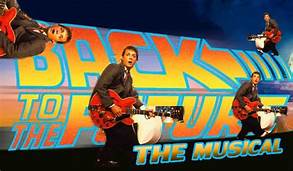 Great Scott!! The long gestating adaptation of Robert Zemeckis’ beloved 1985 classic Back to the Future will finally fly onto stage six years after its initial announcement. The show will play the Manchester Opera House in the U.K. beginning February 20th of 2020. A West End engagement is expected to be announced shortly.

Tony winner John Randon (Urinetown) will direct the musical with original Back to the Future composer Alan Silvestri back for the adaptation. The book will be written by the film’s co-writer, Bob Gale. Set to star as Marty McFly (Michael J. Fox in the film) is Olly Dobson, who previously appeared in the West End in Bat Out of Hell  and Matilda.

An incarnation of the project was first reported in 2012, with the film trilogy’s Oscar-winning director and co-writer Robert Zemeckis tapped to develop the adaptation with his studio ImageMovers. (Zemeckis is still attached as a producer.) Two years later, Zemeckis and Gale announced that the musical would open in the West End in 2015, correlating with the movie’s 30th anniversary, though it was eventually delayed indefinitely.

“Bob Zemeckis and I have been trying to get this project off the ground for years, but good things take time and finally, the time is right,” said Gale. “Our cast is outstanding, the songs are fantastic, and director John Rando is doing an amazing job ensuring the show truly captures the magic of the movie. We’re thrilled that we can retell our story on stage in a brand-new way, and we’re certain that Back to the Future fans all over the world will share our enthusiasm. In the words of Marty McFly, ‘your kids are gonna love it’—and so will you and your parents.”