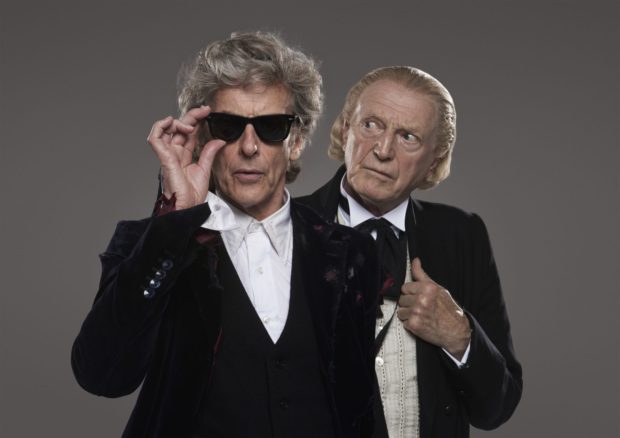 It’s best to avoid social media on Christmas Day anyway, but for Doctor Who fans, it’s even more important. In America, we’re not going to get “Twice Upon a Time” until 9 p.m. Eastern on BBC-America, while the mother BBC will show it earlier in the UK. It’s a small price to pay — remember when we had to wait weeks and months in delay?

This Christmas special marks a lot of changes — it’s the end of Peter Capaldi’s tenure as the Doctor, and if you think he won’t be given a terrific farewell speech by producer Steven Moffat, then you’ve never watched the show. This is Moffat’s swan song as well, paving the way for new showrunner Chris Chibnall. Then one last appearance by Pearl Mackie as Bill, plus a first and last appearance of David Bradley as the First Doctor, something I’ve been hoping would happen since he portrayed William Hartnell in An Adventure in Space and Time. All of that will open the emotional floodgates for Whovians, but then the most important part still — our first glimpse of the 13th Doctor, Jodie Whittaker. I’ll be on radio silence all day.

But I’ll still enjoy the trailer below.

The magical final chapter of the Twelfth Doctor’s (Peter Capaldi) journey sees the Time Lord team up with his former self, the first ever Doctor (David Bradley – Harry Potter, Game of Thrones) and a returning Bill Potts (Pearl Mackie), for one last adventure.

Two Doctors stranded in an Arctic snowscape, refusing to face regeneration. Enchanted glass people, stealing their victims from frozen time. And a World War One captain destined to die on the battlefield, but taken from the trenches to play his part in the Doctor’s story.

An uplifting new tale about the power of hope in humanity’s darkest hours, Twice Upon A Time marks the end of an era. But as the Doctor must face his past to decide his future, his journey is only just beginning.

‘Twice Upon A Time’ premieres Christmas Night at 9/8c on BBC America.

And maybe you’ll want to catch up on a few of the previous Christmas specials? I was hooked into Doctor Who by “The Christmas Invasion,” but “A Christmas Carol” is the one I rewatch every year. And don’t forget that we can watch “Twice Upon a Time” in select movie theaters on December 27 through Fathom Events.