Alternately toiling over a drawing desk and a computer graphics program, Mark Teague provided key artwork for Creative Light Entertainment’s upcoming release, Comic Book: The Movie. But he’s a man of many talents. Though right now he’s focusing on design, he co-wrote, co-directed and starred as Superguy in the mockumentary Superguy: Behind The Cape, a critical favorite film that provokes both laughs and – gasp – thought, as it tackles the question of what would really happen if a superbeing appeared in today’s celebrity-obsessed and lawsuit-happy society?

After spending a few years in television animation, Teague relishes the challenge Scott Zakarin at Creative Light has laid at his feet: oversee the design of the company’s latest film, Jekyll. Hip-deep in storyboarding, the soft-spoken artist graciously took some time out to show me around his office and give Fanboy Planet a sneak peek at some of the designs for the creatures that will appear in this modern take on Robert Louis Stevenson’s classic novella.

At no point did he bend steel in his bare hands, but he did burn a CD of artwork faster than a speeding Commodore 64. 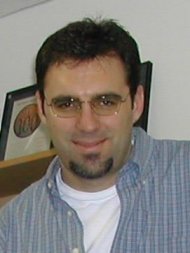 Derek McCaw: You are the full-time Creative Light Production Designer?

Mark Teague: I kind of wear many hats. We met because of a film that I did, Superguy. From there I worked on Comic Book: The Movie. I did all the graphics, the animation, and all the stuff like that. And then I just sort of stayed on.

I’ve been in this business for a long time, mostly in animation. I worked for Disney for six years, and then Marvel Studios. Different companies. I was sort of done with the whole business, but then, I just sort of like the family here. You can wear any hat you want. You just have to show what you can do and you get to do it. Most of the time.

Scott was tooling around with Jekyll. It kind of came out of nowhere. I mean, he had already written it, and then he asked me if I’d be the production designer on it. Sure, I’d like to.

This is the first movie, to me, with Creative Light, where we’re going to keep it close. We’re not going to farm out too much. We’re going to try to use all the guys in the office. In just the year that I’ve been here, it seems like (everybody) is just so talented. Just give them a program and they’ll learn it in a day or two. So we’re just going to try and do as much as we can here.

MT: The effects, editing, you name it. Each guy has made a film before. They’ve been on a set, they’re doing stuff, it’s great. 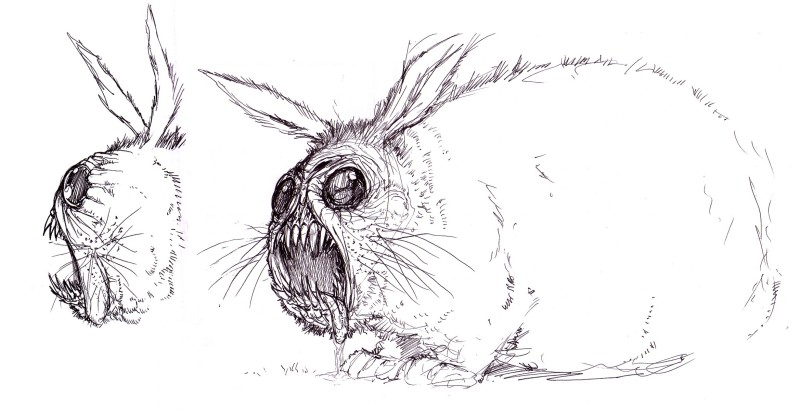 DM: What are the challenges for you, having been handed this Jekyll project? What do you find most intriguing about Jekyll?

MT: Jekyll himself, or the script?

DM: The script. Working on it, what’s your approach?

MT: I’m sort of a horror film freak. I really love the gorey stuff, and I’m a big werewolf fan. Anything werewolves, I love.

When I first read the script…well, to me as a kid, Jekyll and Hyde was the next best thing (to a werewolf). He kind of looked like Wolfman a little bit. You know?

DM: Yeah, if you had the Glow-in-the-Dark models, they did look much alike.

MT: Yeah. Exactly. Very true. When I read the script…I guess I had my own agenda at first, because I was thinking, yeah, gorey film, werewolves and transformations. Because it’s kind of the same old nerdy guy transforming into a hip guy. More of a creature. And Scott said, no, no, no, you’re reading the oldest version. We’re going to do it with a new style. 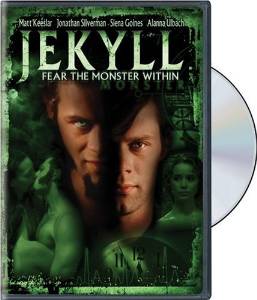 DM: So there was a draft where he was much more monstrous?

MT: Maybe I just read it that way. He just said, no, this is going to be more of an internal change. And that’s the biggest challenge. You know, you could write it any way you want it, but it’s still going to wind up on the screen. The viewers have to see some kind of a contrast. You can only go so internal.

So that’s been a challenge. Trying to figure out different ways, whether it’s high-tech, or just different contact lenses, or maybe even putting the actor in one of those tanning salons where they spray the body, so he’s really tan when he’s Hyde. I just picture him as cool and hip, almost like a rock star. I think of him as Jim Morrison. I go from your average joe, maybe a Mathew Broderick, to a Jim Morrison. That’s a pretty big contrast.

I need those boundaries to work with, so I can tell the guys okay, we’re going this way or that way.

DM: Okay, so I’m not allowed to show the pictures, but I’ve seen that you’re going through a lot of designs for Hyde. It looks like you’re having a hard time settling, but it does all still have a vaguely Victorian look. You’re going to stay with that?

MT: Everybody says that. To me, I don’t really like the top hat idea and the cape and the cane, but the way Scott wrote it in, I think, is brilliant. So it’s kind of paying homage to the traditional Jekyll and Hyde.

I’m just doing that more for fun. I see it as kind of a duster jacket, where his arms will be revealed and stuff like that. When I’m talking to the other storyboard artists, we have to assume that, to me, when he’s Hyde, he’s Batman. He just has the sleek fighting skills of Batman. I think the cape would be fun to use, and twirl around a bit.

The hat – it’s not going to be on through the whole movie. It’s just a few selected scenes.

DM: Just dominating the sketches that are lying around right now. Any other particular challenges? 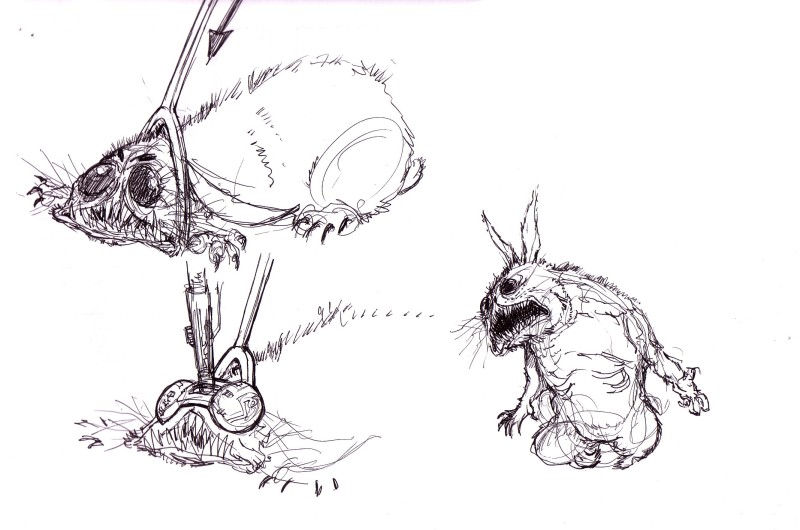 MT: A lot of it is going to be creating the digital arena, the internal stuff that’s going on in his own head. Everybody’s already seen everything. Everything we think of, aw, it’s too Matrix-y, it’s too much like this… The whole challenge is in trying to make it look good. But now we’ve sort of moved on from that, and we just want to tell a good story. I don’t care what we use or how we do it at this point. Just a good story.

The nice thing is that we’ve got Michael Burnett on board, who’s a great creature designer. He’s worked on Buffy and everything. And he’s excited about it. He likes the rabbit I drew.

DM: To backtrack a little, you mentioned Superguy. I think Scott said you’re going to get that released in February.

MT: I think May, actually. Maybe the first quarter.

DM: That was done independently and then picked up by Creative Light in the last year?

MT: It’s been almost three years. It has its own weird cult following. It’s won different awards in festivals. It’s almost like Spinal Tap, but with a superhero. I don’t know if you’ve seen it.

It’s been an interesting roller-coaster ride with that. Before we’d even finished it, we had an option deal with Paramount. We ended up writing a pilot. They optioned it for two years. We wrote the pilot for it, and at the last minute they passed on it, too worried that it was not quite on the mark, a one-trick pony. And now everything’s going to be like that.

Sometimes it’s frustrating, seeing that even Disney is coming out with their superhero film, The Incredibles. And it’s the same thing.

So we played the whole Hollywood gambit for a while. And then we said, okay, we’re done. We got in this festival, about a year ago, Dances With Film, and we had no idea that there was this writer from Variety there. He gave it this incredible write-up on Monday. 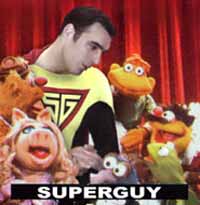 I called up my friend and said, do you think this means anything? And he said not really. We might get a few e-mails here and there. But I checked my e-mail, and there was like thirty e-mails from every studio in Hollywood. My phone started ringing off the hook. For about a month, I did nothing but go to meetings. A lot of, “hey, how are you? I like your movie.” “I like your movie.” “Let’s work together.” “I’ve got another guy coming in about a half an hour – let’s talk next weekend.”

It just went on and on. I got sick of it. I knew I had a good property here. People were paying attention to it. I had already met Scott a year before, so I came back to Scott. I said I just want to get it on the shelf. That’s all I care about. I want people to see it. The big audience to see it. Just go buy it or rent it or whatever. From there we just started working it.

I’m a geek. A big total fanboy geek myself. I love superheroes, sci-fi, monsters, anything. So it was just a great partnership. I had to convince my three partners on Superguy to go in with Creative Light; that was the hardest part. They’re not really…they never really watched superhero cartoons. They weren’t into X-Men and all that stuff. They’re more sci-fi.

DM: So are they working here, too?

MT: They all work at different companies. We really just wanted it sold. Miramax was sort of interested in it, but they passed on it at the last minute. There’s a clip of Superguy in Comic Book: The Movie, for just a second, that we didn’t use in Superguy. It was just me singing the blues in costume.

The clip is actually integrated into Comic Book: The Movie, as Superguy sings in a hotel lounge. Really, it wouldn’t be the weirdest sight you’d ever encounter during Comic-Con.

Thanks again to Mark for showing me his portfolio, some cool designs, and just generally putting up with having me foisted upon him unexpectedly.