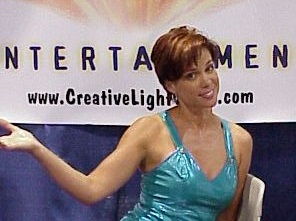 When we first arrived at Comic-Con, my cohorts grabbed me and said in breathy tones of excitement, “Chase Masterson is here!” To which I could only nod rather than betray my ignorance. This ploy didn’t work.

I was quickly informed of Ms. Masterson’s charming presence on Deep Space Nine, and then, later when we started talking with the people at Creative Light Entertainment about Comic Book: The Movie, one of the stars we were offered for interviewing turned out to be…Chase Masterson.

Though Chase has a role in Comic Book: The Movie, her main focus at Comic-Con was to promote a film called Inhuman. Since we interviewed her, it has undergone a name change to the more poetic Creature Unknown, so I’ve made the alteration in the interview transcripts. Check out the site for the film, including excerpts from a pictorial in the July Femme Fatale magazine, run by the same guys who publish Cinefantastique (a.k.a. CFQ).

Ten months later, and I still have not actually seen Chase in Deep Space Nine, but I was pleasantly surprised to discover that she’s in one of my favorite goofy movies of recent years, The Specials – hey, produced by the guy who publishes Femme Fatale and CFQ, Mark A. Altman. There’s a conspiracy here somewhere…or really, just a small circle of people who have good taste in continuing to work with this talented and gracious lady.

Derek McCaw: What can you tell me about Creature Unknown?

Chase Masterson: It is a fabulous sci-fi horror thriller. I was first and most attracted to the project because of the script. It’s got a really fabulous plot and a fabulous twist. I’m really excited to see how that’s going to play out, because it’s all there. 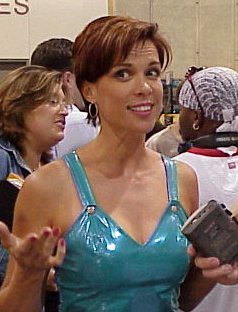 The other reason that I was really excited, now truly glad that I did the film, is because of the director. Michael Burnett is just absolutely brilliant. He is a special effects man, as I’m sure you’ve heard, and he is really fabulous at what he does – a Rick Baker protégé. But he does his own stuff.

Even better than that, he’s just a great director by his own instincts. He really worked beautifully with the actors. What we’ve got here is not just a standard horror genre thriller, but a story with some horror elements. It was shot in mostly subtle ways. I think that’s adding to the suspense and the mystery of what happens in the film.

The cast is just a fabulous group of kids. Maggie Grace is truly an actress to watch, and Chris Hoffman is really, really strong. He plays twins, or, uh, a twin (with twin Matt Hoffman). The rest of the cast, too…

DM: Who do you play?

CM: Oh, I’m sorry. (laughs) I forgot about that, didn’t I? That’s unlike me. I play an ex-doctor named Kat. I have lost my medical license and I also lost a son. I have a breakdown and I move out to the woods. I live there and I conduct medical experiments, because I was a genetic researcher. Basically, I’m involved in a deadly game of genetic manipulation.

DM: So you are responsible for the creature…

CM: I am responsible. We find that out. But you can pretty much know that right now. It’s okay. That we can tell you.
I learned to ride a motorcycle for this film, and I had a great time with that. I also shoot three different kinds of guns: a pistol, a rifle, and a net gun – a gun that shoots a net to capture the creature… 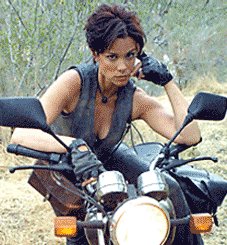 DM: Is net gun under special skills on your resume?

CM: Yes, it’s a new skill. It’s pretty fun. I’m very excited about the fan base seeing it, particularly if they know my work from Star Trek or from some other shows that I’ve done. This role is so far and away different from anything I’ve done before. This is like “Leeta goes Rambo.” I am this tough, kick-ass, motorcycle riding smart chick who takes no prisoners. It’s a far cry from the graceful compassionate sweetness of Leeta.

DM: I didn’t watch Deep Space Nine, so I don’t really know your work there…

DM: Leeta was the character you played on Deep Space Nine?

CM: Yes, I did. People either watch or they don’t, so don’t feel bad. Those who watch really do.

DM: I’m sorry, I stuck with the original series.

CM: Don’t worry about it. It was a great show to be on. And the fan base has been so faithful and such an enthusiastic, great bunch of people, that it’s led to this and other things. So I’m very excited about seeing how this movie turns out, because I think it’s going to be great. 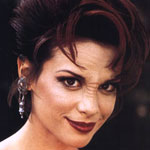 DM: Let’s talk a little bit about your cameo role in Comic Book: The Movie. Are you playing yourself?

CM: I am playing myself. Yes. The cameo is Chase Masterson.

DM: How hard is it to play yourself?

CM: You know, I pretty much do it every day. (laughs) It’s going to be fun, actually, because we’ve got a little bit of improv coming up. The whole movie is improv, as you know. We’re just on our way to shoot that this minute. It’s all good.

DM: Is there a big difference between going to a Star Trek Convention, which I assume you have done…

CM: Oh, many. In fact, I was at one this morning in Vegas. And then I came here. There is a huge difference, actually. In the way that the two conventions look. I mean, you just get so much more wildness and such a vast crowd at a convention like this. At the Trek conventions, it’s a different kind of crowd…um…

DM: This is an awkward question, isn’t it?

CM: No, no, I know exactly what I mean. It’s… it’s… a different kind of crowd, um… Part of me wants to say they’re maybe not quite as wild. But no, they’re pretty wild in their own way. I have a lot of fun at these things. It’s really a blessing to get to go and meet the people that make the show possible, which is the fans. To say to them, “no, it’s nice to meet you.” It really is. You guys are a great, fun sweet, actually very sensitive group of people. I’ve found the fans to be a very compassionate group. I think genre fans in general are a more creative compassionate bunch of people.

DM: I like what Mark Hamill said about it (at a shoot for CB: TM). Genre fans are so in touch with their fantasy lives that they’ve saved thousands upon thousands of dollars on therapy.

CM: (laughs) Yeah. There’s a statistic: seventeen out of the top twenty top-grossing films of all time are genre films. That says a lot about what we’re doing. I mean, it’s popular stuff. I’m very happy to be involved in the genre, to be a part of it.

DM: Were you a fan yourself, or did you just fall into this?

CM: I am a fan. I actually watched Star Trek because I had a boyfriend who was such a Trekkie that I was only allowed to call him during commercials. Yeah.

DM: Did that relationship last? 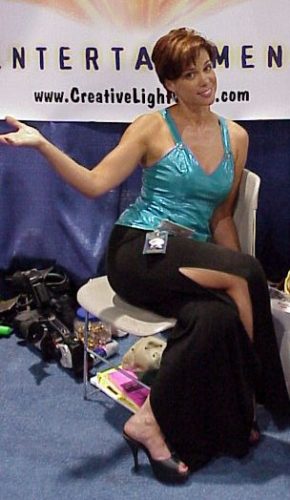 CM: That’s how I started watching the show. I was a fan but not like a fanatic fan. I definitely appreciate the genre. I love the show that I was on; I think that it’s one of the best-written shows in the history of television. So watch it (in re-runs).

DM: Of all the spin-offs of Trek…

DM: Deep Space Nine was the one I liked best.

DM: I’ll spend the rest of my night catching up on that to see episodes with you. I’m sorry.

CM: It’s fine. I think that the range of emotion and situation and circumstance, the range of drama, comedy, pathos, humor, etcetera, was at a real all-time high with Deep Space Nine. And that’s one of the things I appreciate about the genre, because the sky is not even the limit, you know? This is truly a genre where you can make people laugh and cry in almost the same sentence. And then throw in some action and some fun sexy bits, and you’ve got it all.

I’m really happy to be here. Thanks for having me, guys. LOVE YOU!