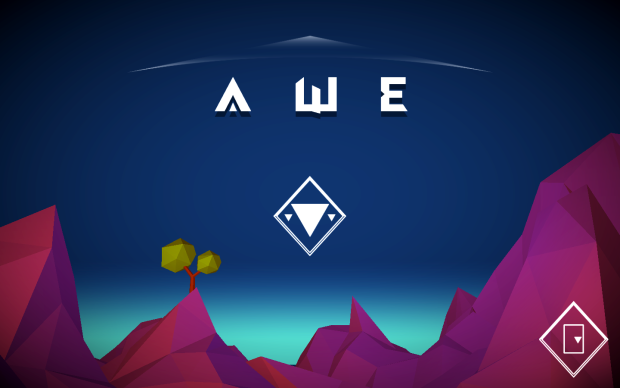 I approached Awe just like most people may. It was indeed cheap, $.99 in the Steam Store, and the idea of playing what appeared to be a simple puzzle game seemed very appealing. After logging about six hours of Destiny, it only seemed fitting to play more video games to round out the day.

I loaded up Awe to a typical type of title screen and I clicked the first shiny thing I saw. Look at the next image and tell me where you would click. I clicked that same thing, and I guess the creators of this game were banking on the fact that everybody would just assume to click the same spot. 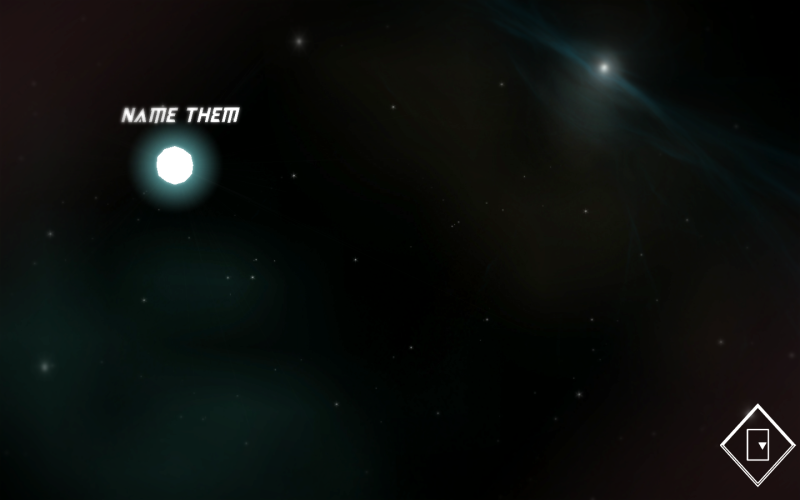 No, there was nothing pointing me toward clicking anything in particular, but I’m one of those “go-getters”, so I clicked the icon in the middle of the screen. It took two clicks to get into the game, and I was transported through a series of non-menus, where it was really just brute force and determination that got me into the actual gameplay. I then was greeted to this screen. 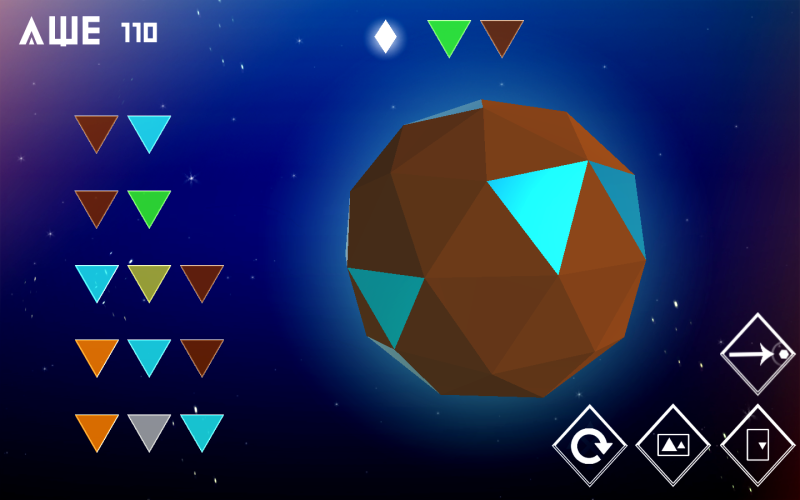 My immediate thought was “what the hell is this?” So I kept clicking. Then, oddly enough, things started to…yeah, you get it.

No, there is no tutorial. There is no hand holding. No readme.doc. This is REAL LIFE, friend.

So once you see this polygonal rock spinning around, beset on all sides by a litany of icons and colored shapes, the only option is to start clicking things. That is where things get really interesting

Awe is billed as a god-game, but it really isn’t- not in the sense of most of the god-games we have seen in the past. It is also billed as a sort of terraforming game, which it just starts to broach with its placement of different resources that change the properties of the triangles on which they sit. 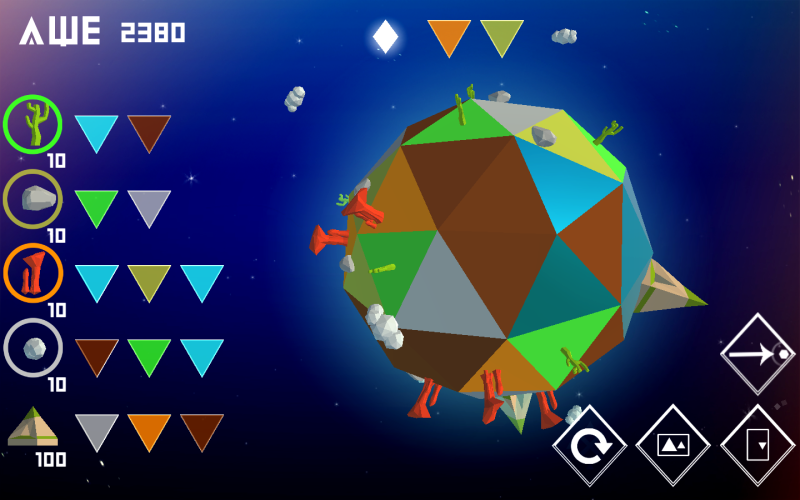 Ah crap…I think I just ruined half the game for all of you.

Anyway. Clicking the colored combinations at the top of the screen spawn glowing triangle type protuberances on the planet, which is the titular “awe” resource, gathered and then spent on dropping different colored tiles, which are then used to complete more colored triangle sequences. Once you put down a certain amount of each resource, you move on to the next planet. Thankfully, each subsequent planet type gets more and more wacky- and the challenge then becomes how to place each resource so you can effectively (and quickly, not that it matters) click all of the resources you need to complete your triangle-click combinations.

What this game really lacks is a sense of imperative. Each planet presents its own challenge- but the challenge involved is not against a clock, or any malevolent force, or even against the player’s previous score. The challenge is just finding out what order in which you need to click on the colored triangles, and arrange them on the planet in a way that is not time-prohibitive. Sometimes there are three triangles to click. Sometimes four. Sometimes you know what the colors are, and sometimes you need to pay attention to the triangles on the left side to see which ones you need to click. In the end, it is what you may imagine a non-confrontational game of Simon would be if it were advanced to the point where it may have been featured on the Holodeck during Encounter at Farpoint.

By the time you finish a planet, it does look quite different, with things all flying and skittering about in orbit. However, the basic formula of each planet really does not change. 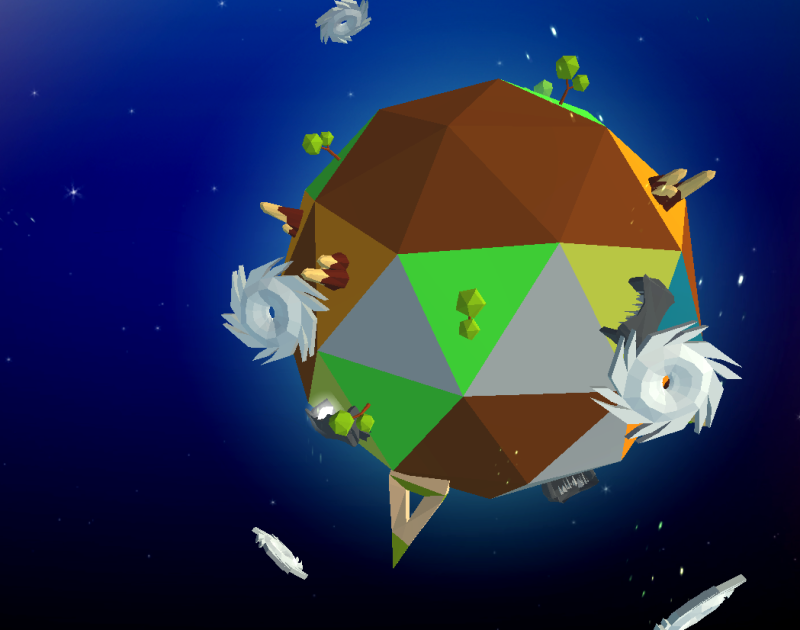 What gets me about this game is how easy it is, while at the same time being very difficult- but its difficulty comes from how much attention you can pay to it. It is certainly not a game you can blaze through while watching The Thin Red Line.

All in all, Awe is visually appealing, with its low-poly (I cannot help but reminisce about Katamari Damacy) art and inviting soundscape (nothing like Katamari Damacy’s earwormy soundtrack). It is the gaming equivalent of listening to Enya- or doing a nice bleary-eyed Sun Salutation. There is a challenge in its very nature as a puzzle, but you accept the challenge only if you need to accept it…you can play the game regardless of whether or not you accept.

There is no adversary. No timer. No antagonist. No protagonist. While Awe’s positive points may be its approachability or its non-challenging nature, its major drawbacks are exactly the same. It is just as easy to put down as it is to pick up- and you will definitely not be agonizing over anything that happened during your play session. After a dozen or so planets, it is difficult to find a reason to keep playing for a long stretch, unless you are really, really stressed…and therein lies the virtue.

Pro tip: if you want to go back to the menu, this is the icon that does it. I’m giving you this one for free. 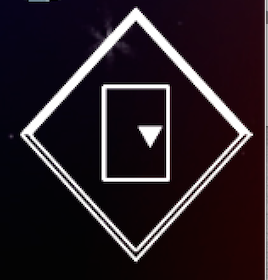 Verdict: Definitely worth a dollar. I imagine you will probably be able to get a good dozen hours or so out of it. If you get more than that, you should probably consider an alternate form of therapy. 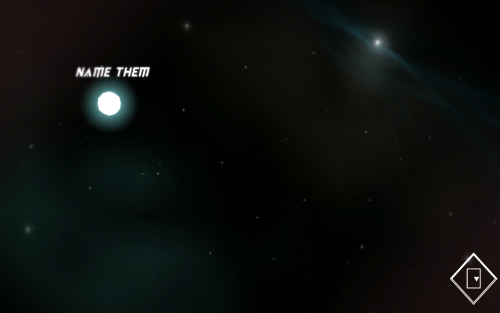 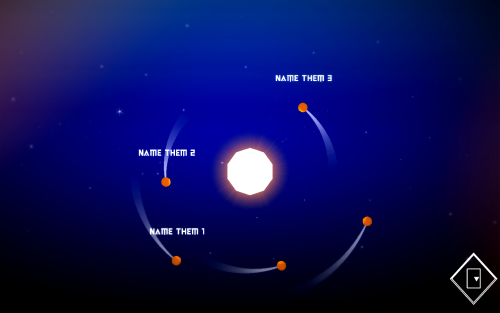 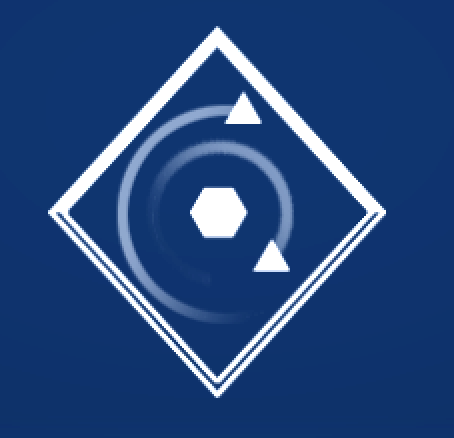