Like a lot of fluffy-haired young men in the eighties, Todd Lucas (Barrett Crake) moved to Reseda from the midwest armed with a dream — to play rhythm and blues the way it was meant to be played.

If the thought of being in L.A. is your first hiccup on that whole “meant to be played” journey, then you’re a step ahead of Todd. Yet sometimes the Lord takes care of fools, and of course, Los Angeles is a city of dreams.

Within one day of settling in, Todd has a job as a glamorist at BJ Maxx’s selling “high quality fashion at affordable prices,” not knowing he should avoid the girls at the clearance rack. And then he meets saxophonist B.J. Fairchild (Myko Olivier), equally wide-eyed but about different things, and somehow they can’t help but click — but only after a montage. 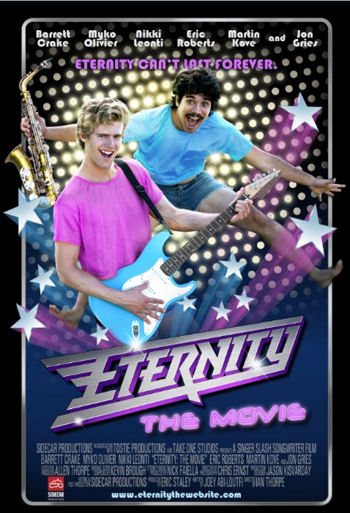 A rags to riches to rags to artistic fulfillment story, Eternity: The Movie isn’t just about how many strange bands rose to the top during the eighties, but also how much cheese made it into movie theaters. Director Ian Thorpe sticks every New World Cinema comedy into a blender with a helping of Mannequin, then dumps the soundtrack of my college years into the mix. It’s strangely satisfying to watch now, but embarrassing to admit that’s what we watched then. I suspect that Thorpe, along with screenwriters Joey Abi-Loutfi and Eric Staley, know that it’s not as painful as we pretend.

It’s note perfect in the over-earnestness of Crake and Olivier, playing broadly and yet coming across as completely sincere. For Olivier, that makes a tricky balance, since B.J. has to straddle between that eighties staple of the obnoxious horndog and the true blue best friend.

Though the two make up the Hall and Oates-like band Eternity, they also form an uneasy romantic triangle with Gina Marie (Nikki Leonti). Like them, she writes songs, though Thorpe spares us her process, and helps Todd get his feet on the ground. Romance isn’t really in the cards, because as B.J. points out, Todd can only write good songs when he’s heartbroken, which leads to subtly hilarious song titles matched with B.J. steering Todd into bad relationships.

Off course, even just talking about his inspirations sparks music videos that perfectly mimic the vibe of the eighties, right down to the film stock.

Yet like This Is Spinal Tap, the music works not because it’s directly parodying hits, but because you can imagine talented yet clueless songwriters turning these songs out. Kudos to Kevin Brough and Nicholas Faiella, with help from Staley — this soundtrack has stayed in my car. If you don’t pay attention to the lyrics, some of these could easily pass as legitimate hits of the eighties — really, is “I Want To Make Love, Not Just Sex” any more blunt a song title than “We Don’t Have To Take Our Clothes Off (To Have a Good Time)”? 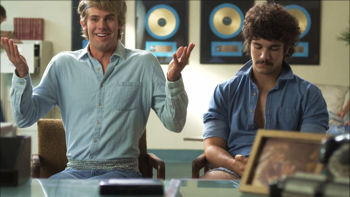 And that song led to drinking cherry wine. Eternity prefers to indulge in “Sambuca & Cider.” Yes, a double entendre can be found within the lyrics — within most of them — but it’s just this side of plausible that Todd doesn’t realize it.

The masterpiece, though, is “Don’t Let Go,” which is straight up out of the days that Hall & Oates ruled the charts — no joke, just perfectly listenable pop pretending to be R&B. If only Eternity’s album “Rhythm & Hues” could truly sit on my CD shelf next to “Rock & Soul (part one),” they would be indistinguishable.

Thorpe sprinkles in a few cameos from ’80s actors, too, but not too heavy-handedly. Eric Roberts chews through his brief moments, but Martin Kove and Jon Gries really create characters — still over-the-top — that fit in knowingly without winking at the audience. It’s great to see that for Gries in particular, one of those rock solid character actors even from his youngest days that never quite broke out of “oh, THAT guy” status. 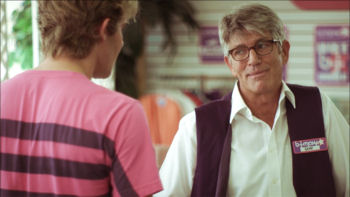 As for that glamorist status, let’s just say that costumer Nicole Abi-Loutfi got it down cold, and for the sake of my dignity, we’ll leave it at that. Yes, I had a single cross earring.

And so Eternity: The Movie strikes just the right chord, reveling in its cheesiness yet getting it right, with even a title card that reflects off of Xanadu. Those eighties, those were times that had best been seen to be believed, and so, I believe in Eternity: The Movie.