Charlie Griak’s Nina of the Woods accomplishes many interesting things, but two in particular stand out. As co-writer/co-producer/director, it really is a Charlie Griak film. And he’s also set up the rare fictional reality TV program, Truth Stalkers, that seems like it could be a real show.

But of course, even if it were real, it’s not real. Host/producer Jeremy (Daniel Bielinski) wants to take a crew out into the woods of Minnesota hunting Bigfoot, and needs to cast an actor as a local resident. Someone who can play haunted by vague childhood experiences out in the wild — but as it turns out, Nina Noon (Megan Hensley) has forgotten that it really is true for her.

The film gives a glimpse of her self-doubt, and flashes of her childhood. She moved to LA to be an actor, and as Jeremy sardonically points out, she has to come home for her big break. When the crew does venture to the edge of the woods, it’s no accident that it feels a bit like traveling through time. Their guide (Shawn Patrick Boyd) has a stronger sense of the danger than they do — to Jeremy, this is for the rubes, an exercise in doubt, fear, and b.s. so their audience can feel superior.

But what Griak is after is dread and uncertainty. In that, Nina of the Woods delivers beautifully. As the crew blunders into a clearing and exaggerates a few moments for the camera, things gently unravel. Or are they all being spun in a web by something larger than themselves? (And we don’t mean Bigfoot — though maybe he’s involved.) 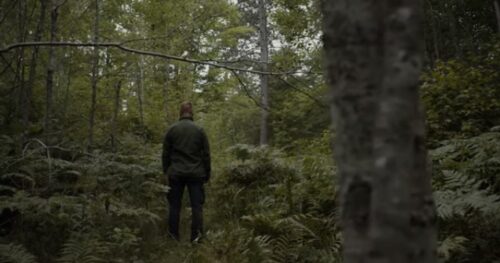 What we have here is meditative horror. The film recreates the unease that comes with facing the inexplicable, and does so artfully but simply. To point out the precision of the shot composition — beautifully captured by Buck Holzemer and Gregory R. Winter — might spoil some of it. Just know that this is a film that will reward repeat viewings — subtle details to be revealed once you think you know what’s going on.

And that’s left inconclusive, too. Griak (and co-writer Neto DePaula Pimenta) venture into territory carved by David Lynch and others, but with a gentler hand. There’s fear here, but also inspiration. Griak isn’t showing us a nightmare, just what might be a disturbing dream. Anchored by solid performances all around, the events can’t be easily dismissed. Often underplaying (that’s a good thing), the actors seem believably shaken, and yet, like people really would be, keep trying to make sense of it. The only one who knows you can’t make sense of it is The Guide, in tune with nature, and maybe more than he seems.

There are horror movies, and there are rare horror films, Nina of the Woods qualifies as the latter.

Note: Though not directly related, watching Nina of the Woods brought to mind two graphic novels that captured the same sense of dread with an element or two in common. For fun, I’m including links below – they’re good reads. Fanboy Planet is affiliated with Amazon, so any purchases you make here may create revenue for the site.