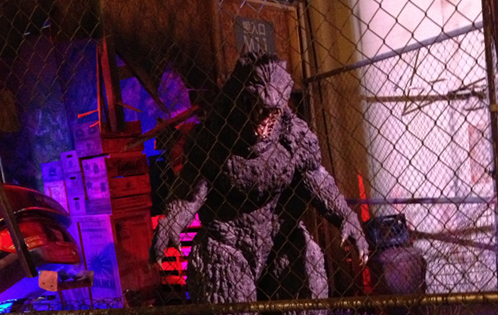 “When mankind falls into conflict with nature, monsters are born.”

So Legendary Entertainment would have us believe, and they have a way of making it seem fun.

Hands down, the single best thing I have ever seen at a Comic-Con. I’ve described it to friends, and they agreed — never seen anything that complex at the Con. And as Comic-Con International only gets larger, more popular and so ridiculously wild, Legendary’s Godzilla Encounter has only set the bar. Somebody is going to have to try and raise it next year.

It’s just hard to see how they can do it.

And let us remember that it’s for a film that has barely started production for next summer’s cinematic swath of destruction — the American Godzilla that, hopefully, we’ll all be eager to remember exists. 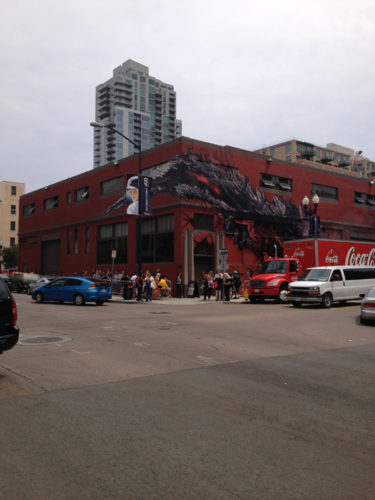 It began with the downloading of an app from Legendary’s Godzilla Encounter website.(You can still get the app — perhaps it will activate throughout the year at other events.) The app itself provided a geiger counter to lead congoers around the Gaslamp District — the higher the radiation count, the closer you were to the Godzilla Museum.

Located a couple of blocks north of Petco Park, sure, the brick warehouse seemed tricked out from the outside, but that could not prepare one for just how cool it was inside. Conventioneers might also have stopped by the Legendary booth inside the exhibit hall, but I’ll admit I used the power of the press to bully my way in and expose the truth behind the imminent invasion of a giant lizard from the Sea of Tokyo. 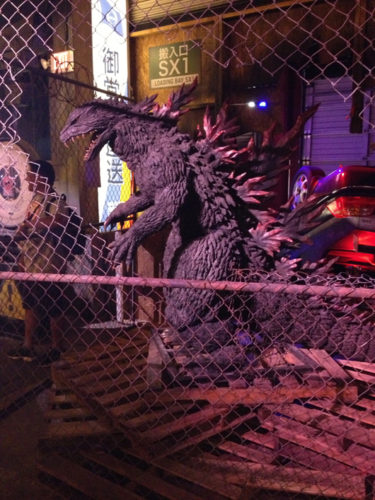 A hapless tour group was led inside to an exhibit demonstrating the cultural power of Godzilla — the Toho suit from Godzilla: Millennium stood behind wire fencing — and it’s kind of weird how at only six feet tall it’s still pretty imposing.

The room was a mishmash of Japanese culture high and low — and areas where Godzilla’s influence had been felt. A facade of a video store dominated one wall, with a suspcious amount of DVD covers for Godzilla movies. Posters, tattered handbills and even a couple of newspaper front pages festooned another wall.

Then there was a ramen bar with a patron, quietly reading a newspaper. Though not interested in conversation, he was at least polite, and a bizarre reminder of the human scale of the destruction in a monster movie. Because within minutes, we were all caught up in one.

For suddenly, alarms went off. Hazmat-suited workers rushed in to evacuate us, as radiation levels allegedly spiked. Thankfully, everyone remained calm, passing the display of manga featuring Godzilla and heading into a large control room. For some reason, they needed our help to throw switches, press buttons, and generally bring Godzilla into view on their screens.

Not that that necessarily worked, though everyone got evidence something BIG was headed towards San Diego after wreaking destruction in Tokyo Bay. So big, in fact, that it would soon shake the building with each massive step. 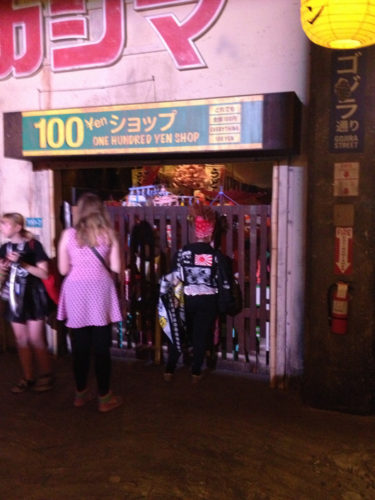 The evacuation continued onto a large elevator which would take us to a waiting helicopter on the roof. But of course, the elevator broke. Rather than hurtling us to the ground, the lift opened onto an office floor with the lights out.

Sure, we escaped. We’d seen something we’re not supposed to see… at least until the trailers for Legendary’s Godzillai hit the internet within a couple of months. As we walked out, enthusiastic workers handed out copies of the Mondo Cinema poster for Godzilla.

We stumbled back toward the Convention Center, changed by what we’d seen. Or at least completely ruined for NBC’s small installation for Dracula.

We had already seen the King of the Monsters. 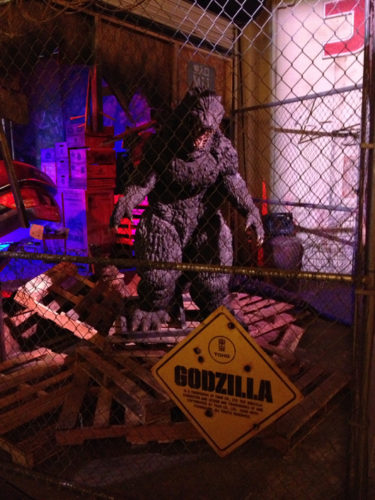