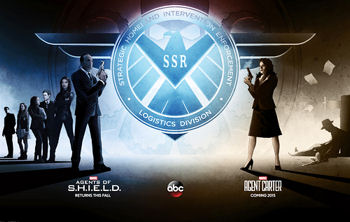 A few months ago, James Gunn caused a stir with a comment that Marvel was going to skip Comic-Con this year. A quick look at the exhibit hall map proved that the remark was misinterpreted. Marvel Comics will definitely be there, dominating the floor. But Marvel Studios would not be presenting anything from Ant-Man (opening two weeks after Comic-Con this year), Captain America: Civil War, or Doctor Strange. (I wouldn’t rule out them having concept art posters to cause everyone to mob the Marvel booth, however.)

Today, though, Marvel announced that Marvel Television would still be attending — so even though “it’s all connected,” as Jeph Loeb likes to say, it’s not so connected that Television does the same thing as the movie production arm.

We’re getting both animation and live-action at Comic-Con this summer, and really — that will keep fans satisfied until D23, where the movie news is likely to spring. With a ton of people from Agents of S.H.I.E.L.D. and Agent Carter, the autograph session is going to be mobbed!

On Friday, July 10th, the world-famous Marvel Television Presents panel returns as Jeph Loeb (Marvel’s Head of Television) brings you exclusive news and surprises about your favorite action-packed Marvel series on ABC. Join Jeph, showrunners, and the casts of Marvel’s Agents of S.H.I.E.L.D. and Marvel’s Agent Carter for this must-see panel that’ll have everyone talking!

You’ll also have a chance to meet with the stars of your favorite Marvel Television series on ABC at two exclusive signing events at the Marvel booth (#2329) on Saturday, July 11th

Please note that both signings are ticketed events and passes will be available on a first-come, first-served lottery basis beginning at 9:30 AM on Saturday, July 11th at the Marvel Booth (#2329).