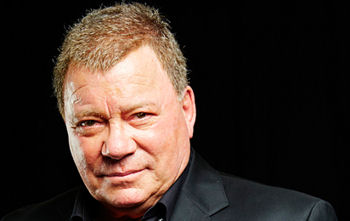 On Thursday, July 9, actor/writer/director/raconteur William Shatner will be appearing at Comic-Con to read excerpts from The Autobiography of James T. Kirk. You know, it’s close enough for me.

Moderated by the book’s actual author, David Goodman, the panel’s time and place has not yet been announced. Comic-Con has not officially released the schedule yet; right now, everybody can say what day their panels are, but not anything more than that.

Regardless, this just shot up to the top of my to do list for Comic-Con.

The book, recently announced on StarTrek.com, covers “… the greatest Starfleet captain’s life, from his boyhood on an Iowa farm and his youth spent on Tarsus IV, to his time in Starfleet Academy, his meteoric rise through the ranks of Starfleet and his illustrious career at the helm of the Enterprise.”

Shatner should do it justice. Apparently, he has some sort of familiarity with the character.