It’s overdue. One of Marvel’s breakout characters of the last five years has been Gwen Stacy, of an alternate Earth in the “Spider-Verse.” On that Earth, Gwen was the one bitten by the radioactive spider, and Peter Parker was the person whose death Gwen believes she could have stopped. Though in recent years, she has gone by the identity of “Ghost Spider,” the book has been consistently called “Spider-Gwen,” which as a superhero name would have been a dead giveaway as to her identity. Just ask Steel Sterling or Iron Munroe.

It looks like Marvel Comics will officially rebrand her as Ghost Spider to the general public, and just in time. With Sony going all in on the Spider-Verse, and very clearly including Ghost Spider in the upcoming animated film, the public needs to know that new name in superherodom. And let’s be honest — Gwen’s band, the Mary Janes, could be bigger than the Archies.

Other names they need to know in the Spider-Verse (so look for new books and announcements): Venom, Morbius, Silk, the Black Cat, Silver Sable, and probably Spider-Man Noir. But for now, all Marvel is teasing for Comic-Con is Ghost Spider. 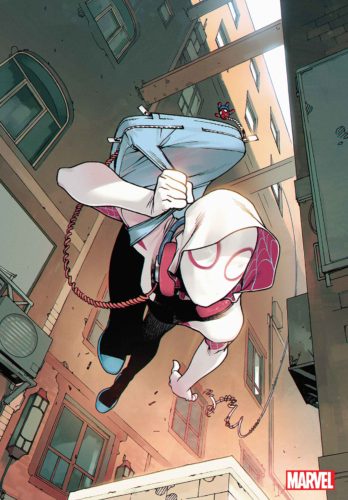