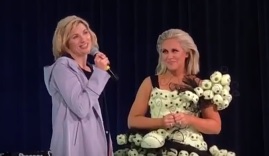 In the midst of this year’s Her Universe fashion show, founder Ashley Eckstein stepped forward and apologized for a last-minute addition to the line-up, a model who was late but who really wanted to walk the runway. And since it was the day of Comic-Con in which the new Doctor Who crew had been introduced, it was appropriate that the model would be wearing some new Whovian fashion.

From the moment she stepped on to the runway, though, the model looked familiar. Head down, hair dangling, it was clear she was almost made for the jacket that looked like the 13th Doctor’s. Of course, it’s because she is the 13th Doctor, making a surprise appearance for fans and to talk with an excited Eckstein.

In the course of their conversation, Jodie Whittaker revealed the reasons for why the Doctor’s outfit is the way it is — something that cosplayers always want to know. Luckily, new producer Chris Chibnall was in the audience and okay with the information Whittaker was spilling to Eckstein. Whittaker’s reasoning for the outfit is inspiring, and once again driving home the message of hope that the Doctor represents, a message we need now more than ever. And proving that Jodie Whittaker is the Doctor we need.