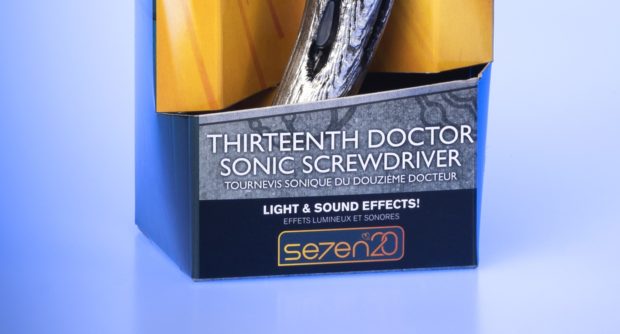 While not much could be revealed on today’s Doctor Who panel in Hall H, the team was able to unveil a surprise — the first appearance of the 13th Doctor’s sonic screwdriver. New producer Chris Chibnall kept cagey about how the Doctor would come by it, alluding to it possibly being culled together from various spare parts. (One thing conspicuously absent from the trailer also presented — the TARDIS.)

After Jodie Whittaker acted surprised to find the sonic screwdriver behind her name card on the panel, she held it up for all to see while it was announced that — surprise! — it was now available for purchase at the BBC booth in the exhibit hall. Within minutes, BBC-America had also sent out this photo of the sonic in its packaging.

Yes, it does look like it’s pulled from various pieces of alien tech. It’s also a little reminiscent of the sonic lipstick that River Song has, but it also seems more organic and sharp-edged. That it might be used as a blunt weapon seems doubtful, as Whittaker reminded the audience that the Doctor remains a pacifist.

We’ll see for sure sometime in the Fall — Chibnall did confirm that the sonic screwdriver will be assembled in the first episode. In the meantime, kids (and cosplaying adults) can have fun imagining its abilities. 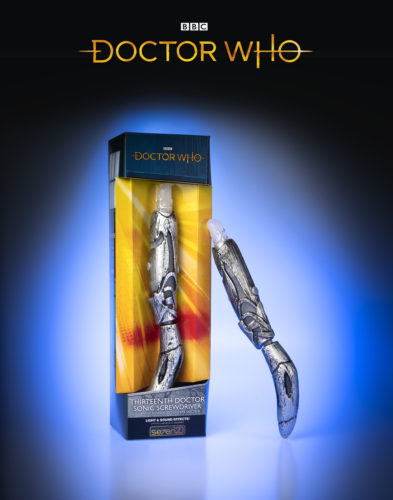 Further details came from BBC-America, including where to pre-order it starting on Wednesday:

Designer Arwel Wyn Jones talked through the new Sonic, “It’s a privilege to have been asked to redesign the iconic Sonic Screwdriver for the Thirteenth Doctor and a new generation of audiences.  I can’t wait for people to see how the Doctor acquires it.”

A limited quantity of Sonic Screwdriver Collectibles will be available to purchase at the BBC Shop at BBC AMERICA’s booth #4129 for fans attending San Diego Comic-Con.  The product will also be available for pre-order starting on Wednesday, July 25th using the following links: