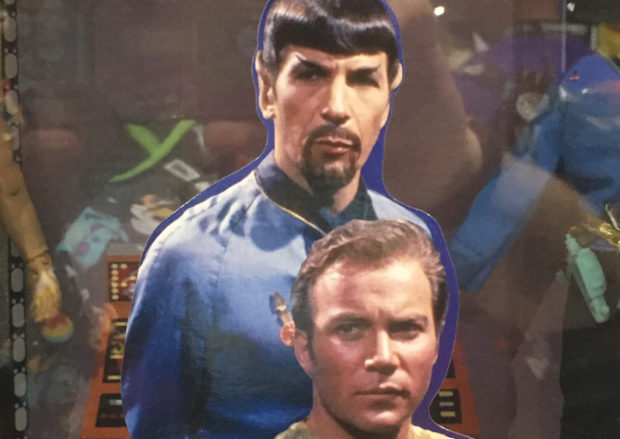 When you talk about “the toys that made us,” it’s not just a documentary series on Netflix. Some kids knew about Action Jackson, Mego’s 8-inch adventure hero with decent accessories and an incredibly catchy theme song. But when Mego released the first four of their World’s Greatest Superhero line, those were the toys for me — and for most of my friends. G.I. Who?

Mego ruled the 1970s, until Star Wars came along. Then it was neck and neck for a while, but after a glorious moment of Micronauts, Mego couldn’t compete with the galaxy far, far away, nor the coming Transformers and Masters of the Universe.

But now it’s back — with some surprising action figures.

We talked to Mego president Marty Abrams on the podcast, as he was preparing to officially relaunch the Mego brand at Comic-Con last week. Then he couldn’t tell us much about what they were going to have, because Target, the exclusive carrier of Mego toys, wanted a big Comic-Con reveal. The first wave will hit Target on August 1st, and it’s a mixed bag. 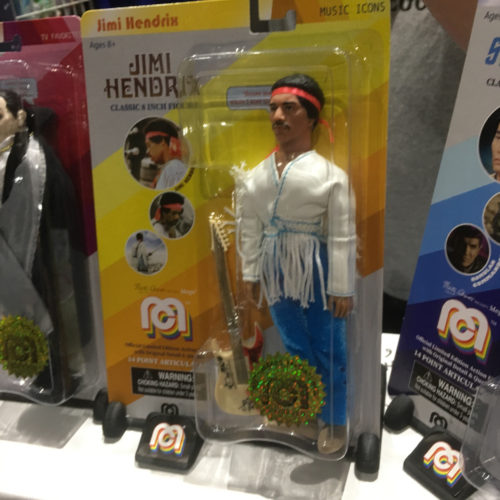 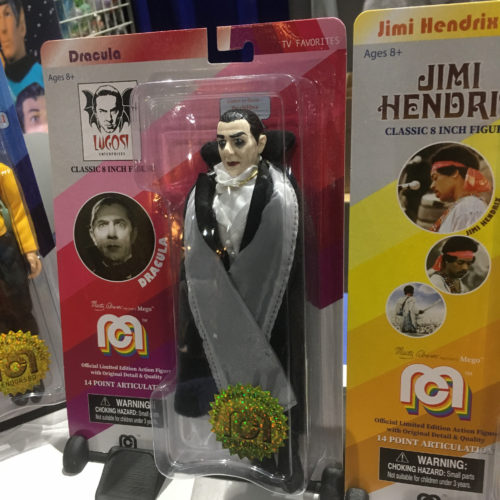 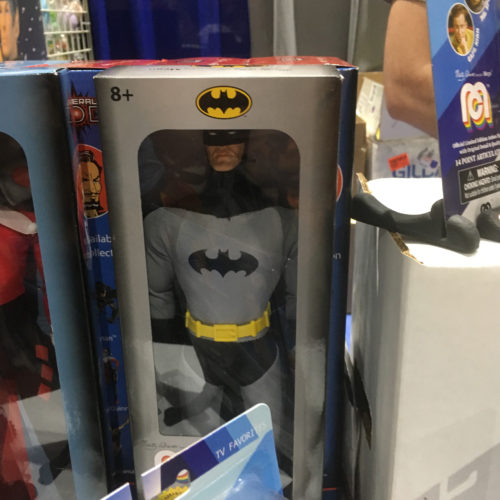 It’s hard to imagine kids clamoring for the Jimi Hendrix figure, but maybe Dracula will catch their attention in the 8 inch line. (Hendrix was a science fiction fan, so maybe just maybe he would have loved to have an action figure of himself.) Unexpectedly, Mego will also have 12″ figures — a version of Batman different than the one they did in the 70s, and the vaguely cinematic General Zod along with new license Harley Quinn. Because you can’t do anything with DC these days without Harley Quinn.

They’ve branched out to some interesting TV properties — that feels like mostly hitting the nostalgia market. Then again, that could be a very lucrative market. I’m happy to report that the Fonz is back, with thumbs up action. Aaaaaaaaaaay… notice that of the other Brady Bunch figures listed on the Alice card, they’re doing a figure of Marsha after she was hit by the football. So there’s a sense of humor about these figures, and also a sense of trying to do something different than what they did in the 70s. 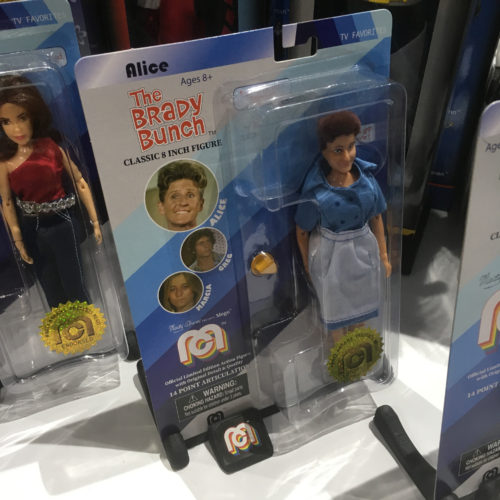 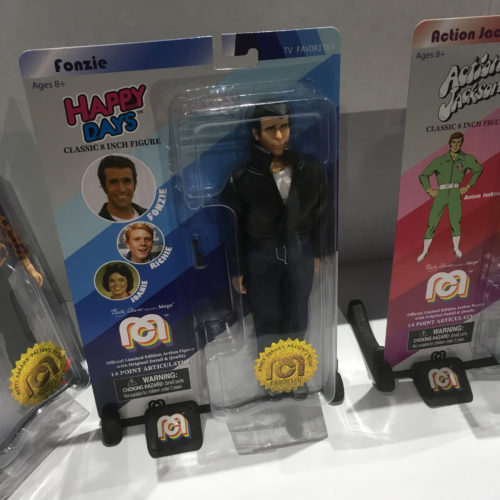 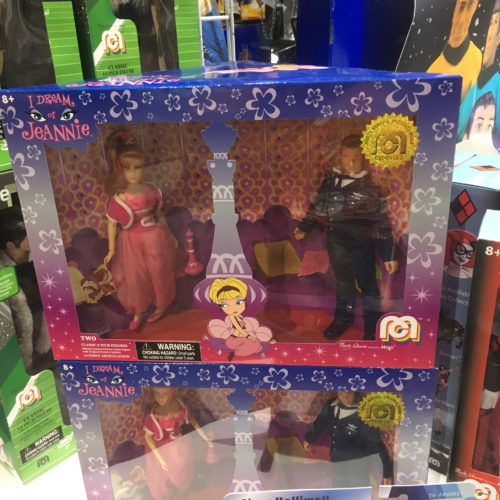 That “something a little different” applies to the biggest surprise of the relaunch — and the line that I think is most likely to wildly succeed. Mego has Star Trek again, and they’re doing it as a mixture of what was popular originally with some new stuff. 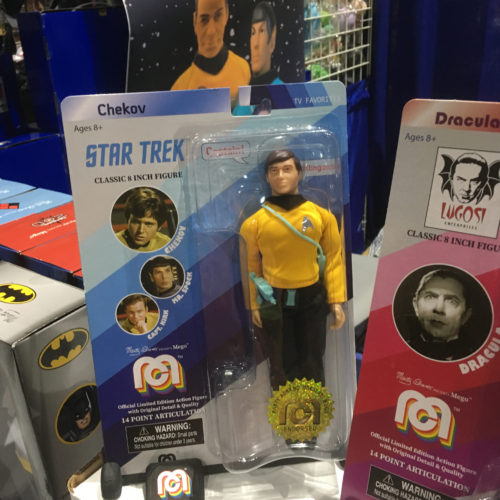 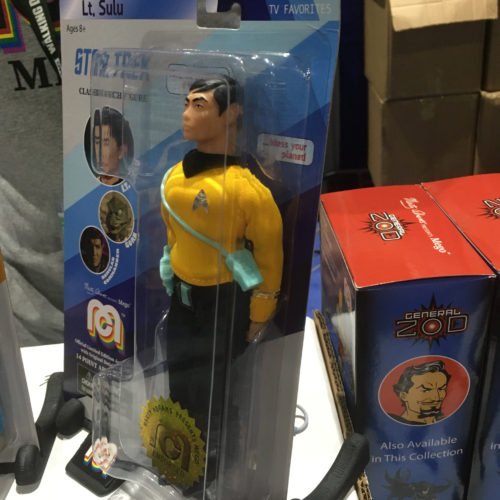 For decades, a toy enthusiast nick-named Dr. Mego has kept the flame alive for other collectors — providing replacement costumes, belts, gloves, boots, and the like. Mego brought him on board, particularly for the Star Trek line, and he wanted to create something truly new — hence the Mego figures I could never have dreamed I would see: Kirk and Spock from “Mirror, Mirror.” Chekov and Sulu are faithful reproductions of the original look of the figures — though Chekov is new to the line — but when Kirk gets a solo carded figure, he will be wearing the green tunic instead of the yellow shirt the original figure had. 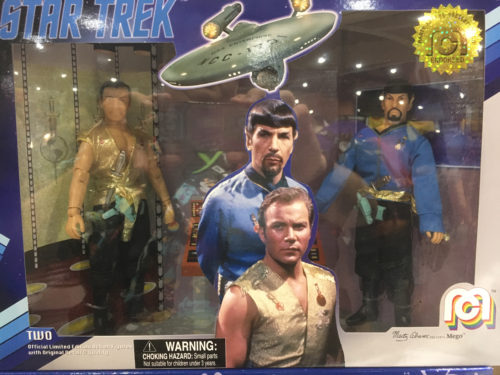 Single figures are going to retail for $14.99, while boxed sets — likely more for the collectors’ market with actual “sets” — will be $40. And in less than a week, you can find them at your local Target. UPDATE: I’ve seen reports online that some Targets have stocked them already. Check your local store.