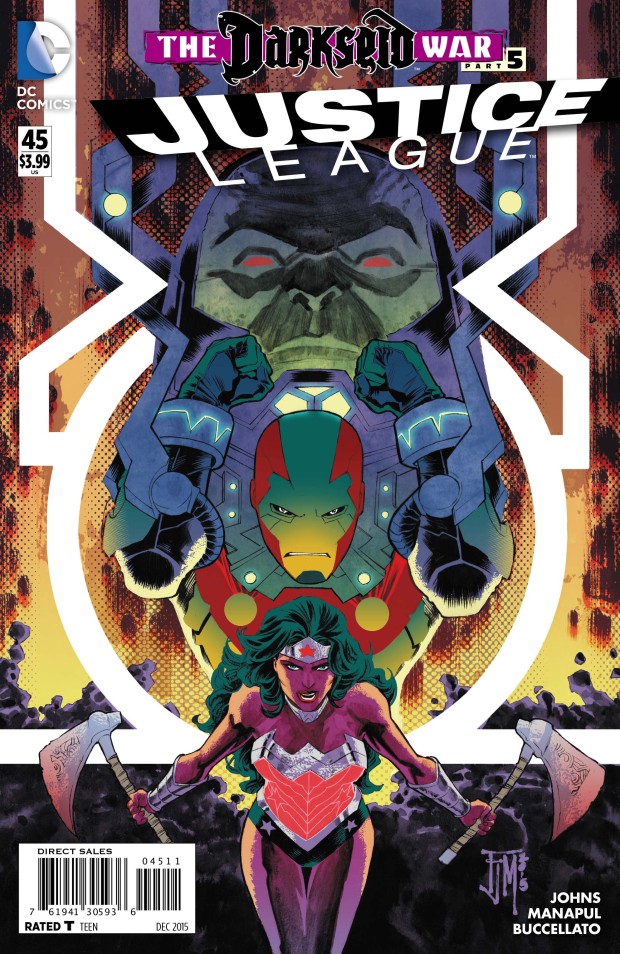 When Jack Kirby created The Fourth World Saga, it was meant as a way of moving things forward. Even calling his characters “the New Gods” meant that the old gods — Thor, Odin, etc. — had existed and been replaced after Ragnarok. These new gods, too, were meant to end, in a graphic novel written and drawn by Kirby called The Hunger Dogs.

We tend to forget that ending, because marketing and the endless nature of superheroes means that for everybody, not just Superman, comics portray a never-ending battle. But deep in their hearts, creators know that stories have to move forward, end, and renew. New new gods must ascend. Back in 1985, Marv Wolfman and George Perez ended some stories with Crisis on Infinite Earths, the saga that killed The Flash and Supergirl (two of the most popular characters in America thirty years later), and gave us the bizarrely named (when taken out of context) Anti-Monitor.

Almost twenty-five years later, Grant Morrison wanted to take the story a step further. When Final Crisis was announced, it was with the silhouettes of DC’s most iconic heroes and the tag line “Heroes die. Legends live forever.” DC had set the table with replacements for their “Big 7,” and to Morrison, it only made sense that the originals should become legends, and take their place as the new pantheon of the multiverse. Their proteges would be the heroes of Earth; the former Justice League would be the gods.

Instead, Final Crisis became about Superman realizing that he was something different, and in Morrison’s mind, more important: a story. A story that can inspire, a story that gives guidance and hope, and (in Morrison’s mind) a story that can shape the world. Read Super Gods by Morrison and you’ll see that explained better. My point is — he didn’t get to do the story he’d originally intended to do.

But on the same day that Morrison’s The Multiversity gets the deluxe hardcover treatment, his latest treatise on the nature of reality and superheroes and multiverses, DC also releases Justice League #45, chapter five in “The Darkseid War.” It’s presumably the more easily accessible version of Morrison’s original Final Crisis pitch, written by fellow superstar writer and DC Comics Chief Creative Officer Geoff Johns.

For here comes that Anti-Monitor from thirty years ago, given a new context by Johns. Johns hates loopholes in continuity, even when nobody else sees them. Everything has to be connected, and where Morrison is content to let it be sloppy and contradictory but included, Johns has to tie it all together.

So the Anti-Monitor has been revealed as Mobius, the inventor of the Mobius Chair, one of the first elements we saw decades ago in Kirby’s New Gods. At the beginning of “The Darkseid War,” Batman sat in the chair previously occupied by the mysterious Metron. With this issue, Johns makes explicit what we’ve already guessed — Batman has become a god, specifically the god of Knowledge.

And he’s not alone.

For a while, Wonder Woman has been officially the goddess of War, but that hasn’t been acknowledged here. Instead, other members of the Justice League begin their ascension in the wake of Darkseid’s death, presumably as new gods of Apokolips, because outside of Mister Miracle, the gods of New Genesis have been almost immaterial to this story.

It’s a bit jumbled because we’re still in the middle, but the idea is a cool one, as it was years ago when first considered. If taken as a stand-alone epic, this could be huge. But it has a little bit of bitterness to it because there’s just no way this can stand. Batman can’t continue cruising the cosmos in a chair instead of a Batmobile; we already know that back in Batman, Jim Gordon’s time wearing an armored bat-suit is limited.

Still, Johns’ choice of who becomes what is appropriate and interesting, with a snake in the potential garden of Eden that plants the seeds for all of its undoing. The story is writ large, but it’s not quite as meditative on the nature of reality as Final Crisis was. In the end, it’s just about providing superhero action, with characters illuminated for a brief while before being reset.

It’s also brought out the best in artist Francis Manapul. The book appears to be shot directly from his pencils, and he’s collaborated on coloring with Brian Buccellato, integrating line and shade to its finest effect. It’s a shift from previous issues, which had the more traditional inked lines, and it’s appropriate for the shift in the story. An epic like this needs to be portrayed with imagery that sears into the reader’s mind, and Manapul’s takes on Superman and The Flash, altered by Apokolips, stick vividly. But it’s also the most human portraits that resonate — Lex Luthor, badly beaten, but still with the arrogance that makes him the hero/villain we love to hate.