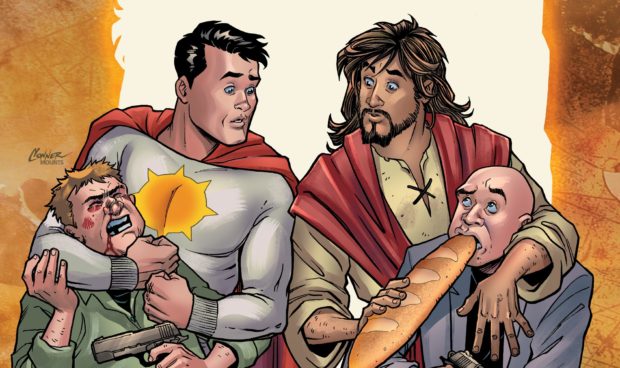 Some of you might be offended by Second Coming #1, just because of its premise. Jesus returns to Earth and teams up with a superhero, Superman analog Sunstar. It’s okay if you stop there, and I’ll admit right now that I had a difficult time with much of Mark Russell’s portrayal of Jehovah (but not Jesus). I read through, though, and think I got what Russell was doing — taking a crass “Old Testament” portrayal to contrast with Jesus and His message, and point out how Old Testament we seem to be behaving in the modern world.

Once Russell gets to telling Jesus’ story, he spends pages being mostly reverent. We see the human side, and the need for Jesus to experience humanity. There’s a tragic twist on a well-known New Testament story, and it’s a beautiful moment drawn by Richard Pace. It breathes, and elicits a slight hitch in that breath. Even if the message is about love, there’s still room for sorrow… and forgiveness.

And in the 21st century, of course, we prefer our saviors to be superhuman, not sublimely human. Sent from another planet, Sunstar wants desperately to walk among us as a normal person, to marry, to have a child. But he can’t, because he’s a superhero, and Jehovah sees him as the perfect role model to show Jesus how to bring some thunder to those followers who keep not listening to Him. 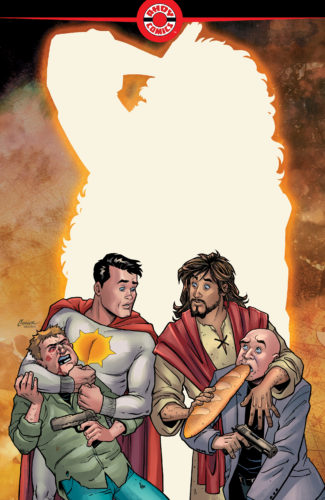 It’s not the first time Russell has waded into controversy by examining religion. Back in Bedrock when he was writing The Flintstones, he tackled the issue head on without using established religious figures. This time around, Russell might not be struggling with his own faith, or even attacking yours; he’s just making you question.

Pace also resists exaggeration in his portrayals. Though dealing with different definitions of superior beings, they all look so potentially regular. Sunstone isn’t particularly muscled; his clothes are even just a little bit baggy. Each shot of Jesus has compassion in His eyes. These two have much to teach each other, even if it’s not what Jehovah wants.

Second Coming rewards the read, and as a first issue, it sets up a lot of promise. That promise includes that you will be challenged in your thinking, and that you may have to read each issue a couple of times. But that just makes it all richer.

This book was originally to be released by Vertigo Comics, DC’s recently retired “mature readers” imprint. Due to its controversial nature, it was dropped by them, but found a home at Ahoy Comics, a publisher rapidly staking a claim as original and innovative. After you’ve picked up Second Coming, look deeper into their catalog. Not everything there is as controversial, but it’s all as good.