Superman has had enough of Darkseid’s attempts to take over the Earth. With the backing of Batman and Wonder Woman, he convinces the Justice Leagues light and dark to take the battle to Apokolips. It ends badly.

And that’s just the first five minutes of Justice League Dark: Apokolips War. The continuity that producer James Tucker established with Justice League: War – with a possible side-trip into The Flashpoint Paradox — comes to an end. Though, of course, nothing ever ends when legends are concerned.

It’s a bold wrap up. With slightly lower monetary stakes than the Marvel Cinematic Universe had, the DC Universe animated projects can be more daring. If you see a resemblance to Endgame, it’s only surface. Tucker, along with co-producer James Krieg, directors Matt Peters and Christina Sotta, know that even if it’s wordplay, when you bring Apokolips, eventually you have to bring about Apocalypse. Screenwriters Ernie Altbacker and Mairghread Scott have many pieces to put into play. They lightly lift a few elements from comics’ “The Darkseid War,” though owe more to Jack Kirby’s Fourth World Saga. It all blends into something new and resoundingly final. 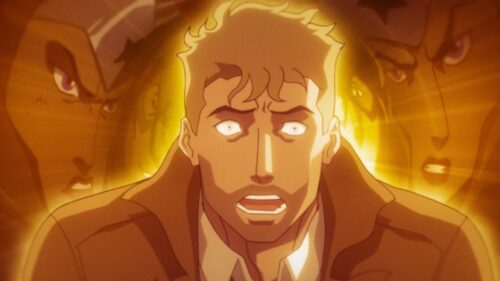 After the failed attack on Apokolips, the few remaining “heroes,” including the Suicide Squad, hide in plain sight while Darkseid (Tony Todd) goes about plundering the Earth of its resources. Overseen by Batman in the Moebius Chair (Jason O’Mara) and middleman Lex Luthor (Rainn Wilson). A kryptonite-poisoned Superman (Jerry O’Connell) works with Raven (Taissa Farmiga) to find Constantine (Matt Ryan). The shabby mage may hold the key to turning things around, but he’s given up, far more interested in drinking himself into oblivion with Etrigan the Demon (Ray Chase). For his part, the Demon is so depressed he can’t even bring himself to rhyme anymore.

With such a crowded cast, it’s hard to give fair time to fan favorites, but there is a reason this is under the Justice League Dark banner. It’s really Constantine’s show, and if he’s a little cleaner and more superheroic in this universe than in his original incarnation, that’s what popularity and licensing possibilities will do to a rogue. (See: Quinn, Harley, also represented here.)

The action never stops. The fates of the heroes are often gruesome. This animated film earns its R rating, but it really raises the stakes. Not everybody will make it out alive, and if they do, has too much damage been done?

Only legends live forever, but the way they do that is by having a definitive ending. Apokolips War provides that, and more. It’s definitely worth seeking out, and you get a bonus short with Adam Strange, a sad elegaic piece that fits with the main feature tonally, reminding that there’s always a price to pay for heroism. 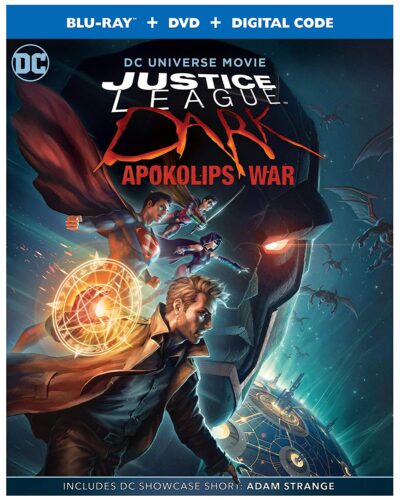