In standard science fiction, answering a distress signal always leads to life or death struggle and a countdown to impending doom. For the Doctor and Martha, this is no different. Materialising on a cargo ship that is falling into a sun and then, inevitably, being cut off from the T.A.R.D.I.S. the dynamic duo face a race against time to reboot the engine systems before the ship’s energy shields collapse and they all burn.

Things are not made any easier by the fact that the ship has gone into lock down, meaning there are thirty plus doors between bridge and the engine bay, all of which have to be manually overridden. To make matters worse, some of the crew have become possessed by an alien entity that is determined to make the ship fly into the sun.

The high production values of the new season continue, with the special effects pushing the show to new standards again. Russell T. Davies and his creative team have drawn on many a science fiction film and TV show for this episode, for the look and feel of the piece but the biggest influence comes from 24, after giving the show a real time countdown. The Doctor also gets to be a little ‘Jack Bauer’, taking on the alien threat and even succumbing to its infection, but of course fighting it valiantly. 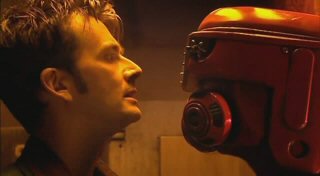 David Tennant continues to grow as the Doctor and is quickly becoming one of the best actors to ever grace the role. This again shows he can cope with action but his running technique still needs a little work. You can run on Converse All-Stars, Will Smith proved that in I, Robot, but David always looks a little strange or even slightly camp.

‘42’ might not be the most original Doctor Who episode you will ever see, as it steals from so many science fiction conventions that have come before, but it is an entertaining one. Whovians will also get a kick out of the subplot involving Martha’s mother, as the set up for the season finale continues.