Since the series returned in 2005, one writer has become synonymous with providing genuine scares to the Whovian and he is Steven Moffat. Better known for writing more light-hearted, comedy shows such as hit series ‘Press Gang’ and ‘Coupling’, Moffat has now turned his considerable talents in a much darker direction. After bringing us the terrifying and very original episodes ‘The Girl in the Fireplace’ and the two-part classic ‘The Doctor Dances/The Empty Child’, his latest episode is his best yet and one that will have you cowering behind the couch.

For the second time since the series returned, the Doctor is not the star of the show but unlike ‘Love and Monsters,’ this is a show were the Timelord isn’t sadly missed. Seen through the eyes of Sally Sparrow, we discover that her life is in danger and only messages from the past can save her.

This plot device only works because of the quality of the writing and the performance of Carey Mulligan as Sally Sparrow (a possible future companion?), making the lack of the Doctor and Martha for most of the story not a big problem. 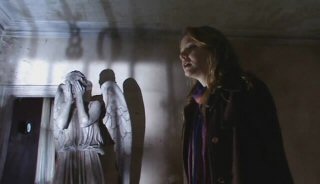 What makes the episode so memorable are the Weeping Angels. You would never have thought that statues could be so petrifying. These ancient creatures from the start of the universe (there seems to be a lot of these) can only move when you are not looking at them, so you cannot even blink when looking at them. If they touch you, you are sent back in time and they feed on the potential life force that you had remaining. This might not sound terrifying but you will be hiding your eyes every time the Angels appear.

‘Blink’ is one of the best standalone episodes of ‘Doctor Who’ since the series returned, if not the best. With some genuine scares throughout and an excellent performance from Carey Mulligan as Sally Sparrow, this only goes to prove again that that a Steven Moffat episode is the highlight of a season.