Series 9 continues our tour of the classic series in general and the Tom Baker era in specific with a season 16/17 smorgasbord. Those two seasons were the “comedy” era, in which Douglas Adams first wrote for and then script-edited the show. It produced such classics as “The Pirate Planet,” in which a bombastic space captain with a cybernetic “eyepatch” flew around the galaxy raiding other planets and draining the life out of them, and frequently (“The Ribos Operation,” “The Androids of Tara,” “The Creature from the Pit”) featured aliens and alien cultures that seemed to take their cues in look and feel from past Earth cultures (mainly medieval and Renaissance Europe) while mixing in advanced technology and knowledge of space travel. In one story, “The Horns of Nimon,” the invading aliens present themselves as powerful gods who demand tribute from the weaker cultures they’re dominating. The two seasons are praised for their sense of humor and entertainment value, but have sometimes been regarded as slightly embarrassing by fans for bringing in a lower-budget slapstick feel that’s harder to take seriously. 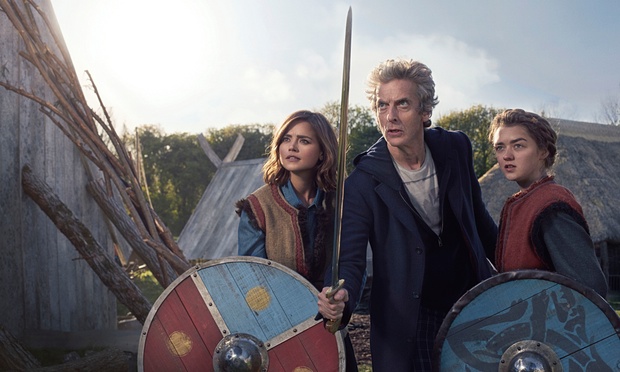 So if the Vikings seem a little goofy, if the wigs fit a little poorly, if the fire-in-the-water gambit seems a bit ridiculous, maybe it’s because this story is deliberately harking back to the (really rather enjoyable) stretch of Doctor Who history from 1978-1980 when this sort of thing was business as usual. Or maybe it’s just that the presence of Maisie Williams, and indeed the production values up to this point, lead us to expect something that looks as good as Game of Thrones or even Vikings, and we have to remind ourselves that this is Doctor Who. Where, apparently, anyone who lived before maybe 1400 or so is kind of incompetent to live in their actual time and place and is moreover kind of an idiot. I mean, maybe? I’m not super well read about history. It could very well be that in a typical Viking village, at least half of them would not only have never even tried to pick up a sword back in their day, but actually be prone to fainting at the sight of blood.

No matter. Like those comedy Baker episodes of old, this isn’t really a story about the Vikings. It’s not about historical accuracy. It’s about different ways of fighting. It’s about what you do if you’re being threatened by a bully and you’re not really that good at physical combat, but you’re good at other things. Say, for example, you’re bad with a sword but you’re good with a wood knife and you can carve a beautiful dragon totem. Or maybe your footwork sucks but you can throw a ring over a peg with the best of them. Maybe you’re brave enough to declare war on the biggest bully around, but the only thing you can do to stand up to him is to tell a story that will embarrass him so badly he never attacks you again.

It’s unusual for the Doctor, who is the poster alien for “Fight Different,” to be the one locked into the idea that the Vikings must fight (and die) or flee (and live). It’s slightly tiresome for Clara always to have to remind him of what he’s been doing for around 2000 years, but it’s possible that losing companions or seeing them permanently changed by their adventures with him has taken its toll over time and he’s gotten gunshy about encouraging people to put themselves in danger. This makes room for Clara and Ashildr to demonstrate the alternative fighting skills which may have been the strength that got them teleported to the Mire ship along with the testosterone-filled Viking warriors (or maybe it was just that they were carrying the Doctor’s broken sonic sunglasses). Clara’s is, apparently, talking villains into running away, while Ashildr’s is — along with issuing ill-advised but courageous challenges — telling stories. 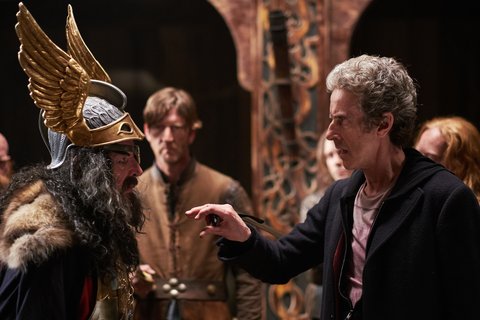 The episode is a bit heavy-handed with this, spelling the themes out rather than letting us read them for ourselves, so we’re told flat-out that it’s her stories that have saved the day, tricking the Mire into retreating from an illusory foe and, thanks to Clara’s iPhone video, leading to a true story that will damage their reputation beyond repair. The stories people tell to and about you, says “The Girl Who Died,” are more powerful weapons than any sword or gun in your hand.

All of this is generally worthwhile and, to some extent, true, and it distracts us from the ending we know has to come, because it’s right there in the title. It’s dismaying nonetheless when we see that the girl has actually died, partly because Williams has so successfully and immediately made us believe in Ashildr, a character who is like Arya Stark in a few ways yet unlike her in many more. What the Doctor does next does come as a surprise, partly because if it was mentioned earlier in the episode I missed it, and partly because he quickly and casually creates yet another pseudo-immortal not-quite-Time-Lord (joining Jenny and River) with just a bit of nanotech. It’s strange but not unwelcome, paying off in a reasonably satisfying and surprisingly early way the questions raised in “Deep Breath” and “The Witch’s Familiar.” I’m looking forward to seeing where this new character goes.