The Sontarans return to the Doctor Who universe to cause havoc on Earth. First appearing back in 1973 in the serial ‘The Time Warrior,’ the Sontarans made further appearances in ‘The Sontaran Experiment,’ ‘The Invasion of Time’ and their last original series show, ‘The Two Doctors’ back in 1985.

Now Russell T. Davies gives the strangely fearsome warriors a much-heralded return in the first two-parter of the new season. They are a warrior race of clones, formidable opponents, never surrendering and invading without remorse but as a few characters comment, they are short on stature and potato-like in appearance. 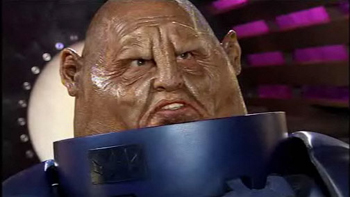 Taking place back on Earth, the two shows also see the return of UNIT (Unified Intelligence Taskforce) for its first team up with the Doctor since the restart of this classic series. Sadly, the Brigadier does not return, though a line of dialogue does allow for a future possibility.

This is all down to UNIT’s latest recruit, acknowledged in Torchwood, Martha Jones. This means a welcome return for Freema Agyeman. After being replaced by Donna Noble (Catherine Tate) at the end of the last season, Martha has gone on to guest in Torchwood, on which she will return next season as a regular. However, she has been sadly missed from the original show.

As a newly qualified doctor and officer for UNIT, Martha is in charge of the investigation into the worldwide biggest selling piece of technology ATMOS. Sure that it is alien technology, Martha rings the Doctor and asks him for a second opinion.

As with most Doctor Who two-parters, this is action-packed and works in the same way as the reintroduction of the ‘Cybermen’ two seasons ago by going for all action mixed with a bit of investigation. ‘The Sontaran Stratagem’ introduces the investigation properties of the adventure, as we discover what ATMOS is, its inventor Luke Rattigan’s (Ryan Sampson) involvement and the Sontaran’s master plan. The second episode ‘The Poison Sky’, is all out action as the Sontarans reveal their plan for Earth and the fight begins. But of course, the Doctor won’t let it happen. 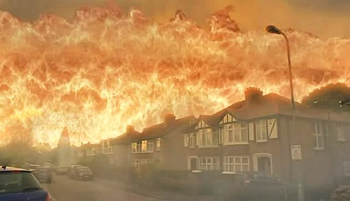 Mixed in with the action may be a few drops of social commentary, as ATMOS definitely relates to global warming — the second episode title might be a hint — though you might call it more of a soup kitchen than greenhouse effect. On-line, some have wondered if the reference to disappearing bees ties in to the overall season arc (and the musing does return later), but that, too, is a real-world occurrence spilling into our Doctor Who goodness.

With good performances from Catherine Tate as Donna, the always excellent Bernard Cribbins as Wilfred Mott and Christopher Ryan as General Staal, this is another fine two parter from Russell T. Davies and his creative team.

(Editor’s side-note: Why do so many alien races want to use Earth as a nursery? That’s more perplexing than the disappearing bees…)