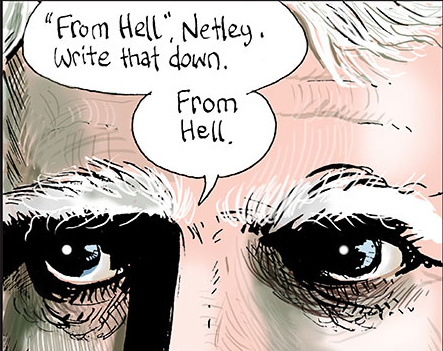 If you still have friends who think comics aren’t literature, one of the best counterarguments is Alan Moore and Eddie Campbell’s From Hell. The thorough dissection of not just the Jack the Ripper mystery but also Victorian London stands as a must-read for any serious comic book fan. Because it’s Moore, there’s also a healthy dose of mysticism and philosophy. It may not be as popular as Moore’s other classics like V For Vendetta and Watchmen, but it’s further along on his evolution as a writer, mystic, and mind-blower. Campbell’s art also captures that eerie feeling, at times grotesque and cartoony, but always evocative.

Previously collected in what we called a “telephone book” (it’s massive), From Hell will return in September in a new form. It’s still the same disturbingly great graphic novel (once more divided up into more digestible and liftable 10 parts), but now it’s in color. Or rather, as artist Campbell considers it, colorized. Campbell himself is doing the work, and somehow I have the feeling it will enhance the sense of dread and wonder that their original work provided.

Top Shelf Comix will release the first issue in September. Though they say it’s available only to comics shops and digitally, considering that Amazon owns Comixology, that doesn’t seem quite as cool a thing as it should. But From Hell is one of those pieces that should be savored on paper — maybe we’re old-fashioned, but this is Victorian England we’re talking about. Contact your local shop and let them know you want this.

For decades, the award-winning graphic novel FROM HELL has welcomed readers into the grandeur and grime of London in the late 1800s. The New York Times-bestselling opus is an achievement the New Yorker dubs “remarkable” and Entertainment Weekly calls “an immense, majestic work about the Jack the Ripper murders, the dark Victorian world they happened in, and the birth of the 20th century.”

Beginning in September, readers old and new will experience FROM HELL as never before. The FROM HELL Master Edition presents Alan Moore and Eddie Campbell’s Victorian masterpiece as a ten-issue serial, thoroughly restored and revised “for color, clarity, and continuity” by Eddie Campbell himself.

“The most dramatic change is the color, of course,” says Campbell. “I prefer the term ‘colorizing’ to ‘coloring’ since I’m not simply painting within the black lines, but reconceiving every panel to suit a full-color world. But I’ve also gone through and fixed small errors and minor flaws that have haunted me for decades. Ultimately the result is my equivalent of a ‘director’s cut’ of From Hell.”

“From Hell is one of the greatest graphic novels ever made — the first comic I ever read that really opened my eyes to the possibilities of sophisticated writing and art in this format,” says Chris Staros, Editor-in-Chief of Top Shelf Productions. “It’s been one of the keystones of Top Shelf’s line for almost twenty years, and now it’s an honor to watch Eddie breathe a whole new life into this epic.”

Eddie Campbell discusses his process in greater depth and reveals an exclusive interior preview of From Hell: Master Edition in a new interview at Entertainment Weekly.

From Hell: Master Edition #1 (of 10) will be released exclusively through comic shops and digital retailers in September 2018. To find a comic shop near you, visit comicshoplocator.com or call 1-800-COMIC-BOOK. 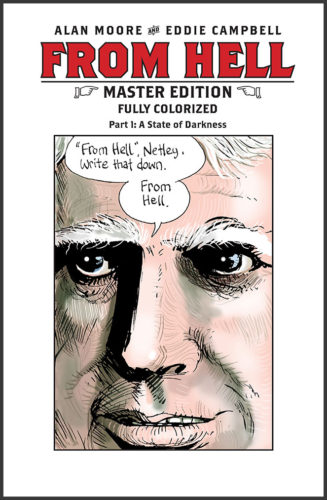