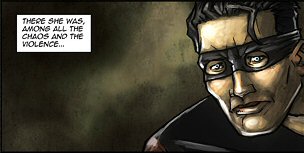 In June, new publisher Catastrophic Comics releases the first issue of their first title, the superhero noir book Sparks. Yes, it’s edited by myself (full disclosure) but I only wish I could say I had something to do with how brilliant the art is. Sparks’ writer Chris Folino, himself a fan of the book’s artist, JM Ringuet, shot a few questions over to Ringuet’s home in China.

Chris Folino: How did you start off in comic books?

JM Ringuet: I’ve always been interested in doing comics since I was a kid. I remember doing my own folded (but not stapled) comic when I was about 7;  it starred a superhero with a mask that resembled the Phantom with a cape and who had a dog as a sidekick. Unfortunately, despite many tries, I didn’t start for real in the industry until very recently, first with coloring and then full art.

Chris Folino: How did you get involved with Sparks? And what was your reaction when you started the book?

JM Ringuet: By chance I think and with the help of Derek McCaw. I was really excited to have a chance to do full art for a story (And be paid for it) and a bit scared by the task, because it definitely is not easy.

Chris Folino: Tell us about the world of Sparks? You’ve set a tone and a mood that’s very unique. And the characters…how did you come up with the design?

JM Ringuet: Sparks is a noir story, set in an unnamed city (which has both European and American features), probably in 1948, but it could be an imaginary 1948. It’s Phillip Marlowe mixed with Watchmen, the Spirit and maybe a bit of Sin City. The tone of the world came out very organically from talking to you and reading the script. 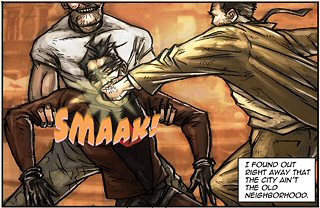 The characters were not easy to design, we had a lot of back and forth on that, until (everybody) was very satisfied. My first version of the hero, Ian Sparks, was based on Orson Welles, because I thought it would be different, but we moved away from this. I want to add that one character is ‘played’ by (Catastrophic owner) William Katt (as much as I can draw his likeness) and will appear in Issue #3.

Chris Folino: How long does it take you to draw a page, ink it, color it and do lettering?

JM Ringuet: Anywhere between 8 to 20 hours, depending on the amount of details. Lettering takes maybe an hour or more for one page, because there are a lot of tries before I get something I like.

Chris Folino: Who’s your favorite character to draw in the story?

Chris Folino: Were you concerned Sparks was too dark?

JM Ringuet: Not really. There is always darker, and dark is something people like in modern comics, I think. It’s not dark just to be dark, the concept demands it. I quite like dark stories in general. I’m a big fan of James Ellroy.

Chris Folino: You are French and live in China? Is there any problem get art supplies there compared to artists elsewhere or does it matter?

JM Ringuet: Well my art supplies are H and HB cheap pencils (from Muji), a Pentel eraser, and my computer (which is an American made Alienware, until I switch to Mac), so it’s not hard to find in China. It’s not difficult to find art supplies in China in general, except if it’s esoteric stuff, and it’s very cheap (including oil paint or watercolor from Windsor and Newton for example). I draw on photocopy paper and I ink everything in Photoshop CS3.

Chris Folino: What artists have influenced you and which one did you look at when you created the world of Sparks and the characters?

Chris Folino: How is your working relationship compared to other books you’re doing?

JM Ringuet: Very straightforward and trustful. So far all of my relationships with writers have been very good and painless so I guess I’m lucky. You know what you want but you gives me a lot of freedom on how I can improve (as much as I can) on your vision.

Chris Folino: How hard is it to draw, ink, color and do the captions for each page? Do you enjoy that or would you prefer to do only one or two things?

JM Ringuet: Lettering is not as fun because I’m not a letterer and not very good at it, I think. I just love to be able to do everything though, and be responsible for the whole art thing. If I fail, it’s my failure and I can’t blame anybody.

Chris Folino: Have you snuck anything into Sparks that’s an inside private joke for you and your friends?

JM Ringuet: No, I don’t really do that, so I didn’t even think about it. I tried to put elements in certain panels that enhance the story (like some numbers that have a meaning in numerology, or symbols) but it’s just regular comic book stuff, trying to add layers and create resonance.

Chris Folino: What’s the experience been like working on Sparks compared to other books?

JM Ringuet: Great experience, but like I said I can’t really complain about any project I’ve worked on, so everything’s fine.

Chris Folino: What’s the appeal of Sparks for you?

JM Ringuet: Creating that noir mood and doing a full superhero book, something I haven’t done before.

Chris Folino: Why should readers pick up Sparks?

JM Ringuet: It is a great story with a dark heart, and it doesn’t look like anything on the shelves right now. It’s complex, very adult, smart and rewarding.