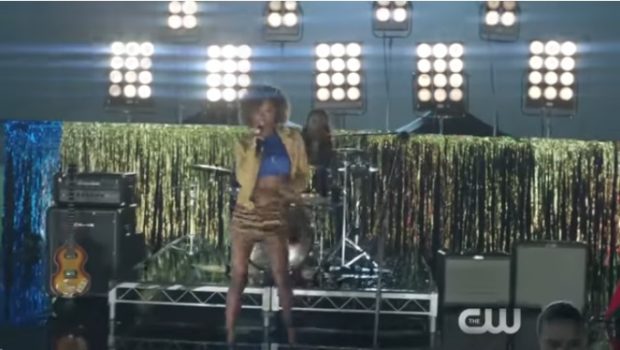 Last week saw the debut of Riverdale, the CW-ized YA drama version of the characters from Archie Comics. Somewhere between the revamped Archie and Afterlife with Archie, the show is… better than you might think, and much better than Back To Riverdale, the early 90s attempt to do a live-action Archie show, but set 20 years after they’d graduated from high school. And you know who I think is really going to break out? Cole Sprouse as Jughead.

But this week, it’s Josie and the Pussycats, actually doing a cover of “Candy Girl (Sugar Sugar)” by Inner Circle featuring Flo Rida. Just want to set the record straight and admit that I would have had no idea that was the case without the below press release.

Featuring lead vocals by series star Ashleigh Murray (Josie), the recording is a cover of the 2009 single “Candy Girl (Sugar Sugar)” by Inner Circle featuring Flo Rida, which was itself inspired by the iconic hit 1969 song “Sugar, Sugar.”

Executive producer Roberto Aguirre-Sacasa said: “The hit song ‘Sugar, Sugar’ has always been a huge part of Archie’s history, so we knew we had to include it in Riverdale in some way. Since Archie’s just starting his musical journey when we meet him, we thought it would be a fun reinvention to have Josie and the Pussycats perform an updated version of ‘Sugar, Sugar’ — with an assist from Riverdale High’s cheerleaders and resident mean girl Cheryl Blossom.”

Series star Ashleigh Murray said: “As if stepping into the shoes of a fiery icon like Josie wasn’t enough, I was gifted the opportunity to reimagine and rock out on the classic ‘Sugar, Sugar.’ And boy, was it sweet.”