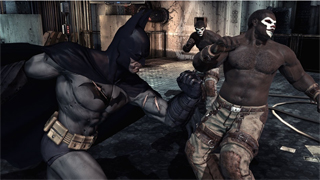 Years ago, we had a chance to meet Kevin Conroy for the direct to video Mystery of the Batwoman. At the time, he owned Batman, no question. Nobody could imagine anybody else providing the voice of the Dark Knight and, well, in the years since, though many have tried, fans still have trouble imagining it.

So when Eidos announced that Conroy and Mark Hamill would be voicing Batman and the Joker for Batman: Arkham Asylum, the reaction was, “…but of course. You want this game to be goooood.” And so it is.

At Comic-Con, we got to sit down at a roundtable event with Conroy, a gracious man, Juilliard-trained actor and a great conversationalist. 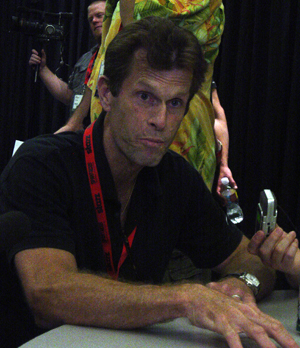 Question: You’ve been voicing Batman for a long time now. How was it reuniting with Mark Hamill, and was it hard getting back into the role?

Kevin Conroy: Well, I never got out of the role. I’ve been doing it since ’91, so that’s eighteen years. And the great thing about working with the same people for so long is that when you do get together there’s sort of a short-hand you all know about each other. Mark and I have been working literally for eighteen years. So we know how we all work, and there’s no sort of ‘getting to know you’ period. We can just jump right in.

A friend of mine came to watch a recording once … a session, and was so amazed at how … He said, ‘I didn’t even know what they were asking you to change. I was still trying to figure out what they were trying to get you to change. And you made the adjustment and change that they recorded and they had moved on to the next note. He said, ‘You all have such a short-hand for understanding each other.’ And that just comes with years of working together. So working with the same people is a great advantage for that reason.

And also Andrea Romano … She didn’t do this project, but she was the casting director on most of the Batman projects, and she put together really good actors. She has a great feel for people that aren’t just talented but who work well together. Who are respectful of each other, who come prepared … who come on time. (laughs) You’d be amazed at how unprofessional some people can be. 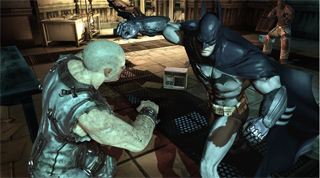 So it’s a very good group of people, and coming back together … We really never really left, even if it’s a year or two between games, or films, or something. That’s not much time really, in terms of Hollywood.

Question: Do you follow what goes on with Batman now? I mean, comic book-wise, what did you think of The Dark Knight? Do you have a connection with the character now that you like to keep up with what’s going on in his life?

Kevin Conroy: To be honest, I don’t really … I have my own relationship with the character, and I don’t really … I do watch what other people do with it, but I try not to have it influence me too much and with my take on it. But yeah, sure, I go to watch the live-action films that they do.

Kevin Conroy: I loved Heath Ledger’s performance. He was phenomenal as the Joker. And Christian Bale I felt was fantastic in his first Batman film that he did, he was fantastic. Something happened with his voice in the second one he did. He’s obviously a very talented actor, he knows what he’s doing. Everyone criticized that about the film, and I think that was a fair criticism. I don’t know what that was about. But the Heath Ledger performance was fantastic. Fantastic!

Question: Let’s have a Joker-off: Mark or Heath?

Kevin Conroy: Well, no, I mean, you can’t compare, because they’re both wonderful in different ways. Heath Ledger was fantastic, but Mark Hamill, if you’ve ever been in a recording studio with him and watch what he does, I mean, he practically devours the microphone. He really transforms. 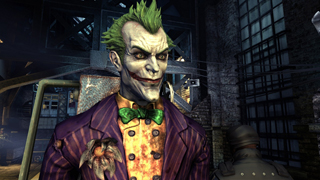 And before Mark, a lot of people don’t realize, the first three or four episodes of the original show was Tim Curry, who was also fantastic. He was fantastic, but in a different way. He was Joker … scary, scary funny, and Mark is Joker crazy funny, and a little scary, you know. But Tim was terrifying funny, you know. He was so dark, that they thought kids wouldn’t sleep at night after seeing that. But he was fantastic. So, you know, everyone brings different things to the role, to the different roles, and that doesn’t mean that one’s better than the other. Better is a qualitative judgment that people outside of the industry like to put on people inside the industry. And it’s not really fair.

Question: What did you think of the game’s story when you first read the script?

Kevin Conroy: I thought it was a great idea. I was surprised that actually no one had ever come up with it for a storyline for the show.

Question: Can you break it down for us?

Kevin Conroy: Well, it’s essentially that the Joker is put in Arkham Asylum … finally, and virtually every other major villain from the show has at this point been captured. Batman has cleaned up Gotham City. Joker takes over Arkham, and he has every major lunatic from the city in there with him. I mean, think of what they can do. It’s a great story idea. And as we were recording I thought, ‘Why did we never do this on the show?’ This is sort of a natural idea, you know. Arkham is where they all get sent, and what if they all get sent there at the same time and Joker masterminds a mutiny?

So yeah, I thought it was a great idea for a story; I was surprised no one had thought of it years ago, to tell you the truth. But Paul just told me he had another great idea. (laughs) So there’s another one! But how does Paul come up with these ideas? It’s been eighteen years! Just keeping the voice fresh over all those times is hard, but to come up with fresh ideas? I’m in awe with these guys’ creativity. That’s actually why the original series went off the air, originally. Because the audience loved it, the numbers were as strong as they had ever been, the network wanted it renewed, the studio wanted it. Everyone wanted it. Tim and Bruce and Paul were totally wrung out after so many years of coming up with stories. They said, ‘We really can’t do this anymore.’ They just wanted to move on to something else. So it was totally by choice, and it was because they had been cranking out so many episodes for so many years.

Question: You described Batman as Hamlet, which I never thought of until I heard you say it. After eighteen years, you’re voicing him for a videogame, it’s been your signature role; are there moments you just kind of go “…this ain’t Shakespeare?”

Kevin Conroy: That’s so funny you should say that, because I just recently connected with … You know, I trained at Julliard, and I went when I was seventeen. I left high school early. So I was the youngest one there. Robin Williams was my roommate; he was six years older than me. Everyone was so much older than me. I was the kid in Julliard. So I just recently connected with some of my old classmates in New York, and one of them is an actor named Casey Biggs, who you might know from Star Trek. One of the Star Trek incarnations, Casey was on it. 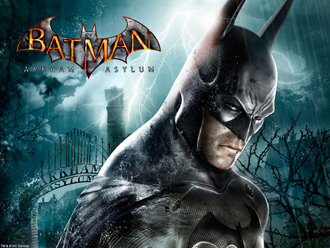 He said, ‘How’re you doing? You’re Batman, that’s so cool!’ And I said, ‘Yeah, but Casey, I mean four years of training at Julliard, that’s not exactly what I went through training for.’ And he said, ‘Hey … Neither was Star Trek. If it’s a great job, you know. And it’s all entertainment.’ And it’s true, it is all entertainment. You know, you do what you do. I do theater occasionally to replenish my juices, and then I do this stuff. I’ve really grown in my appreciation for it as I’ve done it over time. I really wasn’t that aware … This was the first animated show I ever auditioned for. The first animated character I’ve ever played. Talk about a lucky break, I mean, unbelievable. It’s like hitting a home run your first time up at bat. So I had to develop a lot of knowledge and appreciation for it, and I did over time. I realized it’s beautifully written, it’s beautifully drawn, it’s very complex … It’s got a great history. The cartoon going back to the Bob Kane and The Dark Knight series and everything.

So I respect it, and I respect being a part of it. It’s all entertainment, and you go back to where theater came from. You know, the morality plays and stuff, they were all about entertaining people with teaching stories through entertainment. It has to be entertaining or it won’t sell. That’s what my first agent used to say, ‘It’s called show-business.’ And the business part of it’s just as important as the show part of it. It’s gotta sell or it’s not art.

And many are arguing that Batman: Arkham Asylum IS art. No small part of that is thanks to Conroy, and we’re grateful for the chance to have sat down with him.