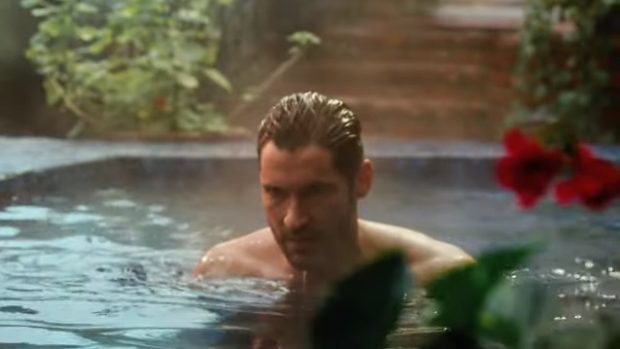 We know where our bread is buttered. If you’re a fan of Lucifer, cancelled by Fox last year and resurrected by Netflix, you already know that May 8 will be the premiere date of the new streaming season. But maybe you didn’t see the ridiculously sexy video of star Tom Ellis as Lucifer, designed to get fans hot and bothered. If Marvel is going to advertise an Invisible Woman series with a Greg Land cover, then this is only fair. Thus, here it is. Don’t say we didn’t warn you.

Reeling from the aftermath of Chloe seeing his devil face, Lucifer faces a new challenge: Eve, the original sinner herself, is back. Does she want revenge for when he tempted her out of Eden oh so many years ago… or something else entirely? Lucifer Season 4 premieres May 8 only on Netflix.

How long will Lucifer stay on Netflix with the upcoming Streaming Wars? Though the DC Universe streaming service has been pulling in all things loosely DC, including Constantine, this show about a barely penitent devil comes from their Vertigo imprint, so Warner Bros. might be happy to let it continue elsewhere. He’s not a superhero, and the faithful followers of this show might not be as interested in something more comics oriented anyway. This show is about temptation and pulchritude.