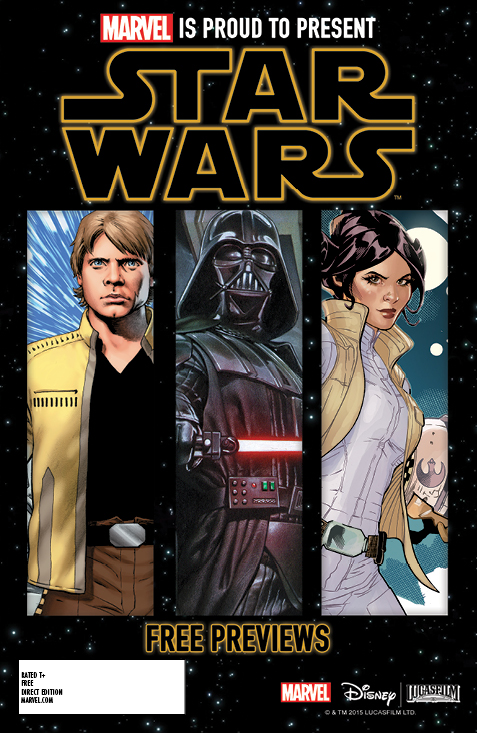 As much as I feel a tiny bit Force-glutted right now — and if 11-year-old me saw that I typed those words, he would be ashamed — the truth of the matter for Marvel’s Star Wars comics is that they’ve all been good. So a free sampler getting new readers interested is a mixed blessing. First, Marvel is showing great support for retailers, and second, it’s not like it’s All-Star Batman and Robin. On the other hand, you’re going to find yourself wanting to buy some books that maybe you didn’t have on the list… because believe me, if you’re not reading them, you’re going to want to, at the very least Shattered Empire, because how else are you going to know about the parents of some Force Awakens characters?

I’ve said too much.

It was the year the Force returned to Marvel, and we’re closing out 2015 with a bang. Today, Marvel is pleased to announce the Star Wars Sampler, previewing Marvel’s blockbuster Star Wars line of comics! Perfect for distribution at movie theaters and other promotional events, this special one-shot provides all the information anyone needs to dive in to the ongoing adventures of Luke, Han, Leia, Darth Vader and more!

Hitting retailers on December 9th, celebrate the upcoming release of STAR WARS: THE FORCE AWAKENS with this 56-page sampler chock full of comic previews. Featuring previews of Star Wars #1, Darth Vader #1, Princess Leia #1, Lando #1, Vader Down #1 and Journey to Star Wars: The Force Awakens – Shattered Empire #1, now is the perfect time to get a taste of these chart-topping series and collections.

The record breaking Star Wars #1 sold over 1 million copies and returned for 8 additional printings. This sampler will help retailers get these critically-acclaimed comics into the hands of the next million fans! Retailers are encouraged to check the Marvel Mailer for additional ordering information. Look for the STAR WARS SAMPLER at your local comic shop beginning December 9th!