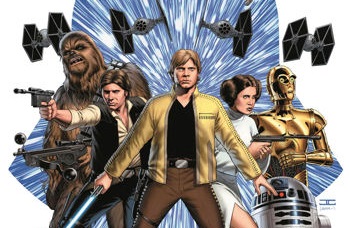 Marvel wanted to do that, too. Though this first issue flirts with darkness, it’s also clearly intended to toe a family friendly line and feel… well, like it felt to watch A New Hope when it really was just Star Wars.

Writer Jason Aaron nails it, capturing the key elements of every character and translating to comics. You can hear Harrison Ford’s tones shifting as Han Solo tries to pull off a con. C-3PO over-narrates in dialogue that is far more clever than the original movie allowed him, and yet perfectly C-3PO. Still new to The Force, Luke Skywalker tries to let it flow. He also tries mimicking everything he saw Obi-Wan Kenobi do, with mixed results. And Leia? Leia doesn’t quite know what to make of her new companions, nor how she exactly she feels about them. But she does kick ass.

This isn’t the more psychological approach that Dark Horse took with its series launched a couple of years ago that covered the same time period. That was full of reflection and emphasized the character’s internal struggles. It was good; it was interesting. But it wasn’t what the casual fan considers Star Wars. 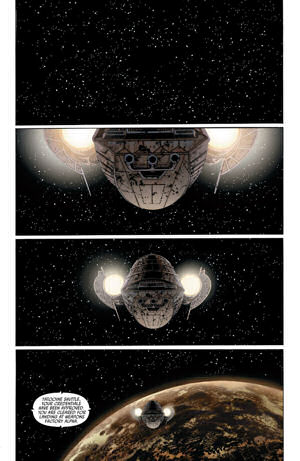 Marvel’s Star Wars very much feels like an episode falling between A New Hope and The Empire Strikes Back that feels like a movie serial. It opens like the movies, with a scrolling explanation and, of course, a ship moving slowly into our vision from above. We’re plunged into a set piece that also, through the interaction, gets us up to speed as to where the characters had been and lightly foreshadows where they will be.

That’s not to say it doesn’t tackle a serious dark side (no pun intended) to the Empire, and definitely with more weight than any of the movies actually did. Aaron’s plotting shifts us toward it, allowing for as much a shock to the reader as Luke, who of course does the right thing.

Would it work without John Cassaday on art? Possibly, but his cinematic skill really brings it to life. Not every panel quite feels like we’re seeing the actual actors, but Cassaday himself is an actor with his pencils and inks. The character’s faces sell it, and more often than not, yes, Ford is young again with that half-smile, and Luke Skywalker is Mark Hamill. And once more, Carrie Fisher is an action hero, actually more than she was truly allowed to be in the original trilogy.

If Aaron and Cassaday can keep this up, it’s a far worthier Episode 4.5 than Splinter of the Mind’s Eye. More importantly, it’s a book that just might hold on to its staggeringly high sales figures. Maybe not a million a month, but it should stay at the top.

Because these are the iconic characters that changed a generation and continue sparking the imaginations of new generations. And so far, Marvel is doing them right.