Before the plans for Star Wars: Galaxy’s Edge really coalesced, I had several Disney fans insisting to me that Toontown was going to be torn down in Disneyland to make room for it. You may have noticed that though the Rivers of America altered their course, Toon Town still stands tall. Or short. And how’s this for a vote of confidence in that oft-overlooked area of the park? Disney officially announced this morning that Mickey and Minnie’s Runaway Railroad attraction will be opening there in 2022.

A mixture of traditional ride mechanics and cutting-edge visual technology, the attraction was first announced to open in Disney’s Hollywood Studios in Spring of 2020. It still will — it’s just exciting for West Coasters to know we’ll be getting it, too, in an area of the park that needs a little sprucing up. Because it’s tucked away neatly behind It’s a Small World, Toon Town can get overlooked, despite having one of the best rides currently in Disneyland — Roger Rabbit’s Car Toon Spin. But mostly — Toon Town has a lot to look at surrounding a lot of concrete. 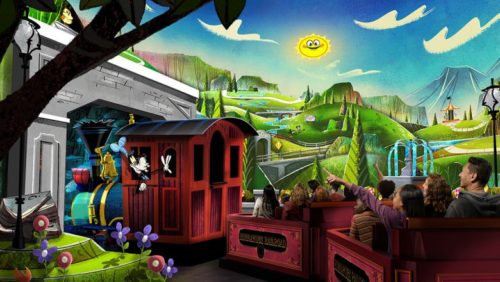 This should liven it up. According to Disney Parks Blog,

This first major Mickey-themed ride-through attraction at Disneyland park will put you inside the wacky and unpredictable world of a Mickey Mouse cartoon short where anything can happen! Once you step into the cartoon world of Mickey and Minnie, you’ll board a train with Goofy as the engineer. Then, one magical moment after the next leads you to a zany, out-of-control adventure filled with surprising twists and turns.

Toon Town is here to stay, and it’s only getting better. And also, no, Disney is not moving Star Tours to Battu. You’re still going to have to walk from Tomorrowland to Galaxy’s Edge. Though maybe you could take the train…