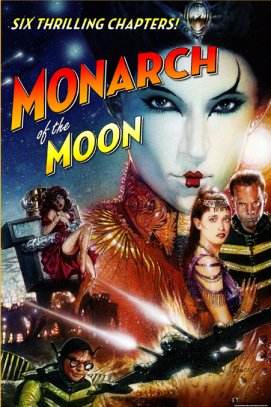 Shortly before the end of World War II, the U.S. Government commissioned Lt. Alaster Galloway to film his dream project. A six-part serial that combined the pedantry of recruitment propaganda with the thrills of Flash Gordon, Monarch of the Moon could be considered one of the greatest “lost” films of history. Until now. Film historian and preservationist Travis Liberty stumbled across what may be the only existing copy of the movie serial in a Mosfilm warehouse, the first time anyone had seen it in almost fifty-five years. He took his find to Mike Richardson at Dark Horse Productions, and the rest is history.

At least, Liberty hopes it will be. Last Friday night at WonderCon, he held a press conference at Things From Another World, Dark Horse’s San Francisco comics and collectibles shop, to announce that finally, Monarch of the Moon is ready to be seen, making its premiere at the New York Comic-Con next week.

Barely able to contain his excitement, Liberty sat next to a controlled Chris Tongue, Creative Executive for Dark Horse Productions and the newly formed Dark Horse Indie, who made sure the eager film fan didn’t reveal too much. Despite a fabled history, Monarch of the Moon remains a mystery, one that Liberty walked the press through. 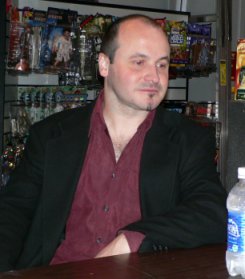 The loss of the film’s reels for so many years also involved the burial of a dark secret. According to Liberty in the press notes, “This project was plagued with disaster from day one. This is what happens when the government tries to mix politics with private industry”

With an almost manic glee, the historian gave reporters a rundown of the serial’s plot. An alien warlord from the moon had actually provoked World War II, arming the Axis forces with advanced weaponry. Only a plucky American superhero, the Yellowjacket, could stand against the fiendish lunar plot. In the process, of course, the Army hoped Yellowjacket would inspire unprecedented military enlistment. But the film never got a chance to shine.

Nor is it acknowledged by the U.S. government. Though the Army created a shell production company called American Liberty Pictures, the sordid fate of Monarch of the Moon spurred the erasure of everything about it from government archives. Not even the tax records remain. Was it the possibly record seventy-two extras dying on set? Liberty attributes that to “…lack of care in visual effects.”

In doing some research, Dark Horse president Richardson discovered that twenty extras died from third-degree burns from handling props. And therein lies the secret of the demise of both the film and its director.

After Army reconnaissance in Innsbruck, Germany, uncovered Nazi weapons that looked suspiciously like those designed for Monarch of the Moon, a bizarre plot was uncovered that could only happen in the movies. Except it happened to a movie.

The propmasters turned out to be undercover German engineers funneling their unheard of million dollar budget into weapons for their cause. Though probably ignorant of the plot, Galloway was executed for treason, so far the only film director in history to suffer this fate. 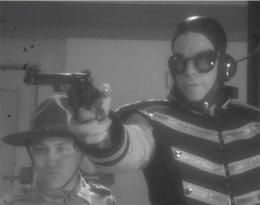 A still taken from the trailer

Though the U.S. Government ordered it destroyed, Monarch of the Moon must have been duplicated by the undercover agents and sent back to Berlin. When that city fell, Russian soldiers transported it to Moscow. According to Liberty, a black-and-white trailer surfaced some time in the seventies, confirming the existence of a film that had faded into legend. One reporter at the press conference also reminded Liberty and the tight-lipped Tongue that a few props and the jacket worn by the lead character, the Yellowjacket, had been auctioned off at Sotheby’s a few years ago.

Indeed, Dark Horse had a few props, likely gutted, in their booth at WonderCon.

As for the film itself, Liberty and a team of preservationists were given a blank check from Richardson to restore it to its unseen glory. They’ve spent the past eighteen months doing painstaking work; despite a black-and-white trailer, the film itself was shot in Technicolor. Improperly stored at Mosfilm, the original stock is in delicate condition. 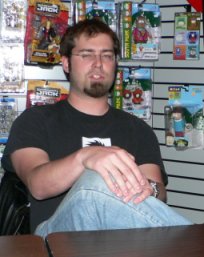 Monarch of the Moon may, in fact, still be incomplete, as Liberty suspects that they are missing a reel. By judicious editing, though, he believes that the approximately 97 minutes he has to screen in New York is a coherent narrative and lots of fun. In the press notes, Richardson enthuses, “You’ll love the spaceships.” To those of us sitting in the upscale comics shop, Liberty added, “Hirohito looks great in a Hypno-Helmet.”

Beyond New York, Liberty hopes for a limited theatrical release in the Summer of 2006, then home video courtesy of Dark Horse Indie, a collaboration between Dark Horse Productions and Image Entertainment, Inc. But more on that later.

For now, let us get excited about Monarch of the Moon, given its chance at last.