Andrea Romano knows how to pick ‘em. For Green Lantern: First Flight, Romano – arguably the best known casting/dialogue director on the animation scene for more than 25 years – has brought together a pair of voiceover novices in the lead roles, along with assorted veterans of feature film and primetime television, including an 82-year-old character actor whose screen appearances date back to Mighty Joe Young.

As usual, the mix works perfectly.

Green Lantern: First Flight is the fifth DC Universe animated original film in the ongoing series, and Romano has been the voice behind the voices in each successful instance. This particular production was a bi-coastal affair, starting with a New York recording in late June 2008 of Christopher Meloni (Law & Order: Special Victims Unit) and Victor Garber (Milk, Titanic) as hero Hal Jordan and villain Sinestro, respectively. Neither Meloni nor Garber had ever recorded for animation, nor had they worked together, and yet Romano had the two actors perform their lines opposite each other in the same studio – which added a new degree of difficulty for both director and actors.

Romano has been one of the driving forces in animation voiceovers for more than a quarter century, her credit list reading like the honor roll for the Saturday morning cartoon Hall of Fame. From dramatic (Batman: The Animated Series) to silly (Animaniacs), contemporary (The Boondocks) to timeless (Smurfs), Romano has set the standard for matching actor to character with absolute savvy. Along the way, she has become a household name to legions of animation fans.

The National Academy of Television Arts & Sciences has listed her name 20 times among their annual nominations, Romano taking home six of those Emmy Awards – and promptly attiring those statuettes in Barbie clothes. It’s a Romano tradition.

Somewhere between recordings for new DC Universe films and her weekly chores at the helm of sessions for Batman: The Brave and the Bold, SpongeBob SquarePants and The Boondocks, Romano found a few moments to discuss the casting and performances of the voices within Green Lantern: First Flight. Fortunately, she speaks very quickly … 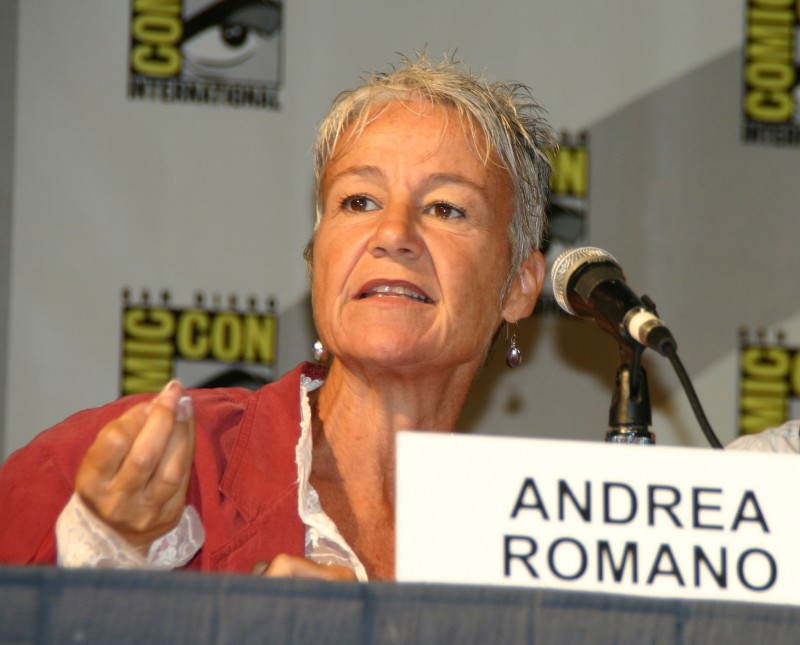 Gary Miereanu: Did Christopher Meloni’s rave reviews as a detective on Law & Order: SVU lead you to casting him as the ultimate space cop, Hal Jordan?

ANDREA ROMANO: Given the age range and the character type, and the fact that he is a very good actor, I thought Christopher Meloni would be the right voice. His voice has a nice strength and honesty to it, and his acting is really wonderful.

This is a role that requires the character to come off as very smart, but he also gets duped when he probably should’ve have seen it coming. That’s a tough tightrope to walk, but I found Christopher so incredibly believable. Every note in his acting was true, and real, and organic, and believable. He had not done much voiceover, if any, but he learned so fast that he sprang forth fully formed. He had it down. I don’t think he ever had a technical problem.

Gary Miereanu: From Broadway to primetime to major motion pictures like Titanic and Milk, Victor Garber has quite the resume. What made him right for Sinestro, and how did you talk him into doing his first voiceover for animation?

ANDREA ROMANO: I have known Victor Garber’s work since Godspell, and there have been several connections over the years. Carl Lumbly played J’onn J’onzz for us on Justice League while he was doing Alias with Victor Garber, and I tried many times to hire Victor to do an episode with Carl as a fun crossover – but he was never available. I had met Victor a few times and I met him again at Diedrich Bader’s surprise birthday party. We spoke about him coming to work for me again, and this time his schedule worked out.

Sinestro needed to be elegant. There are many, many different Green Lanterns – some females, some male, some alien, some looking more human. They’re all different. This particular Green Lantern – Sinestro – is a bad guy. But we, as audience members, are not supposed to know that he’s a bad guy in this particular film. So I needed someone who could seem egotistical and strong, but not tip us off that he’s got an ulterior motive all the way through the piece. Victor hit every note perfectly. There was a musicality to his delivery. You don’t even have to tell someone like Victor Garber to do that – he just naturally finds the vocal music and brings it to the character.

Gary Miereanu: Were you at all worried about casting two actors who had not done voiceovers for animation, and having them record together?

ANDREA ROMANO: You would have thought they had worked together for years and years. They play well together, and it was a dream for me. When you’re a casting director, you never really know how it’s going to work out until you’re in the room doing the gig. This was one of those instances where I thought, “I know what the heck I’m doing!” I actually cast exactly the two right actors – they were perfect for the roles. They knew exactly what they needed to do and they did it. And they had fun in the process. 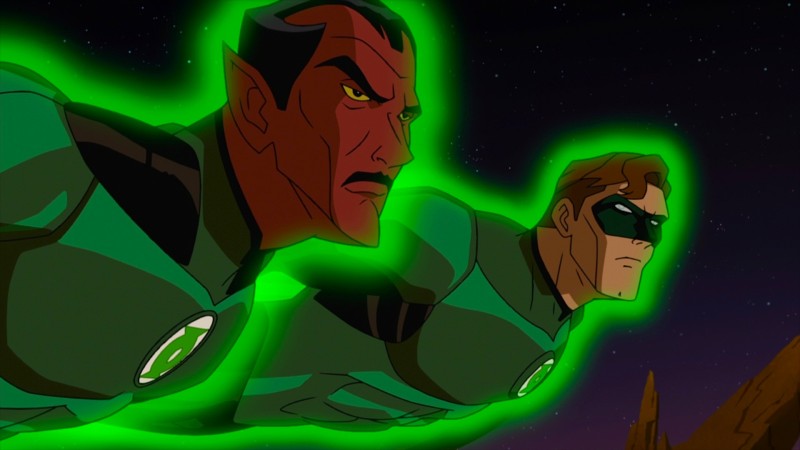 We struck this nice combination of Victor Garber playing this sort of duplicitous, sophisticated, elegant, eloquent guy and Christopher Meloni playing this kind of not necessarily blue collar, but much more down to earth, real guy that your everyman can relate to. Putting them together and having them play off each other was wonderful. Absolutely wonderful.

I sat in that recording session and smiled. They needed me fix and finesse a few things here and there, and explain certain bits of action. But as far as the acting beats, I didn’t have to tell them one thing. For the most part, I just got out of their way – because they knew exactly what they were doing.

Gary Miereanu: Michael Madsen is another voiceover novice, but that voice is made for character animation. What prompted you to cast him as Kilowog?

ANDREA ROMANO: Kilowog is an alien Green Lantern, and we really wanted a voice with texture and character and some edges to it; a voice that sounded gruff and big and strong, but also smart. I did not want someone who sounded like a big dopey guy. For years and years, I wanted to hire Michael Madsen and this was just the perfect marriage of role, actor and availability. It’s a lot about availability, and Michael is a great example. He hadn’t done any animated roles before Green Lantern, and yet when I finally got him in the room, we found out how much he had wanted to do it and, now, how much he loves doing voiceover work. He loves this whole world of animation, and characters like Batman and Superman.

You need an actor who has an enthusiasm for the project, for the role, and for the process – and Michael was there, in the moment, he understood, and wanted to do more takes than we needed. That is very generous and brought some really beautiful texture. I love those raspy, deep, dark voices – that sound that tells you that there’s been some life experience there, whether it’s been smoking cigarettes or drinking booze or just living. I don’t think I’m the only person that responds to that kind of voice with character. That’s a voice that’s lived. 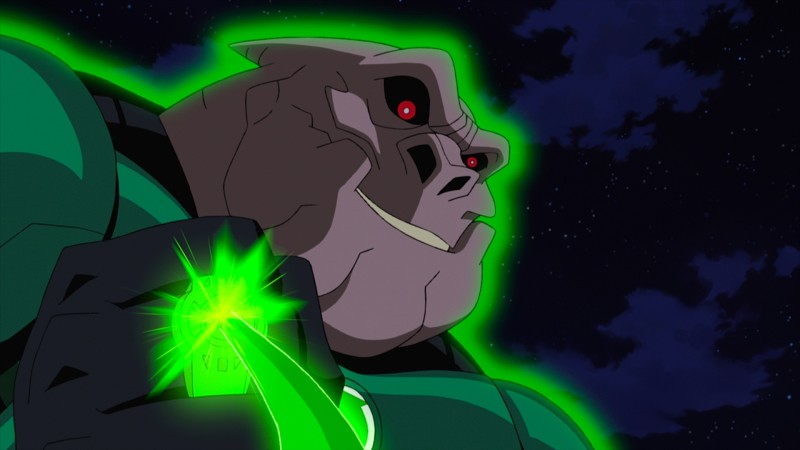 Gary Miereanu: You cast Virginia Madsen in Wonder Woman and her brother Michael Madsen in Green Lantern: First Flight. When was the last time you cast siblings in back-to-back projects?

ANDREA ROMANO: Never. Never ever. But that was so cool having both Madsens in consecutive films. Though not being able to hire siblings hasn’t been for a lack of trying. I was seated next to Tyne Daly once and we got to talking and I asked “Do you want to do voiceovers?” And she said, “I’d love to do it – my brother (Tim Daly) does it.” And I said, “I know, he’s my Superman!”

So I’ve tried for years to find the right role for her, but there are not that many significant roles for women. Wonder Woman was the only one that really had nice, big, beautiful parts for women. But I’ll find something for Tyne – I love her work.

Gary Miereanu: And how was the final member of your lead quartet, Tricia Helfer as Boodikka?

ANDREA ROMANO: We really needed Boodikka to be smart, sexy and strong. Tricia Helfer was interested and available and we were lucky to get her. She is such a very nice person, and such a good actress – especially for this kind of piece. She really understands it. She’s big in the Sci-Fi world, and she gets it.

She plays this character so that you never know what twists are coming. You think it’s very straightforward and then something happens and you’re surprised because she never tips it off ahead of time. She was spot on with her performance and I loved working with her. She was just a joy.