Forget the “online web mystery” that has made all the cyber-fanboys drool over the past couple of months. In A.I. there’s no murder to be solved, no deep examination of the perils of technology, and very little about the war between the mechas and the orgas that the internet has teased. Instead, the film tells a deceptively simple story about one mecha boy’s quest to become real. Cross The Velveteen Rabbit and Pinocchio with more than a little Blade Runner, and you would have some idea. That only makes sense, since the film production itself results from a blend of two masters of cinema with very little in common stylistically.

The film opens on a lecture from Professor Hobby (William Hurt), getting the audience up to speed on how robots, or mechas, function in this future society. Hobby’s corporation has created mechas that can feel and remember physical pain. They can perform any physical function. But they cannot yet love. Hobby intends to change that.

Enter The Swintons. In a society in which pregnancies must be licensed, they have lost their only legal child, Martin, to an unnamed disease. He lies in cold storage until such time as a cure can be found. To ease her pain, his mother Monica (Frances O’Connor) visits his capsule, reading books and playing music for him (in a nice Kubrickian touch, she plays selections from Tchaikovsky’s Sleeping Beauty). Her husband Henry (Sam Robards) works for Hobby, and thus becomes the perfect candidate for the scientist’s pet project.

Monica, you see, cannot heal over the loss of Martin, since someday he could return to her. Therefore, the best solution comes in the form of David (Haley Joel Osment). He will always be a child, but at least he will always be able to love her as a child loves his mother. Henry remains somewhat distant, but then, Martin’s condition hasn’t harmed Henry as much. Everything seems fine; they make a happy family. Until one day Martin is cured.

The two forced brothers do not get along. And with a mecha, sibling rivalry can be dangerous. Monica hits upon a desperate solution: take David into the woods with his supertoy bear Teddy (voiced by Jack Angel) and tell him to run. Abandoned by his mother, desperate for her love, David decides that, like Pinocchio, he must find the Blue Fairy to make him real. Only then will his mother love him in return. 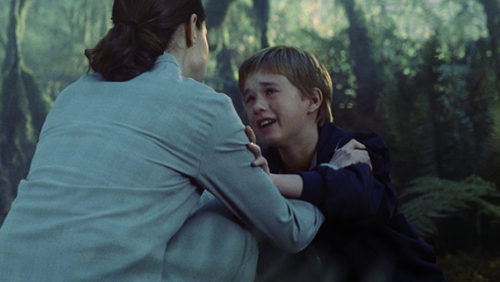 From here, A.I. takes a nice twisted turn. As in any good fairy tale, the woods are indeed deep, dark and dangerous. The cast-offs of mecha society hide in the woods, and Spielberg creates more than one nightmarish refugee. All of them get rounded up by an evil emcee (Brendan Gleeson) who runs the ironically named Flesh Fair: A Celebration of Life. In the Flesh Fair, mechas get tortured, maimed, and destroyed in order to sate a crowd fearful of being replaced by beings better than they are.

The combination of Kubrick’s original notes and ideas with Spielberg’s sensibilities does make for a sometimes awkward fit. Spielberg tries to keep a distanced eye, and for the most part succeeds. But sometimes he just cannot help himself and the camera zooms in on David as if he were Indiana Jones. The third act, too, fights between Kubrick’s general misanthropy and Spielberg’s sentimentality. Anything else, however, probably would not satisfy an audience.

Kubrick originally envisioned David as a CGI character, but Spielberg found the perfect human to pull off the role. Osment, so strangely adult an actor anyway, plays David just a half a beat behind the humans around him. As he tries to win over his new parents, you can almost see the circuitry flash as he decides that laughter would be the appropriate response to Monica having spaghetti dripping from her mouth. Thankfully, Spielberg trusts Osment to be his own effect, and it works. After David has experienced more, his responses become more natural, but he still has a slight air of the inhuman about him. 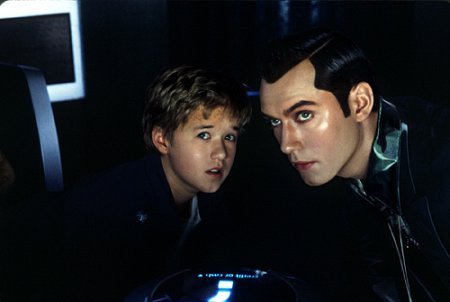 Allowed to be a little more obvious, Jude Law has fun with his role as Gigolo Joe, a mecha built for pleasure who David meets at Flesh Fair. In a nifty but underused gimmick, Joe can alter his hair color and style to be anything a trick wants him to be. And as the first humanoid mecha we see after David, Joe comes as something of a shock. We come to realize just how real David must seem, since Joe both appears vaguely plastic and comes with accessories. Law creates a character appropriately made up of specific poses, come-ons, and catch-phrases. Through his time with David, he, too, becomes more real, and the film loses a little energy when it loses him.

The actors playing humans do not fare quite as well, but then, they are all written as one-note people. In a nice Kubrick tribute, the mechas are far more intriguing characters than the humans.

In his first self-written screenplay in more than a decade, Spielberg seems a little rusty. Pieces of dialogue are pure poetry, and yet, some scenes exist only to provide clunky exposition. Maybe he labored too much under the shadow of his late friend. The structure, however, neatly parallels Pinocchio without being too obvious. (The film’s version of Pleasure Island resembles the Universal City Walk just a little too closely for comfort – the future is here.)

Ultimately, A.I. provides an oasis of big-budgeted thoughtfulness. It may be heavy-handed in some places, but it does provoke a lot of questions. How dare Spielberg make us think in the summer? We should be glad he did.