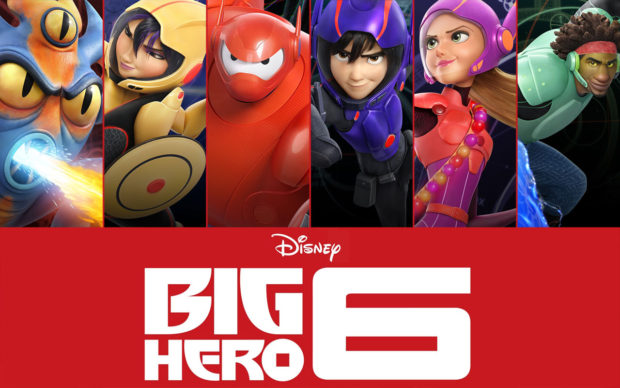 Remember when every movie based on a comic book was in its own stand-alone universe? When the world it built was one both familiar and fantastic, and somehow unique? Disney Animation does, too, offering the city of San Fransokyo, and the origin story of its protectors — Big Hero 6.

Not that this animated take on a relatively minor Marvel comic book doesn’t understand its relationship to the superhero genre and Marvel in particular. Big Hero 6 still has its nods to the Marvel Universe, with at least a couple of characters making cameos, and the exuberant genre-loving school mascot Fred (T.J. Miller) who gives everybody their code names.

In fact, because of its restrictions as an origin story, your enjoyment may vary. That’s the problem with our modern mythmaking — that hero’s journey almost always has the same beats. So the storytellers have to find those details that make it stand out.

Yes, Hiro (Ryan Potter) follows the path that many have before him, in both superhero origins and Disney movies. Living upstairs from an eclectic restaurant run by his Aunt Cass (Maya Rudolph), Hiro is a boy genius spending his time hustling robot fights instead of using his powers for good.

His older brother Tadashi (Daniel Henney) lures him into his college robotics lab, where Hiro can see the possibilities of going back to school and maybe making the world a better place. (And coincidentally meets a group of students — and Fred — with personalities and inventions that could become powerful weapons for fighting crime…)

On the eve of Hiro’s greatest triumph, a tragic accident occurs and… well, we all knew it was coming.

But a team of screenwriters led by Jordan Roberts found a decent enough twist in Baymax (Scott Adsit), the robot left behind by Tadashi. Instead of being the bad-ass giant robot that the scenic design would imply (both Hiro and Fred have collections of toy kaiju and mecha in the background), Baymax is …inflatable.

Round, almost featureless, and designed to cuddle, Baymax’s programming requires him to soothe and treat hurts, even, it turns out, emotional ones. If playing superhero will help Hiro mourn the loss of Tadashi, then Baymax will submit, even if it’s clear he doesn’t comprehend all of what is happening.

Despite its predictability, Big Hero 6 has everything it needs to resonate with families. For once, it’s a superhero movie that actually is appropriate for the whole family, particularly the children to whom all superheroes are marketed.

In its design, this Disney film offers enough to stir imaginations. The story emphasizes problem-solving and the possibilities of technology — though, of course, there’s a dark side to that or there could be no villain. Baymax becomes armored through Hiro’s computer design work and a 3D printer. It’s coming, people.

San Fransokyo immediately becomes a great setting for superheroes, futuristic yet familiar, and a subtle message about where our culture is headed — one great glorious mish-mash of styles and beliefs just somehow fitting together. (Okay, maybe it’s NOT headed that way, but wouldn’t it be nice?)

This movie also takes a leap forward in computer animation. One of the benefits of keeping Pixar and Disney Animation separate, even though John Lasseter oversees both, is that it feels like they’re still competing with each other, making leaps forward in technical ability to see what the other guy will do in response. Here, the lighting of scenes is amazing, with backgrounds that are so photo-realistic it’s almost jarring to have an animated character run across them.

Action scenes are a relief, because for this superhero battles don’t switch from highly paid actor to stuntman to CG — everything is one. It’s freeing to watch Baymax and Hiro fly over the Golden Gate and dodge fish balloons (which I assume you’ll be able to do in the videogame); no egos had to be salved in the creation of these sequences. This is a superhero movie with no distractions, other than “will there be any stuffed Baymaxes left at the Disney Store?” 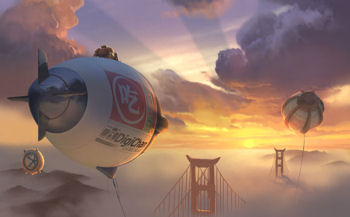 Unlike the Marvel comic, those that become Big Hero 6 aren’t already possessed of mutant power (yes, it was once vaguely related to X-Men). Instead, the “family nicknames” aspect of characters like Wasabi (Damon Wayans, Jr.) and Honey Lemon (Genesis Rodriguez) has a charm about it that takes away the literalness of their eventual armored abilities.

And yet, what will make the group Big Hero 6 memorable has yet to come. A regular 2D animated series would probably explore more — Wasabi, Honey Lemon, and Go Go get short shrift in favor of Hiro and Baymax. And even when he’s just a voice, T.J. Miller won’t be ignored.

The original team was created by Man of Action, the artistic consortium that also hatched Ben 10, so it’s obvious that Big Hero 6 is meant to keep on going. But the movie is also very different from what Man of Action did for Marvel — despite comic book origins, this is the fabled Disney Version all the way.

Really, that’s okay. Big Hero 6 is charming, exuberant, and kid-friendly. It’s also familiar, but that can be comfortable. I am satisifed with my care.