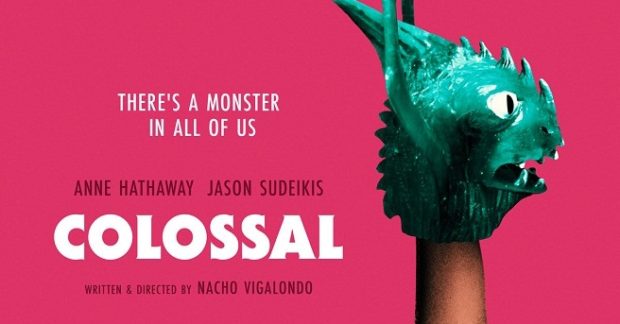 On a peaceful summer night in Seoul, a little girl searches for her doll. Just as she finds it, a giant monster appears in the park, and the little girl screams for her life. Dozens of monster movies have begun with similar scenes, but none of them have cut to 25 years later in a small depressed town in the U.S., though first there’s a stop in New York City, where Gloria (Anne Hathaway) finds that her alcoholism is destroying her “perfect” life with her boyfriend Tim (Dan Stevens).

Fleeing back to her childhood home with no prospects but a desire to figure things out, Gloria runs into an old friend, Oscar (Jason Sudeikis). It turns out that Oscar has taken over his father’s bar, and Gloria quickly falls into old, destructive habits. After blacking out drunk by a playground, and eventually stumbling home, Gloria wakes up to find out that a giant monster appeared in Seoul, wreaking havoc. What do her stumbling and the kaiju have in common? That’s the first and most improbable secret of Colossal, but it’s really just a macguffin (or a mackaiju), and it’s a giant monster movie. It doesn’t have to really make sense. 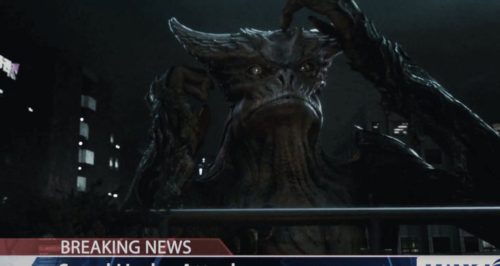 Except the second secret of Colossal is that whole monster thing? It’s a metaphor driving a much darker more serious film than the trailers and the posters imply. Technically, it’s a comedy from the mind of writer/director Nacho Vigalondo, but the laughs fade away as the film becomes an examination of personal responsibility, our own dark demons, and how it’s really easy to just not recognize them until it’s too late. Even when you do, long-held patterns are hard to break.

Hathaway is an actor that inspires mixed emotions, and that works well for this movie. If you don’t like her persona, well, Gloria isn’t necessarily meant to be that likable. We can understand why her New York boyfriend became fed up, and is continuously exasperated that Gloria makes it hard to let go without really changing anything. Sometimes she’s in control of herself, and sometimes she’s not, and she probably has charms in both states.

But this isn’t a romantic comedy with giant monsters. And though Gloria is responsible for her decisions, everyone around her is responsible for theirs. We all know an Oscar, too, the nice guy who’s nice up to a point, with something dark lurking behind Sudeikis’ too easy affability.

The cool choice Vigalondo has made is to take the kaiju aspect of the story and make it even more distant. In most kaiju movies, we get a thrill out of the destruction. The sets are often flimsy and obviously miniatures, and we don’t think of the cost in human lives, because it’s often just faceless screaming. (Toho Studios’ original and most recent Godzilla movies are exceptions.) Though mostly we see Gloria trudging through sand in a playground, it’s almost more visceral to see her horror when she realizes that half a world away, she destroyed lives. And when Oscar discovers that he, too, can incarnate as a giant robot next to her (both of them have to be in the playground at 8:05 a.m., and it lasts for less than five minutes), this beaten man discovers what power feels like. 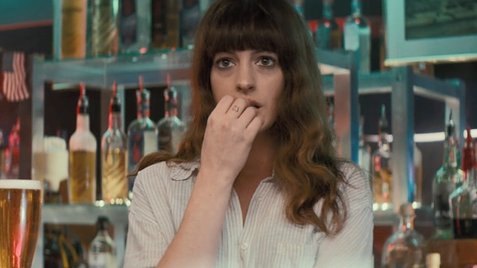 Also in on the secret are two bar mates, Garth (the great Tim Blake Nelson) and Joel (Austin Stowell). Their reactions and relationships with both Gloria and Oscar complicate things, and that’s the third secret of Colossal. It would be a well-acted, well-written movie without the monster and the robot. But then, it wouldn’t be such a delight even in its darkness.

Recently, my son complained to me about pop music. “Why can’t songs be about something else?” I thought of that while watching Colossal, realizing that I went in thinking one thing and then found that this was what my son was asking for — a movie about something else than it seemed to be. It may get a little creaky in places, but Colossal has ambition, and sticks in the head for a while afterward. You go in for a popcorn movie and find that you ended up with something healthier, and quirkier, and ultimately, a lot more memorable. 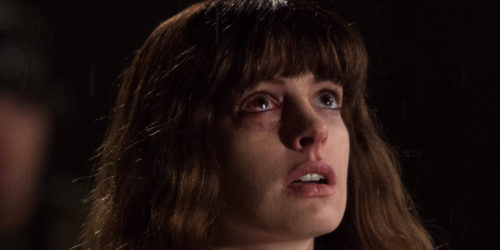