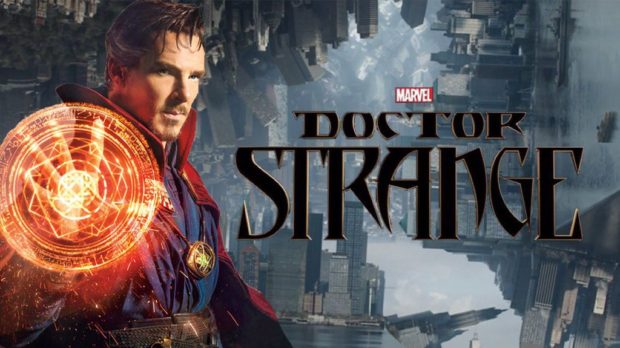 Strange? Perhaps a bit. Yet Doctor Strange could have afforded to be a bit stranger.

To tell the story of the Master of the Mystic Arts, Marvel brought in writer/director Scott Derrickson, a creator with a background in horror films with a more intellectual bent. That direction serves to make this a bit distinctive from the rest of the Marvel Cinematic Universe, and yet it’s also hard not to feel the push and pull of the larger epic of Marvel Studios putting limitations on it — call it the Krimson Kuffs of Kevin Feige.

Stephen Strange (Benedict Cumberbatch) has an origin that’s a bit different from the standard superhero trope, and for the most part Derrickson captures that. The film actually begins with a mystic battle between the Ancient One (Tilda Swinton) and her rogue acolyte Kaecilius (Mads Mikkelsen) before settling in to tell Strange’s story. If you’re painting by numbers, you have to start with an action set piece, but Derrickson really wants to build suspense like a horror film, so the fight is almost perfunctory. The meat of this — and really, the best part — is building up Strange so that he can be torn down.

A brilliant surgeon, Stephen almost seems able to beat death in the operating theater, but we get clues that he also carefully controls that reputation. He is good, and arrogant, and could easily have been a medical version of Tony Stark. (There’s a very subtle reference to Captain America: Civil War.)

But when Strange’s arrogance leaves him unable to perform surgery, his darker side really comes out. He pushes away his sometime paramour and ally, Christine Palmer (Rachel McAdams), and comes close to losing everything. For his entire life, failure has not been an option, and now there’s no other way. Until he hears of a mystic place of healing in Nepal.

This all happens at a leisurely pace, with a building sense of doom. The way Derrickson sets it up, Strange could just as easily be the villain or victim of his own story, and in a different genre might be. But this is a superhero movie, and it soon settles in to that.

There’s training to be done and humility to be learned. Aided by a more advanced student of the Ancient One, Karl Amadeus Mordo (Chiwetel Ejiofor), Strange slowly grows into the next phase of his life, even as his old one tells him this can’t be possible. And, of course, there’s this looming threat of the Dark Dimension and the much more powerful being that Kaecilius now serves.

Though not quite as mired in the larger story as Avengers: Age of Ultron was, Doctor Strange still loses something by already being committed to a Marvel Movie Phase. To be honest, there’s a missed opportunity in not setting this movie in parallel to earlier Marvel films, as Stephen Strange was name-checked in Captain America: The Winter Soldier. It could have just been because of his medical reputation, but how cool would it have been to know he’s been fighting the darkness for a while, just as he was originally introduced doing by creator Steve Ditko back in the ’60s? There’s even a macguffin in the script that would have made it possible!

There’s no point in trying to go back and deal with what isn’t, only what is. And that’s part of what Derrickson is trying to communicate. We’ve had Marvel heroes face themselves, face possible loss, and pull themselves back out of it, but when Doctor Strange quiets down, there’s a beautiful, almost mournful tone going on. Of course superheroes fight, but how often do they stop to really ponder what they’re fighting for?

It seems reductive to even call Doctor Strange a superhero, but those tropes keep breaking in, usually taking the form of Kaecilius and his zealots. There are some snappy bon mots, as the cinematic Strange considers himself funny, and a lot of fighting. Some of it has wit to it, and a little wonder, but it has to be said that the fights have also been seen in movies like The Matrix and Inception. (To be fair, those movies were partly inspired by Ditko’s trippy art, too.)

Maybe it was hard to go places that we haven’t seen before, outside of comics. But the production seems convinced these will wow us, and though the movie clocks in at under two hours (short for a Marvel movie in the last couple of years), there’s too much weight on action and not quite enough on character. Most motivations are spelled out in dialogue and not really earned in characterization.

Which is a shame, because every speaking character in this film shows so much potential. Take away the special effects, and Derrickson has assembled a small, tight ensemble, just as he would for a small horror film. Sure, there are crowd scenes, but this is always about personal connection, and how bad Stephen Strange is at it.

Cumberbatch clearly enjoys the role, striking a different kind of arrogance from his indelible Sherlock Holmes, even if his vocal mannerisms are often a Hugh Laurie impersonation. There’s often something unworldly about Swinton, and even though her casting was controversial, it can’t be denied that her performance is magnetic — almost enough on its own to make Doctor Strange worth a couple of rewatches. Even those in thankless stereotypical roles like Ejiofor and McAdams rise above it and give it their best. Mikkelsen was clearly cast for soulful eyes and his vague sneering expression, but it works.

As it is, Doctor Strange is good, but not great. It’s enjoyable. It could have been great. But in the great Marvel Movie Machinery, there really isn’t room for strange, and that’s a bit of shame.

* Should you want to read the early stories of Doctor Strange, here’s an Amazon link.