As Dana Gould points out in his notes afterward, it’s impossible to hide the twist of Planet of the Apes, no matter what version of the story is being told. So when going back and giving new life to the first attempt to shift Pierre Boulle’s original novel to a new medium, it’s not worth it to play coy. Instead, Gould and artist Chad Lewis focus on a vision of Rod Serling’s original screenplay that gives a taste of what might have been, and create a graphic novel that stands on its own as a legitimate reimagining of Planet of the Apes.

It may not be “visionary,” but it’s a mature, sober telling that pays homage to Serling, and makes an interesting side-by-side with the film that did happen. What a difference a couple of years make — Serling wrote the screenplay in 1964, with a human protagonist less sweatily macho than Charlton Heston’s Taylor. Instead, “Thomas” could have come straight out of an episode of The Twilight Zone.

As in Boulle’s novel, the civilization of the apes is a mirror of most 1960’s metropolitan cities. Lewis’ style gives it all a vague commercial illustration feel, and with a looseness to the characters that feels very European. Though there are still uniforms for different strata, chimps, gorillas, and orangutans also dress casually, and some are finely tailored. It is Thomas’ still wearing part of his space suit that stuns the apes — though they easily convince themselves that it’s the same way we would laugh when putting monkeys in clothes. Gould and Lewis easily translate the funhouse mirror that Serling saw in this material.

Though there are beats familiar to the 1968 film (heavily rewritten and redesigned from the original pre-production efforts), there are quiet surprises in this telling. The famous ending remains in spirit, but Gould (and Serling) have salted this version with clues that build toward it — and that clearly, the way Lewis draws him, Thomas is putting together even though he doesn’t want to reach the conclusion.

And then the vision ends, definitively. This view of what might have been makes a good and thoughtful side journey. 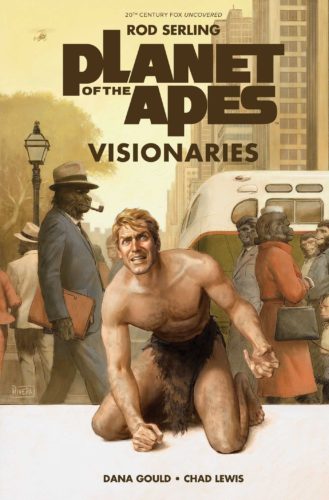