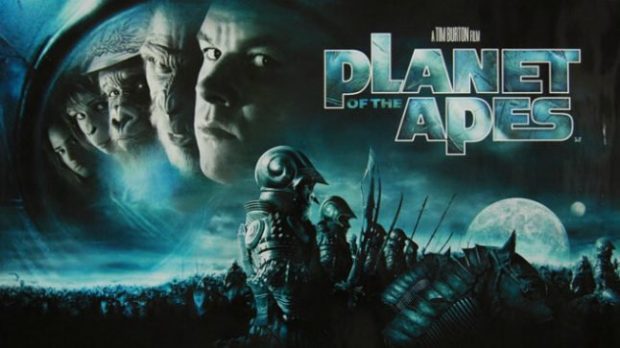 If you put a hundred monkeys at a hundred word processors for a hundred years, would one of them write a screenplay for a Tim Burton film?

The sun peeks over the horizon with a brilliant flare. Light creeps over a scorched desert plain. And then, a hairy fist thrusts a rifle into our view. That hairy fist belongs to a hairy arm, the arm of a gorilla warrior. All the while, drums thump at the edge of our hearing. For many, that image defines the Planet of the Apes. Everybody remembers a bunch of guys walking around in gorilla suits, growling, with a few British actors hunched over to simulate being chimps and orangutans, pretending the work was not beneath them. In retrospect, you can’t escape that the whole concept was kind of cheesy. Give Tim Burton credit for battling to get away from that. Still, they’re monkeys, man…talking monkeys. Can they make the box office their conquest in 2001?

Instead of the ultimate male Charlton Heston, Burton’s Planet of the Apes gives us Mark Wahlberg as Captain Leo Davidson. He works on Project Oberon, stationed in space training genetically enhanced chimpanzees to pilot probes into stellar phenomena. But he’s torn; as much as Leo likes his prized chimp pupil Pericles, he wishes he were the one flying the probes. Fate takes a hand in the form of a cosmic storm that rips Pericles out of contact. Going against his superiors’ wishes, Leo hijacks a probe to follow Pericles. Meanwhile, the crew of the Oberon picks up bizarre distress calls coming from …themselves.

Of course, Captain Davidson gets ripped through time and space to crash on a planet that at first looks suspiciously like Dagobah. Instead of hanging with a puppet, however, he hooks up with a group of humans fleeing the savage (but nicely uniformed) apes of this world. From this moment on, Burton’s unique vision takes hold. You’ve seen the commercials and already noticed that these apes do move far more like apes than in any of the previous incarnations. But what Burton and various screenwriters have also brought is apes that act like apes. They leap and pounce upon these running humans. For the first time in years, the thought of intelligent apes attacking looks frightening. And then they speak.

A confused Davidson, lying on the ground, accidentally touches the booted foot of Attar, a prominent gorilla played by Michael Clarke Duncan. The ape looks down and sneers “get your hands off me, you damned dirty human.” Yes, Burton’s Planet of the Apes isn’t so much a remake as a re-thinking of the concept, and that re-thinking includes the hip ironic edge that today’s audiences demand. Even though we want to believe in this world, the filmmakers have to remind us that it is, after all, only a movie, and that we’ve sort of seen it before. By the time Charlton Heston makes his inevitable cameo, it’s hard to know if we should take it seriously or not. Most will vote for the not.

At times, it starts to feel like The Flintstones. Thankfully, the film avoids making bad puns in the service of its humor, but still, the “ape city” has a closed-in, Disneyland feel to it, and many of the scenes there have visual jokes to remind us of our own culture and vanities. Kids play a ragged basketball. An old chimpanzee takes off his toupee for the night. And, in a culture with no recognizable technology and certainly no electricity, a teen ape gang hangs out smoking and listening to techno. Never mind that escaping human servants seem to have this strange knack for running into such places when they should be trying to get away unseen.

Take heart, at least, that the humans here do avoid having the usual post-apocalyptic mystical prophecies. They are a people without hope, being hunted down into extinction by the villainous Thade (Tim Roth). If they have an organization, it never gets made explicit. The de facto leader seems to be Daena (Estella Warren), but that may be only because she has the most screen time. They look to Davidson to do something, anything, to strike a blow for equality with the apes, not because they have long awaited this chosen one, but because he’s there. Only Davidson can fight, because it never occurs to him that he can’t. If only Wahlberg had been more magnetic.

Burton has long had a fascination for tweaking the image of the hero. In Apes, Davidson recognizes that things are out of whack, but the impending genocide of the planet’s humans really doesn’t concern him as much as finding a way home. As a result, Wahlberg makes a big void in the center of the movie. The truly noble characters end up being two apes, the lovely chimpanzee Ari (Helena Bonham-Carter, disturbingly attractive) and disgraced silverback Krull (Cary-Hiroyuki Tagawa). They strike against the norm of their society, and in Krull’s case, fight against their long-held distaste for humans to do what is right.

All the apes, in fact, end up being far more vivid than the humans. As the slave trader/con ape Limbo, Paul Giamatti provides purposeful comic relief that doesn’t distract from the action. Roth makes a terrifying chimp, and of course, a great villain. The gorillas all blend into one, though, even with the towering Duncan as their leader. Tagawa does strike a graceful note as the one gorilla not mindlessly part of the crowd, but he seems the least comfortable in a gorilla suit. On him, it looks like a big prosthetic, though he still manages to do some beautiful sword-work within it.

Planet of the Apes has a more coherent story than usual for this summer, though you still shouldn’t think too hard about its plot twists (in a world with no communications systems, how do all the tribes of humans find out about the man who defies the apes? Shut up and have another Red Vine). It’s goofy, but it has moments of good thrills.