Whether you like The Last Jedi or not, there’s one thing we can say for sure: no director has loved Star Wars as fully as Rian Johnson. The film isn’t just the next chapter in a saga that threatens to outlive us all; it’s also as full of metatextual references as Anakin Skywalker’s blood was full of midichlorians. And even then, that doesn’t sum up all that Johnson is going for in this film — so if you loved it, you’re right. If you found it off-putting, you’re right. Johnson isn’t just making you feel with this installment — which, really, is all we’ve asked for since we first journeyed to a long time ago in a galaxy far, far away — he’s making you think about how you feel. And that’s a run that can’t be done in less than twelve parsecs.

Beginning within hours of where The Force Awakens ended, The Last Jedi has an almost completely different tone. Where The Force Awakens was often awkwardly reverential toward the original films, The Last Jedi is referential, using that to re-examine just what it was all supposed to mean to us. Given room to take the story where he wants, Johnson’s script makes bold choices, many of which fly in the face of two years of fan speculation. But as someone who remembers all the Luke/Leia ‘shipping (before shipping was a term), it’s time to remember that that’s all it was — fan speculation.

Though we wanted Luke Skywalker’s (Mark Hamill) first words to be portentous and wise, they’re dismissive. After all, he didn’t hide because he was being coy and waiting for the right moment to come back and save the galaxy. That’s what we wanted to be the truth. When we get the real truth of what happened between Luke and Ben Solo (Adam Driver), it comes down to both of them being terribly human. While we can still cling to black and white, there’s just enough grey there to realize that both Palpatine and Obi-Wan Kenobi were right: it all depends on a certain point of view. 40 years earlier, that only strengthened Kenobi’s resolve; now, it’s broken Luke.

But it also gives Luke (and Johnson) a chance to redefine the Force for Rey (Daisy Ridley). Actually, it’s not redefined — it’s taken back to its roots. The Force is the energy that binds us all, but decades of building up a farm boy into a legendary hero (and decades of ancillary video games) have made the force into something all about power and grand gestures. It needs to be restored to George Lucas’ original, simple yet complex definition: it’s everything.

But for the average person stuck in the middle of this grand space opera, what does it really mean? It’s a religion to offer hope, but the war still has to be fought by people. While all that mysticism is happening on a remote planet, Johnson really starts the action with the hot-shot pilot Poe Dameron (Oscar Isaac) and the defected stormtrooper Finn (John Boyega). Though we like them because they’re charismatic actors, the director shines a light on their flaws: hot-shots get people killed, and Finn isn’t a hero at all — he just wants to run away, though a puppyish infatuation with Rey slowed him down.

So the situation gets flipped on Finn with Rose Tico (Kelly Marie Tran), practically hero-worshipping Finn for bravery he really never exhibited. However, Rose has a sense of duty stronger than her infatuation, and she will guide Finn through an arc he sorely needs. That arc also explores what’s going on to power the battles between the Resistance and the First Order, something Lucas tried to discuss a bit with the prequel trilogy: who profits by all this conflict? Why aren’t we asking that question more often?

Johnson still packs this film full of the moments that make Star Wars Star Wars, only sometimes turning them on their heads. As Lucas was inspired by movies of the 1930s and 1940s, Benicio Del Toro’s shifty DJ could have walked right out of a Humphrey Bogart film. You want to see Leia (Carrie Fisher) finally demonstrate the Force? It’s there, too. And tragically, this is also the most lived-in, real performance Fisher was able to deliver as Leia. Finally, she’s not a space princess, but a leader, and so very human.

Many lines echo dialogue from the original trilogy, though now they’re more tossed off and mixed in with modern vernacular. It’s a little jarring, but then again, how many fans complained about how stilted the original dialogue and delivery was? How many actors complained? Then there are porgs and ice foxes and a few other creatures that are a marketing department’s dream. As calculatedly adorable as they seem, they never get in the way. To some extent, they even serve the theme — there are little things to be saved from the great machinery of war.

And there are little things to be saved from your childhood memories. Johnson references Spaceballs and Hardware Wars, slyly acknowledging how deeply Star Wars has affected our culture. (And how much fans have devoted to books and comics and toys and games…) It’s not wrong to have loved it. At some point, though, you have to let it grow into something new.

Maybe The Last Jedi isn’t that perfect something new. But it’s reaching for it, helping bridge to new ideas with new heroes. Johnson got a chance to play with all the toys in the toy box, and used that to move beyond. It’s not time for the Jedi to end, just time to acknowledge a movie from 40 years ago as the beginning. It was a long time ago. Now we have to look toward tomorrow. 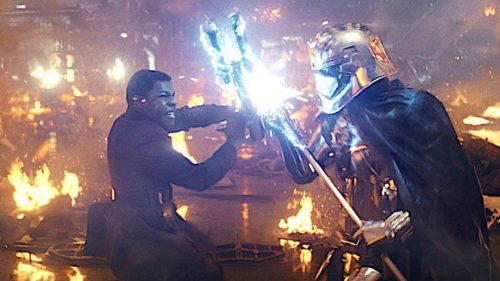