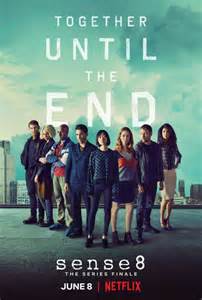 Netflix revealed that the finale of their original series Sense8, from Lana and Lilly Wachowski, will premiere on the streaming service on June 8th.

The show was initially cancelled after two seasons; however, after numerous fan petitions, the streaming service reversed their decision and decided to have a feature length finale wrapping up the series.

Personal lives are pushed aside as the cluster, their sidekicks, and some unexpected allies band together for a rescue mission and BPO take-down in order to protect the future of all Sensates. The highly-anticipated conclusion on the sage of the Sense8 cluster will be revealed when the series finale launches globally on June 8, only on Netflix.