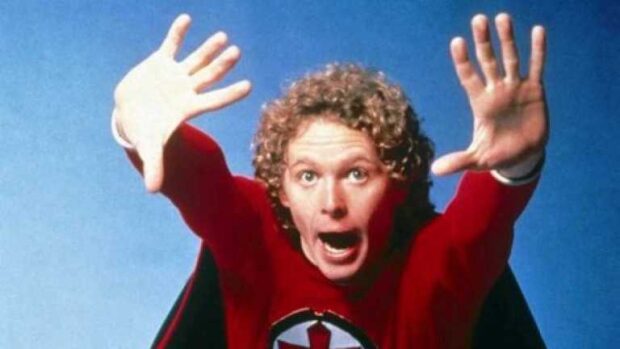 He’s not alone — the distributor struck a deal with Stephen J. Cannell’s estate for access to more than 20 series and movies from the venerable producer. In that almost 900 hours of content, there are cult classics such as Stingray and Jeff Goldblum in Tenspeed and Brownshoe.

“Many Stephen J. Cannell series have already proven to be immensely popular with viewers and fans over the years. We’re incredibly excited to bring these memorable series through Shout’s distribution channels. There are a lot of untapped opportunities to distribute this content through digital, streaming, transactional outlets and emerging entertainment platforms. As we’re aggressively expanding our content offerings of quality series and movies, this deal exemplifies the type of major acquisitions we plan to pursue actively.”

Some of you may know The Greatest American Hero has a personal resonance for me, as I co-wrote the comic book revival back in 2009 for Arcana Comics with original star William Katt and Sparks director Chris Folino, and art by Clint Hilinski. Centered on the adventures of a high school English teacher given a super-powered suit by aliens, the series followed what happened when he lost the instruction manual. Ralph Hinkley fought the good fight anyway, aided by FBI agent Bill Maxwell, played by Robert Culp, and Ralph’s fiancee and later wife Pam Davidson (Connie Sellecca).

It also has one of the greatest television theme songs of all time.

There’s been a lot of talk over the years of a remake, but so far it hasn’t happened. Maybe with a boost from Shout! Factory, the interest could be stirred again. I don’t know. But I’d love to see it happen. For now, I’d just really like a blu-ray edition of the series.