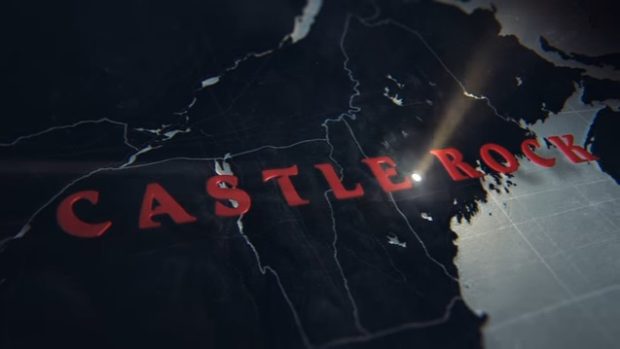 Last week fandom got excited by a trailer from Hulu — the announcement of a new series from J.J. Abrams and Stephen King, called simply Castle Rock. Today we have details from Hulu:

Hulu is taking viewers into the chilling world of acclaimed, best-selling author Stephen King in the new Hulu Original drama series Castle Rock, from J.J. Abrams’ Bad Robot Productions, Warner Bros. Television and executive producers/writers Sam Shaw & Dustin Thomason. Hulu has ordered a 10 episode first season of the on-going series, with production set to begin this year. A teaser trailer for Castle Rock has been viewed more than one million times since it was released on Friday, Feb. 17.

A psychological-horror series set in the Stephen King multiverse, Castle Rock combines the mythological scale and intimate character storytelling of King’s best-loved works, weaving an epic saga of darkness and light, played out on a few square miles of Maine woodland. The fictional Maine town of Castle Rock has figured prominently in King’s literary career: Cujo, The Dark Half, IT and Needful Things, as well as novella The Body and numerous short stories such as Rita Hayworth and The Shawshank Redemption are either set there or contain references to Castle Rock. Castle Rock is an original suspense/thriller — a first-of-its-kind reimagining that explores the themes and worlds uniting the entire King canon, while brushing up against some of his most iconic and beloved stories.

Castle Rock reunites Hulu, King, Bad Robot and Warner Bros. Television, which previously collaborated on event series 11.22.63, based on King’s novel. The series will stream exclusively in the U.S. on Hulu and Warner Bros. Worldwide Television Distribution will distribute globally.

Castle Rock is based on characters and situations created by Stephen King. Sam Shaw & Dustin Thomason developed the project for television and serve as executive producers along with J.J. Abrams, Ben Stephenson and Liz Glotzer. The series is from Bad Robot Productions in association with Warner Bros. Television.

As noted in the press release, this collaboration has brought us 11.22.63, and even that wasn’t the first time that Abrams and King have tried to work together. Years ago, Abrams allegedly bought The Dark Tower rights for $19, though those apparently lapsed.

And the idea for Castle Rock really isn’t new, either. As the teaser establishes, King has been working in his own shared universe almost from the beginning, with The Dark Tower series of novels firmly establishing connections between his works — including those for television, such as Kingdom Hospital.

Shared universes are all the rage, but this one should be the most solid, because it’s all from the mind of one man, amplified by another who has some experience bringing visions to life. We might not actually be seeing Pennywise, since a new adaptation of IT is coming to cinemas, but maybe we’ll still see some elements. Since Danny Torrance is referenced, perhaps some elements of Doctor Sleep will make their way into the series. Or maybe, just maybe, the town of Castle Rock is scary enough on its own.