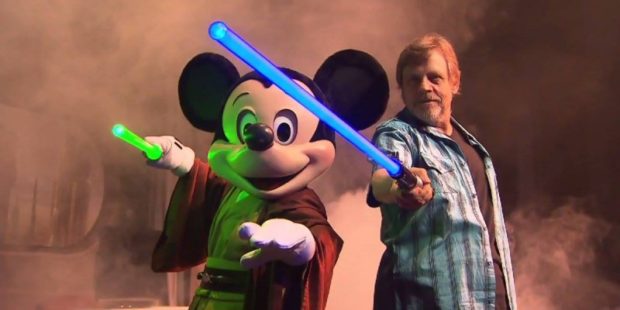 At Star Wars Celebration this weekend in Orlando, Disney Parks and Attractions revealed a little more about the in-progress Star Wars-themed lands developing in both Anaheim and Orlando. They unveiled the following video which features a look at Imagineers working on designs and models, as well as the philosophy behind the attractions. No big surprises there, as some of the artwork had been released before, but it’s also kind of cool seeing the crags and peaks of the mountains on this new alien world, which at least in Anaheim will blend seamlessly behind “Big Thunder Mountain Railroad” in Frontierland. Once you walk past that attraction, you’ll find yourself in a galaxy far, far away, in a land that’s even bigger than Disneyland’s current guest parking structure.

The above video played at a panel moderated by voice actor David W. Collins, who told an excited crowd that he had visited an Imagineering campus in California and seen the new lightsaber technology being developed for use in the attractions. “I saw them,” he said, “and they’re real. Lightsabers are real.”

We just won’t be able to see them until 2019. More news will likely be announced at D23 in Anaheim in July.

The full panel is below, courtesy of Inside the Magic: