In 2005, occasional contributor Daniel DeFabio offered up a series of highly literary Elseworlds and What If — ? ideas, which I loved. As I’ve been slowly working through the almost two decades’ worth of Fanboy Planet material to bring to Fanboy Planet 3.0 (the version you’re reading now), this piece leaped out. Rather than let it stay buried in the archives, I’m taking advantage of #TBT to start re-running “best of” pieces — and this one absolutely qualifies. Also, Daniel was and still is a talented filmmaker who alas no longer lives in Los Angeles. But he and I worked together for Mark Hamill and Creative Light Entertainment on the fake comics history site Once Upon a Dime.

With original commentary, from 2005:

In what we hope will be a monthly column, occasional contributor Daniel DeFabio offers up yet another strange “What If — ?” that should make Joe Quesada stand up and take notice.

Yes, we know that we’re marking Daniel and ourselves to be intellectuals and first up against the wall when the revolution comes, but hey…that’s the risk we’ll take to be viewed as “smart comedy.” Though we agree that perhaps, just perhaps, Daniel has entirely too much time on his hands.

And now, Washington Irving’s The Legend of the Ghost Rider…

To a homeless man, as indeed most carnival men are, there is a momentary feeling of something like independence and territorial consequence, when, after a weary day’s travel, he kicks off his boots, throws off his leathered jacket, and stretches himself before an inn fire. How John Blaze came to this small fire upon his burning quest for a fire as much more deadly as the bear is to the possum, is the tale I myself heard by an inn’s fireside and share with you now. 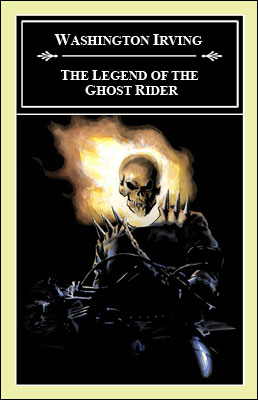 All men, but most especially the wanderers, have their demons. John Blaze had met his demon, had felt him burn within him and knew his faceless countenance as if it were his own. Of late the demon had escaped young master Blaze, but peradventure word was had of a ghostly rider in the upstate New York burgh of Tarry Town. The descriptions, even discounting the inevitable hyperbole of the small town gossip, bore uncanny similarities to the demon Blaze pursued. The news of this baneful rogue, so burthened the mind of Blaze that he set at once north along Hendrick Hudson’s river, though he had never before distanced further than Greymalkin Lane in the West of Chester.

As John Blaze came unto the portion of the town called Sleepy Hollow, few were those without a tale to tell of the spectral rider. They were to a man much given to the marvellous. Some claimed he was a goblin hurling pumpkins as bombs aflame at riders in the night. This hellfire mounted spectre was called by some DareDevil but by most simply the Ghost Rider. This plurality suggested DareDevil was the name not of the spectre, but his demonic conveyance. A great chopper made of flame bore the faceless rider faster than fifteen score horses’ power. It issued forth as a knight errant so doused in forbidden lore as to be able to soar past all men, beast or bike. The ghoul was seen only by dark, most oft on the road by the graveyard.

The last ray of sunshine departed – the bats began to flit by in the twilight – and Blaze went out to meet his demon. The road grew dimmer and dimmer to view; and nothing appeared stirring in it. Then he heard the roar of the hellfire bike. A mad cackle like Macbeth’s crones, followed soon after. Any lesser man’s knees would smite together and these sounds would precipitate his retreat. What John Blaze thought then I can not tell, for I do not know, but it is no mere guess that he was chilled to the quick.

The moon had poured her downward light upon the rich forrest and soon the Ghost Rider rode into view like some ancient knight errant. His leggings and jacket both leatheren and rusty black. The jacket was bedecked with a perplexity of stupendous brass buttons. But atop the jacket was no head, rather the fires of hell and a grinning gleaming skull. No eyes shewn in the sockets, no tongue shewn in the craw, but some manner of metempsychosis animated the the skull and body both.

The bike wheeled its broad front disc to a sudden stop, just inches from bold John Blaze. The heat of the fiery cycle stuck in the nose and throat like cotton. Brave master Blaze began to wish he was confronted by some mean goblin or like easily conquered adversary.

The fiery skull reared back and let loose laughter purchased by the torment of weak mortals foolish enough to believe they might elude the spirit of vengeance. The Ghost Rider pointed his gloved hand at Blaze and poured forth soul searing hell fire. Blaze did not falter, he knew his sins and was fain to endure them. If this appalling act of vengeance could claim him he would not endeavor to avoid it. The blast of hellfire approached him, an insuperable wall of flame. But being no fool, he raised up his own weapon, a mere earthly shotgun of rusted iron and worm eaten wood. The flames poured into the barrel of his fire lock, and were swallowed up in it. To tell the precise truth the hellfire had bewitched the weapon.

Blaze recoiled from the blast but triggered his gun and found it shot forth that verysame hell fire. The demon rider could not endure the soul searing flames he had doled out upon countless mortals. He wheeled his demon bike away and Blaze gave chace. It is meet I should mention that Blaze himself was a rider of no small skill. But borne on his earthly mount Blaze could scarce hope to overtake the demon. The Ghost Rider disappeared into the night.

And so the story ends but not for Blaze who would continue his quest for the demon all of his days.