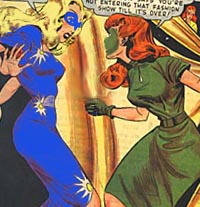 With comic books as the hottest commodity in Hollywood why hasn’t there been any talk of a Mary Medusa movie? As a long time Mary Medusa fan, I’ve dreamed of seeing the Make-up Marvel in living Technicolor deploy her HairNet or toss a LipBomb.

Of course I realize that Mary Medusa may not have the same pop culture cache that some of the more current spandex crimebusters have, but she has always held on to an important piece of my heart. For those of you who don’t know your comics history, let me tell you about one of the classiest lady crimefighters to ever bust up a counterfeit cosmetics ring.

In June of 1943, under the shadow of Rosie the Riveter, Mary Medusa first appeared in issue 4 of Pretty Exciting Stories. The book told the story of professional beauty pageant contestant Mary Moore who lived the life of glamour by day and at night donned a hideous mask in order to fight crime.

Pretty Exciting really found its stride with the premiere of the Cosmetic Crusader. She made her next appearance in issue 8 and by issue 12 she was the regular star of the book.

Issue 13 might be the right place to start, as that was the first time Pretty Exciting spun the yarn of Mary Medusa’s origin. In the Grand Cliff Beauty Pageant, Mary Moore was all but a lock until a gangster’s unnamed girlfriend (later given the name Betty Greico in the 1956 retelling of her origin, ‘A Girl’s Best Friend’) was a late entry into the contest and her victory was bought.

By coincidence, the gangsters chose to pay off the judges in the alley behind the hotel Mary was staying at while in town. Mary heard the transaction being made and, still wearing her green beauty mask, climbed down the fire escape to confront them.

The judges panicked at the sight of the furious Mary with wild hair and a green face. They dropped their money and ran. The two gangsters stood their ground but Mary’s famed redheaded temper and an accidentally thrown nail file secured the Beautiful Brawler’s first victory. Of course, she took the payoff money and distributed it to each of the girls who had been cheated out of their fair chance at the prize money and the fame.

With this first accidental adventure, Mary Medusa was born. At night after the girls on the pageant circuit had turned in, Mary Moore distorted her comely features with green makeup and even hid her glamorous identity by wearing either tattered dresses or (gasp!) men’s slacks.

Early on MM was simply a playful riff on Pretty Exciting Stories‘ other girl detective characters, like Penny Eye and Shirley Holmes, but as she took over the book she evolved into a full fledged super-heroine.

She began adapting various beauty products into gimmicks and weapons that she carried in her trademark green purse. Obviously the first weapon was that flung nail file but as the series went on the gimmicks got more complex. In issue 14 the HairNet made its debut to snare an escaped lion, and issue 16’s story ‘Wallflower’s Shoppe’ was the first time Mary concealed herself within the canopy of the EyeShadow.

Pretty Exciting was cancelled after issue 18, but not before Mary gained a few enemies, including the first recurring villainess, The Glam-Marauder. As Mary’s nemesis, The Glam-Marauder robbed her victims after distracting them with her dazzling diamond encrusted dress. The Glam-Marauder’s ranks were soon joined by Halo-Girl and The Giantess. Eventually all of these villains would form the infamous Glamour Guild, triumphing greed and a ‘flaunt what you’ve got’ attitude that enraged the usually demure Mary Medusa.

Dormant since 1944, Mary saw a revival in 1956 as an attempt to match DC’s successful rethinking of The Flash and Green Lantern. The publishers decided that Mary’s fun adventure fare was too light for the Cold War climate of 1956. They also believed that grounding some of the book’s endearing buoyancy might attract more boys to Double M’s adventures.

The first revamp attempt was Mary Medusa’s Adventure Tales and the back-up story in the first issue, ‘Belle of the Ball,’ introduced Mary Moore’s shy young assistant, Vickie May. Vickie was a homely orphan that Mary rescued from an abusive horse trainer during an appearance at the Kentucky Derby.

Vickie soon discovered Mary’s secret, proving herself to be an apt sleuth as well as a scrappy fighter when the chips were down. Knowing she couldn’t convince Vickie to stay home while she was out adventuring, Mary did her cosmetic magic on Vickie, making her into the ravishing Belle. As Belle, Vickie had the confidence to stand-up for herself but come daytime she had to return to her plain appearance so that their enemies could not conclude her and Mary’s secret identities.

While the introduction of Belle did darken the stories a bit, it failed to bring in the male audience the publishers were seeking. Vickie would often sulk knowing that every boy would give his eye teeth to get a kiss from Belle, but was unable to get anyone to look twice at her as the plain Vickie May.

Of course, not being top of the heap seemed to come with the territory as Mary Moore never once came in first in her numerous beauty pageant appearances. Usually she would take second place after losing points in one category or another due to her crimefighting career.

A prime example came in the issue 3 story, ‘Sing for Your Supper,’ when Mary, after tangling with the shrill Songbird, lost her voice. Still able to compete in the appearance portions of the competition, she was incapable of singing in the talent competition and her improvised dance presentation suffered from a lack of preparedness. Often Mary would end a story telling the girls at home that her sacrifice for justice more than made up for her second place ribbon.

Speaking of addressing the girls at home, all four issues of MMAT showed that the publishers hadn’t completely given up on writing a book for girls as they also featured the ‘Hey Girls!’ make up tips page that separated the lead story from the back-up adventure. In each issue Mary gave her fans a quick lesson or two in applying makeup, using Belle as her demonstration face. Each lesson would end with Vickie worrying that the improvements would allow people to realize she was Belle to which Mary would always reply with the immortal, “Remember, girls, it’s easier to keep up appearances when you keep up your appearance.”

Sales of Mary Medusa’s Adventure Tales were poor and the book was cancelled before issue 5 hit the racks. Some believe that issue to have been actually printed; for die hard fans of Miss Medusa, a crate of unshipped issue 5 has become a kind of great white whale that has haunted many of our dreams.

While she may not be in vogue in the mainstream these days, the time is ripe for a Mary Medusa resurgence. Not only could the Gorgeous Gorgon do well with a modern post-feminism retread, but a classic version could make for a fabulous TV series or movie franchise. It would feature a strong female hero for the girls and plenty of eye candy for the boys and all would be thrilled with the action.

The very rare Mary Medusa merchandise still resurfaces at the collectible shows and on EBay from time to time with a dedicated fanbase that might be a little bigger than you would guess. Just recently a set of Mary Medusa Compact/Signal Mirror along with the matching LipBomb with cap popping action sold for well over $50. So wake up Hollywood, the Cosmetic Crusader is ready for her close-up.

(Once Upon a Dime was a website created in 2003 to tie-in with Mark Hamill’s directorial debut, Comic Book the Movie. Though written by J. Dobbs, this article was originally attributed to Derek Sprang, Tom Kenny’s character in the movie.)