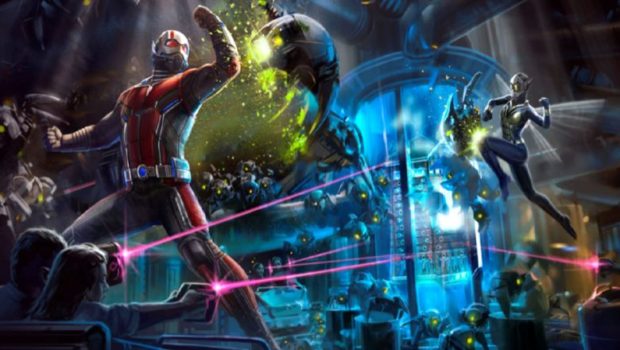 Tuesday, Disney Parks Blog revealed that the newest Marvel-based attraction, “Ant Man and the Wasp: Nano Battle,” will open in Hong Kong Disneyland on March 31st. The attraction will join “The Iron Man Experience” in the Hong Kong park, with no current plans to bring them stateside.

The premise will take guests to the S.H.I.E.L.D. Science & Technology Pavilion at Stark Expo (setting of the Iron Man attraction as well). However, Arnim Zola and his army of Hydra swarmbots have attempted to take over the facility. Guests will need to team up with both Ant Man and The Wasp in order to save the facility in the interactive ride experience. Similar to “Buzz Lightyear’s Astro Blasters” in Disneyland Anaheim, this ride technology and vehicle in Hong Kong will be much more advanced.

Paul Rudd and Evangeline Lilly both recreated their performances from the Marvel Studios films for the attraction. “I have been a Disneyland fan my whole life,” said Rudd. “To have an attraction as Ant Man at Hong Kong Disneyland is so exciting.” Added Lilly, “It’s such an exciting moment for a female heroine to be in the title of a Marvel film. For the character to also have her own ride is an incredible honor.”

The attraction is one of many attractions based on Marvel Studios properties in development across Disney Parks around the world. It joins such Marvel attraction as “Guardians of the Galaxy : Mission Breakout” at Disney’s California Adventure. More official announcements regarding all Disney Park attractions will be announced and discussed at D23 in August of this year.