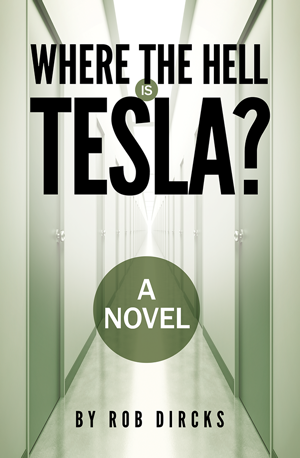 Rob Dircks’ novel Where the Hell is Tesla? is a fast, fun and funny read. He creates a quantum playground that accomodates almost every fanboy fantasy. Its style has bits of Douglas Adams and Jonathan Scalzi’s Redshirts. The content has nods to the Fantastic Four, Doctor Who, ET, The Twilight Zone, and even Abbott and Costello.

Written as a series of emails from another dimension, we find Chip and Pete and their strange, lovable, fuzzy, alien sidekick Bobo trapped in an infinite hallway with doors to all of the dimensions of the multiverse of all possible existences. The trouble is the doors aren’t labelled and they can’t find their way back home. At least not to the home that is exactly like their own. They often find a dimension that is mostly similar to their own but just one little difference throws it all off. A difference such as lighter gravity, meaning Chip and Pete are super strong in that one dimension and actually brand themselves as super heroes The Brute and Awesome Man.

Their journey of infinite possibilities began when Chip discovered the journal of inventor Nicolai Tesla. It indicated he had created an INTERDIMENSIONAL TRANSFER APPARATUS. They locate it and discover it looks like a dull gray never-ending hallway. Behind one door is a blue forest planet, another holds mostly empty space with just fragments of an exploded earth, another finds high tech weapons hurled at them before they can enter. Eventually they discover Tesla is alive but trapped in one of the dimensions, so they need to rescue him. Oh, and there’s a big bad named WHO bent on destroying all of the dimensions except his one personal favorite. So they should probably try to stop him.

Where the Hell is Tesla? is a great read for any sci-fi or comics fan. At times the email conceit gives way to asides sort of like breaking the fourth wall with more direct address of the “Oh I forgot I’m supposed to be telling you a story here” variety. These pop up a bit too often for my taste, but they seem to serve the casual tone well. My only other quibble is I could personally live without a retread of Abbott and Costello’s most famous routine. But I suppose in a multverse of infinite possible worlds there has to be at least one where someone does the sci-fi version of “Who’s on First?” 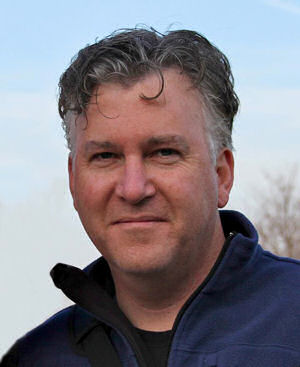 Author Dircks, a friend, sat down with me to talk about his project.

Daniel DeFabio: How did you choose Tesla as a subject?

Rob Dircks: One day I stumbled across this outrageous conspiracy theory article about Nikola Tesla, how he had secret journals that disappeared after he died, that the FBI took them, and that they contained plans for death rays and god-knows-what else.

Maybe an hour later, I was still digging down this Internet rabbit hole, finding little scraps of hints and clues, this wonderful bottomless pit of Tesla intrigue, and I said to myself: what if he had something REALLY crazy in those journals? Like an Interdimensional Transfer Apparatus?

Side note: I also loved Tesla in The Prestige, especially David Bowie playing him. That rocked.

Daniel DeFabio: You thank a Tesla family member, William Terbo. Did you get useful input from him?

Rob Dircks: Tesla died penniless, in debt actually, with no family. EXCEPT William Terbo. It turns out Tesla’s last living relative, his grand nephew, is this 85-year-old regular guy living in New Jersey.

As I wrote the parts of the book, I’d snail mail them to William (no email, please!), and we’d talk about whether Tesla would say this or that, what his views were on things like alcohol or taking risks or whatever. William’s a great guy. And sharp as a tack at 85.

Daniel DeFabio: Was the style of writing [as if by email] there from the start as you came up with this story?

Rob Dircks: When the first scene with Chip came to me, sort of amorphous, I actually sat down and typed it as an email to my brother Ken. So the voice was very casual, and the email form lent it a sort of immediacy, like “hey, are you there?”

I didn’t pick it up again for months, but when I reread it, I liked the urgency of the email, and how intimate it felt — just one person communicating with one other person. So I ran with it.

Daniel DeFabio: Did the story change much from your first concept of it to the finished version?

Rob Dircks: In the beginning I thought the story might be more about Tesla, but it’s really so much the story of Chip, and his burning desire to get home to his girl, and how he grows up a little through the book. So I was okay making everyone else sort of orbit around Chip.

Daniel DeFabio: Were there many other possible dimensions you considered exploring but left out?

Rob Dircks: Sure. Lots of ideas about other beings that would have evolved differently than humans under different circumstances. A race of huge cockroaches (they survived an apocalypse). Dinosaurs. A really dark dimension, where they’d have to figure out how to see ultraviolet light. The inside of a planet-sized creature who swallowed Earth at some point in the past. And lots of head-scratchers — like what if they found a dimension with another Tesla in it? Or a BUNCH of Teslas? Yikes.

The biggest one I left out was Bobo’s dimension. The whole time I was writing, I was thinking “where the hell did Bobo come from anyway?” I thought about it a lot, but that would have been a rabbit hole, too. The book would have been twice as long.

Daniel DeFabio: What would you compare this novel to in style?

Rob Dircks: For books, maybe Pratchett and Gaiman’s Good Omens. I loved the casual dialogue style of the two main characters – they’re at odds constantly, but underneath they’re best friends. Their dialogue is priceless. I can only hope to ever write that well.

As far as the serial-letter format style, I don’t think I’ve read enough to do a fair comparison. I’m sure there are plenty of books in the serial-letter form. But from my limited personal experience? I just read The Martian by Andy Weir, and it’s written in a diary form that’s similar, his diary of being trapped on Mars alone and trying to figure out a way home. Great use of the form.

Also for some reason Cormac McCarthy’s The Road pops into my head. He didn’t pay much attention to traditional form, indents, Strunk & White stuff in that book. He just wrote the story in a really intimate way.

Next up for Dircks is an audio book called Can of Beans, a post-apocalyptic musical comedy.