By now, you’ve heard how exhausted Stan Lee looked to be at points during last weekend’s Silicon Valley Comic Con. Many fans expressed concern at his condition — this is a 95-year-old man who just recovered (or, really, is still recovering) from pneumonia. To say his autograph and photo op schedule was aggressive would be an understatement.

At the same time, Stan has been at the center of some weird stories over the past few months — the weirdest of all being that associate Jerry Olivarez drew Stan’s blood to create a collectible. That turned out to be true — though Stan’s cooperation in the matter is unclear — as signed and authenticated copies of Rise of the Black Panther #1 showed up in Las Vegas, with a stamped Stan Lee signature in “Solvent DNA Ink.”

For the past few months, it seems Stan’s well-being is nothing but controversy. Yesterday, the Hollywood Reporter ran an excellent piece laying out what has been going on and why many fans and many comics professionals are extremely concerned.

Before going further, I do want to offer up that at some points during SVCC, Stan did seem alert and happy to be there. And that’s worth noting, too — Stan Lee has always loved his fans and been energized by them. I don’t think anyone disputes that. This video released by SVCC on Facebook shows a good moment:

Congratulations, Julie & Santos on your engagement today at #SVCC! Longtime friends, Julie & Santos ran into each other by chance at the first Silicon Valley Comic Con, coincidentally as Santos was leaving a Stan Lee photo op. They began dating shortly thereafter, and celebrated their first anniversary as a couple at last year’s con. Santos had plans to make this year’s con even more memorable for Julie, and we were all happy to help make it happen.

But there were also darker moments — fans claiming that Lee was being guided through his signings, with right-hand man Keya Morgan explaining to Stan how to spell his name as he signed. Some say Stan fell asleep as he signed — definitely looking overworked. Despite the video above, he appeared strained in several photos posted by fans. And I admit, I participated, excited to give my son the opportunity to finally meet Stan. Here’s a video of a Stan signing:

The bowler-hatted Morgan was there for it all, and Stan’s daughter JC, who herself has been at the center of stories swirling around Stan, claimed to Bleeding Cool that she had been blocked from seeing her father over the weekend, and left SVCC early on Sunday “…at the advice of her lawyer.” Though Morgan claims that he has been a friend of Stan’s for 10 years, up until last Fall the man accompanying Stan to conventions was bodyguard/handler Max Anderson, who was recently let go under controversial circumstances. On Bleeding Cool, comics legend Neal Adams wrote an open letter pleading for intervention, coming to Anderson’s defense.

Bleeding Cool founder Rich Johnston also notes that he spoke to Morgan on Friday — and according to Johnston, Morgan’s response was that “…he didn’t know who Adams was, but he said I shouldn’t take the word of someone who had just shaken Stan Lee’s hand at a show over someone who had shared Thanksgiving with him.” I’m sure that Adams shook Lee’s hand more than a few times back in the 1960s when he drew X-Men and The Avengers, but that could be just a guess.

In the wake of the Hollywood Reporter article, filmmaker/podcaster and legitimately long-time friend of Stan Kevin Smith offered to let Stan move in with him. And here’s one more video of Stan from SVCC, taken by my friend Evelyn Huynh as Morgan and a security detail moved Stan from Friday night’s photo op to his hotel room:

If you were at Silicon Valley Comic Con, you probably formed your own opinion. And I want to stress that their reasons for having Stan were legitimate and heartfelt — in 2016, he was there cutting the ribbon with Steve Wozniak, and it was originally billed as being Stan and Steve’s convention (though Stan stepped that back in his announcement video a few weeks ago). After so much concern swirling around, it should have been a nice bow for Stan to appear and say farewell to Silicon Valley fans. And now, most of us just wish that he could retire from public life, given grace and dignity in whatever time he has left.

Read the Hollywood Reporter article, and watch the videos at the end that Morgan sent to the site. They’re dated April 7, which means they were possibly shot at Silicon Valley Comic Con — as you can see that behind Stan there’s a hotel room door. The murmuring had started Friday night. Did Morgan shoot these Saturday morning, when fans said Stan had had a chance to rest?

Admittedly as an outsider, I have no solid answers. Everything Morgan says could be on the up and up. I’ve heard from more than one person formerly close to Stan that he does indeed have problems with failing eyesight, and if you’ve been at any public appearance of Stan’s over the past few years, you’ve noticed his hearing is failing, though up until the pneumonia, his energy had not.

I’ll stress again, work and the love of his fans have given him energy, especially last summer after Joan, his beloved wife of 70 years, passed away. Within a week of that, he was attending an event in his honor held by Legion M, and then spent the weekend in Anaheim where he was honored as a Disney Legend at D23 Expo, alongside Jack Kirby. Disney even flew him to Hong Kong to tour the Iron Man Experience, and he was all over “Stan Lee’s L.A. Comic Con” in October. 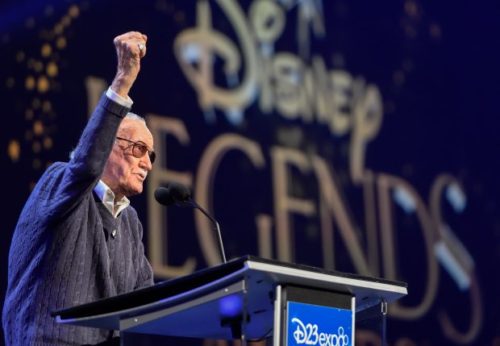 I’ve spent a lot of time the past few days in reflection over fandom’s complicity in what is happening, and I chose not to share the photo my son and I got with Stan because my boy was legitimately excited and happy to meet Stan, and I can’t ruin that. And many people were happy to meet Stan. Who wouldn’t be? But there are more questions:

So who can help Stan? He needs a legitimate elder law attorney that can investigate the suspicion of elder abuse — and look, everyone’s opinion notwithstanding, at this point it is legally just suspicion — and there needs to be a legitimate Conservator appointed that would have his best interests in mind. I do not have the answers. I am an outsider looking in, and I don’t know the whole story. Whoever does isn’t telling. Maybe legally they can’t.

The only thing I know is that as fans, we owe Stan a huge debt — he doesn’t owe us. Maybe this is a moment that fandom can use its powers for good. Stan himself taught us that with great power must come great responsibility. It’s time to take responsibility.

Special thank you to Evelyn Huynh for the video, and Nate Costa for background research.