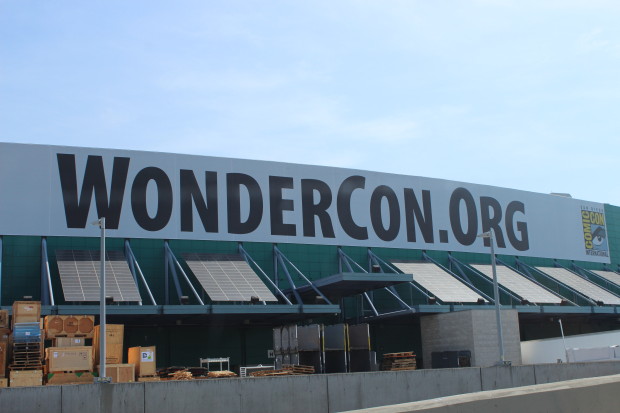 The Anaheim Convention Center is undergoing construction this year, and as a result, WonderCon spent its 30th birthday on a sabbatical to the Los Angeles Convention Center, right next to the Staples Center in Downtown LA. However, it was not all was sunshine and Cosplay, as bringing the convention to the heart of a major metropolitan city brought a whole new set of problems along with it.

The atmosphere at WonderCon this year had quite a different feel to it, and the location definitely had a lot to do with it. Those who have attended WonderCon during its residency at the Anaheim Convention Center will know that WonderCon feels like it has a protective bubble around it. The Anaheim Convention Center is sunken deep into a courtyard that is surrounded by a row of large chain hotels, including a Hilton, and a Marriot, with Disneyland just across the street.

Security gates and guards usually surround the Anaheim Convention Center, preventing people without a badge from entering the area outside the Convention Center, including the outdoor fountain, which has become a staple background for WonderCon photos. Because it is surrounded by large chain hotels, the only other people who have access to the courtyard area are vacationers and conference goers staying at the hotels. 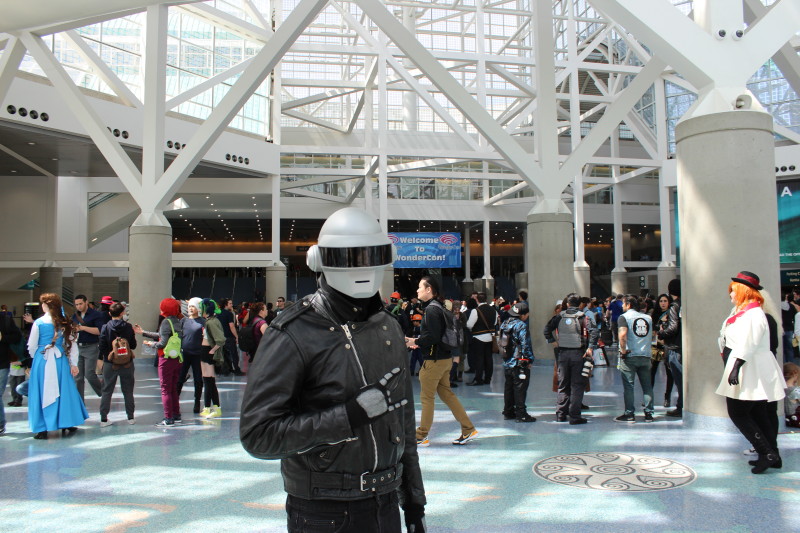 This year, however, with WonderCon set on the corner of Pico Blvd and Figueroa St in Downtown LA, it felt like that bubble had burst. There were no security gates in front of the LA Convention Center protecting Cosplayers and attendees from the outside world. There weren’t many security guards, either, leaving the South Lobby Entrance Hall, and its small outdoor courtyard, wide open to anyone who wanted to walk through its doors. Security guards and uniformed officers of the LAPD did occasionally sweep the entrance and the hallway; however, it didn’t stop hecklers and troublemakers from creating havoc. I personally watched five different people taken away in handcuffs this weekend.

Things turned particularly vicious when some uninvited guests crashed WonderCon’s 30th. Most attendees of both WonderCon and Comic-Con will recognize our peaceful religious protester friends that usually show up with yellow signs containing words of wisdom, and megaphones to broadcast scripture. They usually keep to themselves, and protest without incident. Most of these protestors are normally not allowed beyond the security gates of the Anaheim Convention Center, keeping them separate from the Con attendees.

This year, our friends with the yellow signs were no-shows. They were replaced by something far worse… 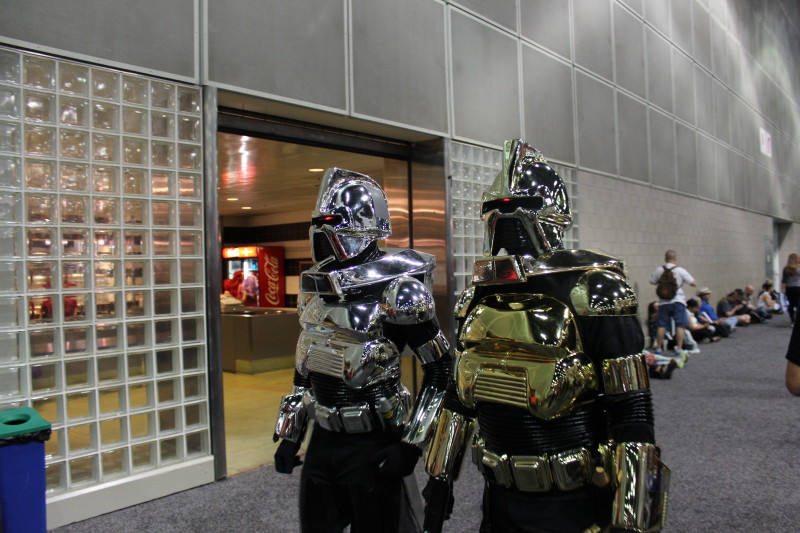 No, these would have been better…

About 1:30PM on Friday, a more radical group of religious protesters took their place in the courtyard just outside of the entrance to the LA Convention Center. This group consisted of one man dressed in Army fatigues holding a frighteningly realistic looking AR-15 assault rifle (in fact, it may have been real), and another large, imposing man with a shaved head and a mustache, who looked more like Tom Hardy’s stunt double from the film Bronson than a religious protestor. The two men immediately began spitting hateful rhetoric from a megaphone, saying horrible, deplorable things about Geek Culture in an attempt to get a reaction out of Con attendees. When that failed, the bald man began singling out and “slut-shaming” nearby female Cosplayers for their wardrobe choices, and lack of clothing, both imposing their morals upon these poor women, and using foul language and derogatory terms that I would never repeat in person, much less print in an article.

The protestors continued to single out and verbally abuse Con attendees for about a half an hour. One WonderCon attendee eventually had enough, and engaged the bald man in a shouting match. As the argument escalated and violence seemed imminent, officers from the LAPD stepped in and ejected the protest group before it came to blows. I was happy that the Police showed up when they did; however, this situation wouldn’t have escalated that far if they’d used the same security techniques as the Anaheim Convention Center. This was just one of the many incidents and altercations that happened outside WonderCon this weekend. 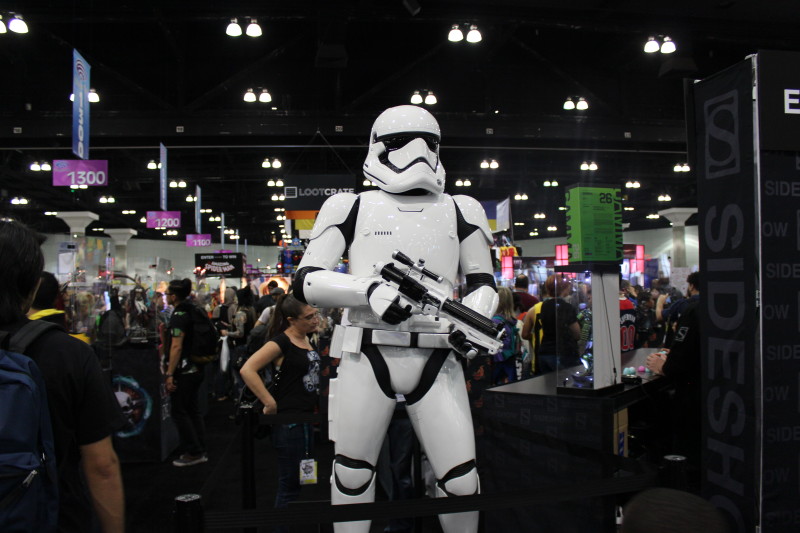 These aren’t the congoers you’re looking for…

Adding to the list of security problems at this years WonderCon was the introduction of the RFID badge. This year, every attendee over the age of 18 was issued a Radio Frequency Identification Card with their badges. The RFID cards had to be scanned whenever you entered or exited the WonderCon event, including the main floor, access to the Panel Programming, and to the upstairs flyover hallway built over Pico Blvd that connects the South Exhibit Hall to the West Exhibit Hall. Security here ruled with an iron fist, and denied anyone whose scan turned up red. They didn’t, however, restrict access to the Convention Center itself, allowing anyone with two feet and a curious nature into the South Hall Lobby.

While the inclusion of the RFID badges may sound like a good way to improve security and prevent ticketing fraud on paper, when put into practice, it simply didn’t work. There were only three points one could enter and exit the WonderCon main hall, leading to bottlenecking, and some long lines just to enter and exit the main floor in the South Exhibit Hall. The major problem with the RFID badges was that they didn’t always work. If you forgot to scan in or out of the room you were entering or exiting, you were locked out of the system and denied access to the floor, or the panel you were attempting to see, until you went to the Security Desk and had them reset your badge, or issue you a new one. I know in my case, even though I swiped in and out at every scan post I saw, my badge didn’t always work. I had to visit the Security Desk twice over the three day event, and have a new RFID card issued to me once. My colleague, however, was locked out of the event every day, despite having a 3-Day Professional Pass, and had to be issued a new RFID card each day before even being allowed to enter the South Hall floor. 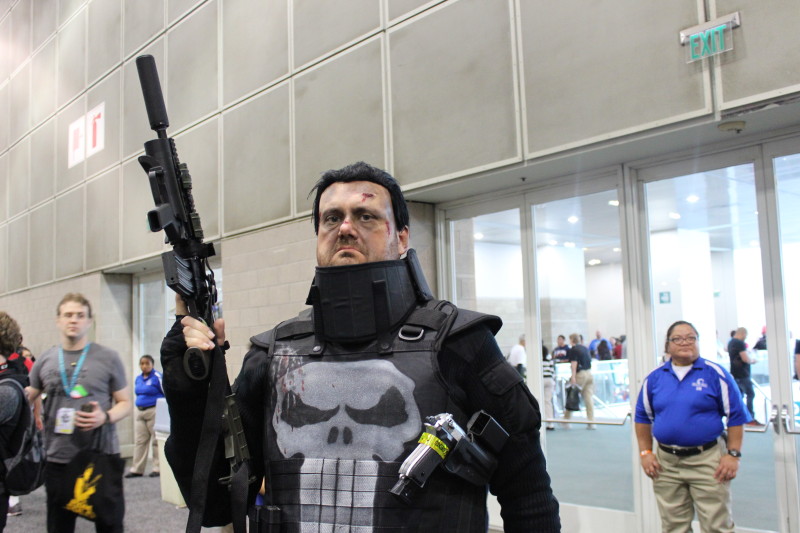 If you are a WonderCon panel enthusiast, this year was also a little harder to navigate. The panel programming was spread out through all three floors, which made getting from panel to panel a little difficult, and in some instances, even harder to find. Most of the high end panel programming, such as The Nerdist Panel, the Warner Bros/New Line Presents Panel, the “Legends of Tomorrow” panel, and the other large scale announcement panels were held in the Microsoft Theater on the other side of the Staples Center, one whole city block away from the actual convention. There were shuttles that took you there, however, they were packed pretty tight, and people were encouraged to walk if possible.

I know everyone complains about traffic and parking in LA, however, Sunday’s parking situation in Downtown was pretty abysmal, as people trying to get into WonderCon were also confronted with the traffic and security for the Clippers game happening at the Staples Center at the same time, right next door to the LA Convention Center.itself. As I said previously, it felt like our little WonderCon bubble had burst. 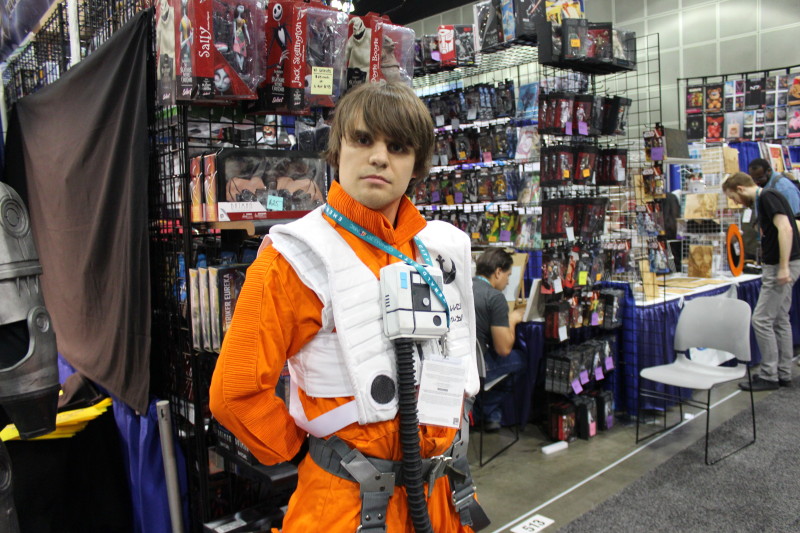 Tensions ran a tad higher than usual on the main floor, from Exhibitors and Cosplayers alike. There was a large security, and police presence on the Main Floor this year, and while one could argue that they were necessary to keep the peace, it definitely had a “they are watching us” effect on the mood of the room. A lot of attendees seemed grumpy and unapproachable, Cosplayers seemed hassled and irritated by people asking them for photos, and a good chunk of the vendors seemed to be annoyed and inconvenienced by the people patronizing their booths.

There was a great deal of shoving this year, as well. There were a few moments where it felt like the floor was about to erupt into a giant mosh pit while people argued over who was first in line for photo ops, or signings. I, for one, sustained a foot injury when a Jedi Cosplayer pushed me out of the way to beat me to a mockup of the Enterprise Captain’s Chair at the Star Trek booth. That is just one example of the high tension on display at WonderCon 2016.

One advantage of having WonderCon in the heart of Los Angeles was the easier access to the Con for entertainment professionals in Los Angeles. WonderCon regulars like Neal Adams and Jim Lee did make appearances, but so did some large name celebrities like Kristen Schaal and Edward James Olmos, who told me that the only reason he attended was because it was closer to his home this year. The panels also felt more entertainment oriented this year, being located in LA, the Con was able to draw in both big name talent, as well as some of the unsung heroes behind the scenes of some of your favorite nerdy movies and TV Shows. 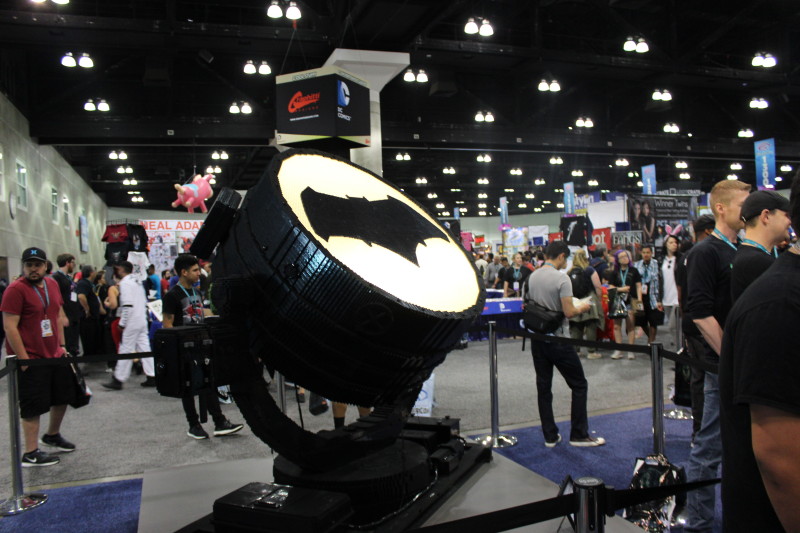 The Main Floor itself felt a little lackluster this year. There was no Marvel presence at WonderCon, as per usual; however, the DC presence felt a little light. Their booth consisted of a signing table, a “Teen Titans Go!” banner, and a “Batman v. Superman” inspired Bat-signal made out of Legos, but not much more than that. Other indie publishers, such as IDW, Valiant, and Top Cow were there, but also on a smaller scale. There was no Dark Horse presence at all. There were some other large Exhibitors on the floor, such as The Nerdist booth, a Capcom arcade, and Teenage Mutant Ninja Turtles photo op, but overall, the Con felt a little light this year.

Hopefully, WonderCon’s return to Anaheim next year will bring our bubble back. 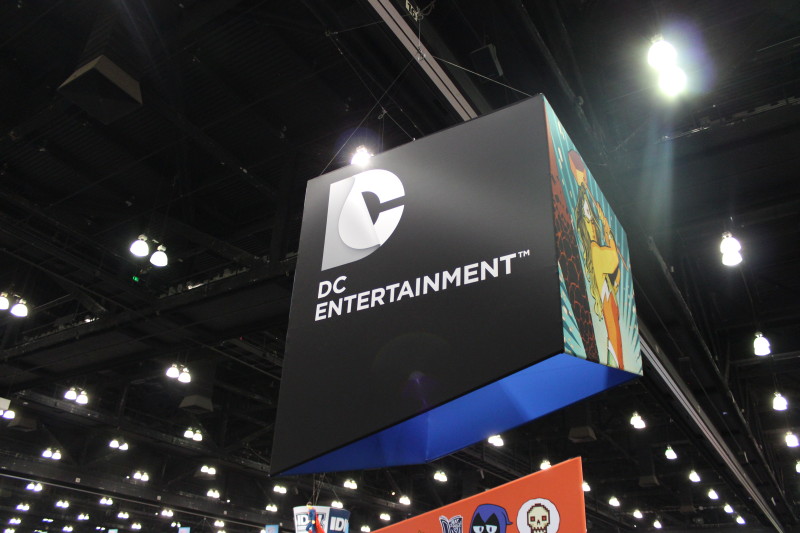 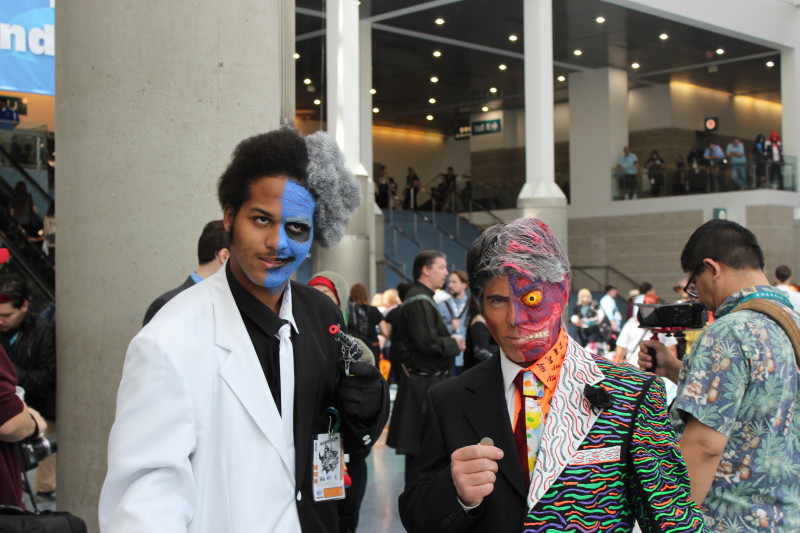 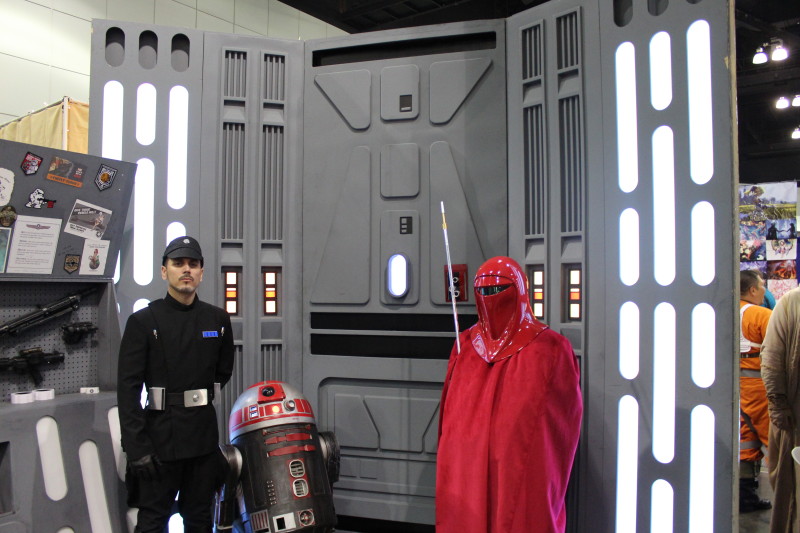 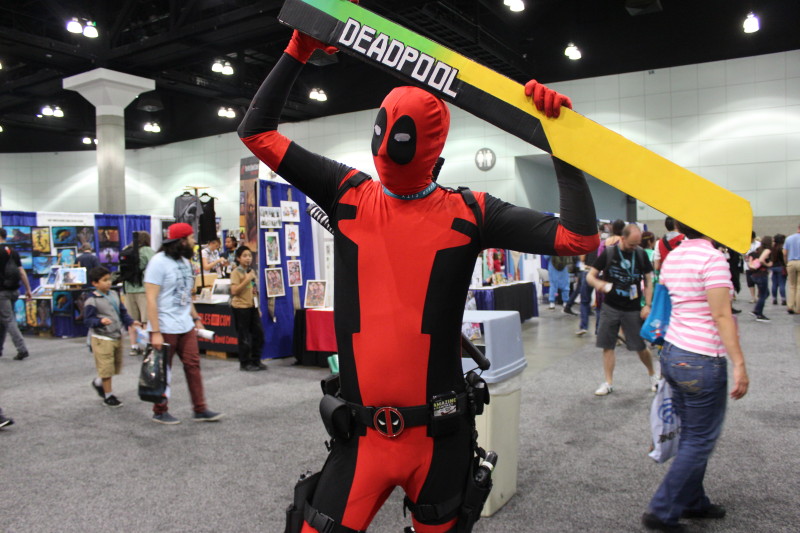 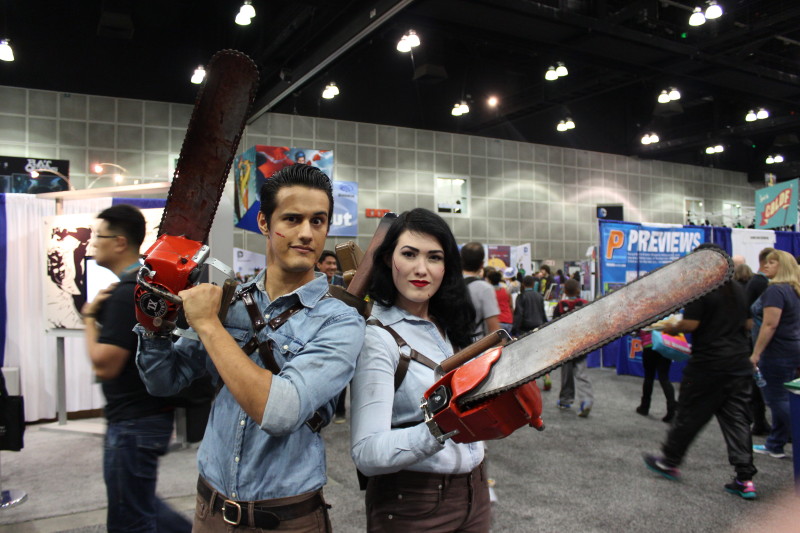 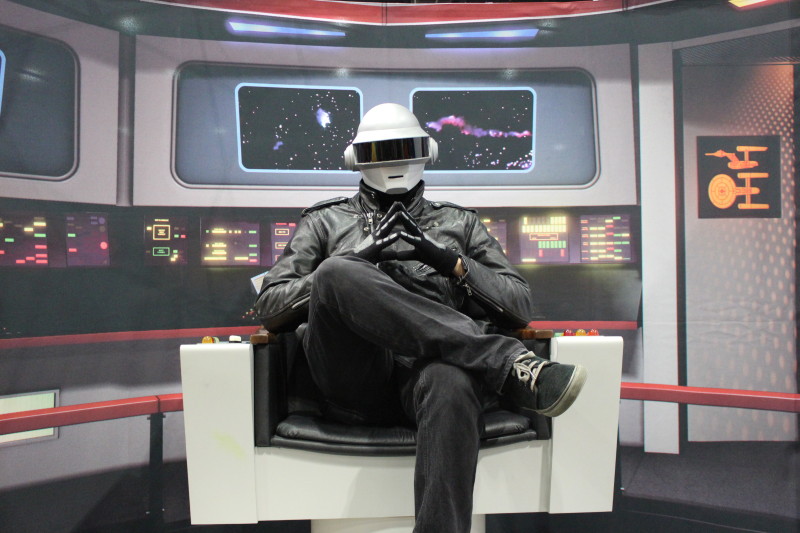 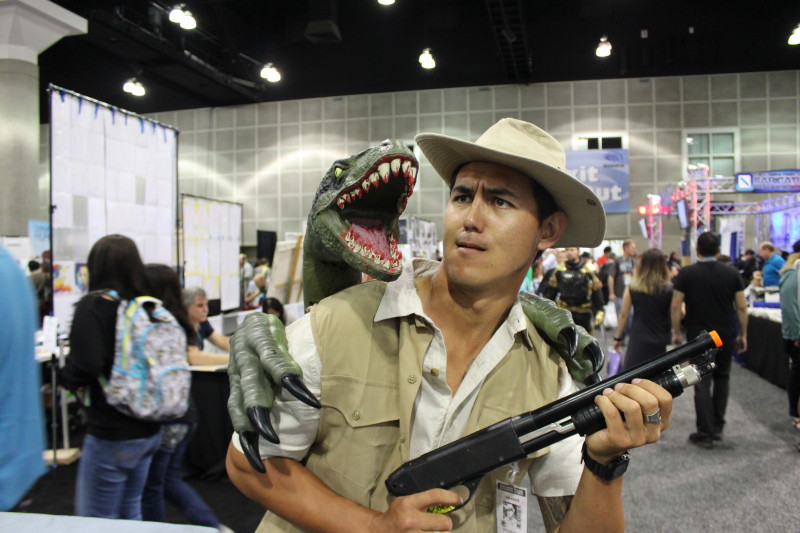 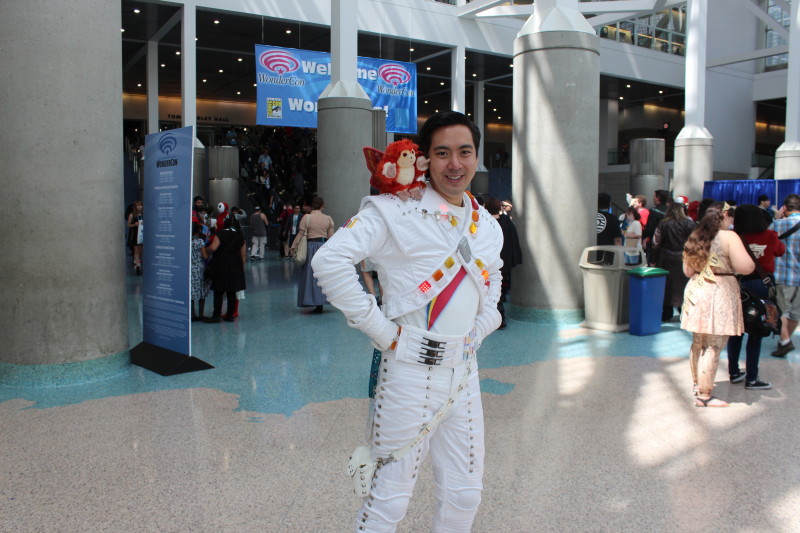