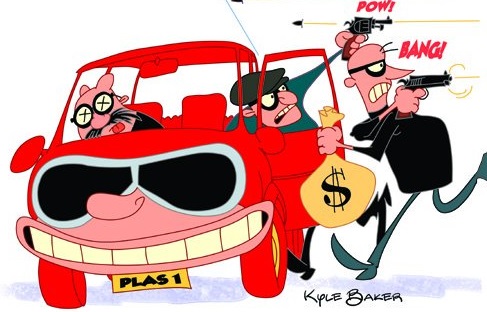 Sometimes a project and an artist seem destined for each other. While even Kyle Baker admits that a few years ago he wouldn’t have thought of himself as being the perfect Plastic Man artist, it’s one of those “but of course” moments. But of course Kyle Baker has the perfect sensibility to recapture the magic of Plas, something that in truth, few other than his creator Jack Cole have been able to do.

In the past year, Baker attracted controversy over his work on Marvel’s The Truth: Red White & Black, an expansion of the Captain America mythos. His style was not quite what fans expected, though it was exactly what Marvel wanted. People are still debating that one. But if The Truth turned you off Baker, look again. Aside from being a facile and ingenious cartoonist, he’s a gifted artist and storyteller. Don’t believe me? Check out Why I Hate Saturn or the moving and thought-provoking King David.

Baker took a little time out with me at San Diego to talk about the Plastic Man project, which we’ll cover first in part one of this interview. The jovial artist was warm, friendly, and honestly one of the best experiences I’ve ever had interviewing a creator. Good thing, too, because, yeah, I’ve been a fan since his days working on DC”s version of The Shadow. 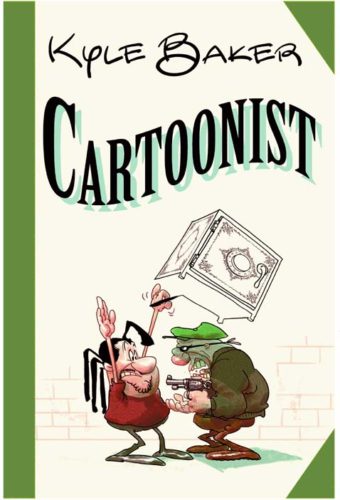 Derek McCaw: How did you get involved with the Plastic Man project?

Kyle Baker: DC called me and said we want you to do one of our characters and do your thing. Preferably somebody who could use the help. You know, rather than Batman or Superman, some character that’s kind of finished. They were pushing for The Creeper, and I read some Creeper books and his power is his clothes change, and I couldn’t figure out what to do with that. So I said, why not Plastic Man?

Because I did a Splash Brannigan story that Alan Moore had created (for America’s Best Comics), and Alan has a real knack for seeing things in my work that I don’t. He sends me a script all the time, I’ve done some other ABC stuff, and I’ll think “why did he send this to me?” And then I do it and I go, “hey, I’m actually good at that.” So he sent me Splash Brannigan. I said, all right. I’d rather do some other story, but all right, I’ll do it. And it turned out I really had a knack for it.

DM: So that led you to Plastic Man.

DM: You’ve talked a lot about going back to Jack Cole. Have you been influenced editorially at all, did they give you any limitations?

KB: No. The whole point of the thing, they keep saying…I’m actually pushing more for things like maintaining continuity and stuff than they are. You don’t want to throw the baby out with the bathwater. I keep asking, “Can I do this?” And they’re like, you know, “we’re selling it as Kyle Baker’s Plastic Man. You’re kind of the hook.” It’s that Kyle is doing something…

It’s like when Pete Bagge did Spider-Man or Jim Kochalka did The Hulk. You’re picking up to see what Pete Bagge does to Spider-Man. If you picked it up and Pete Bagge was drawing like John Romita…well, he’d probably do a sh***y John Romita for one thing. You know what I mean? You’d be disappointed.

So usually when people call me up now, like for Captain America or for this, they’re like “do your thing and go nuts.” And it’s usually me who likes the character so much that I don’t want to screw around with it too much. So I kept everything like Woozy Winks. And the story is old Plastic Man stuff.

DM: So you’re going back to the Cole continuity, if there is such a thing. Justice League left an opening for you. 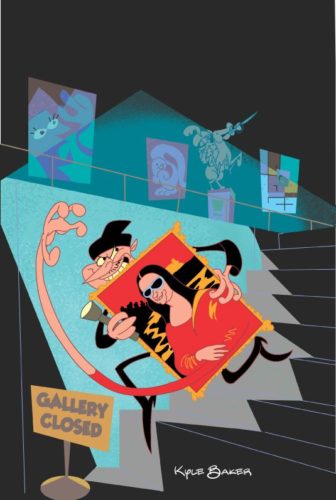 DM: Are you finding it difficult to balance where he was used more seriously in Justice League? When we’d last seen him, he was now 30,000 years old, and wanted to find his son. That seems more soap operatic than I think you’re doing. You’ve gone back to the fun, and they left him on such a sad, but beautiful, note.

DM: That was the doorway they left you, and you haven’t read the doorway…

KB: I haven’t read it. I’m waiting for the trades. I look at the trade paperbacks. I’ll address that. I’ll have him make some reference to that. I didn’t know.

But no, the thing is, I just finished working on Looney Tunes. And a lot of this stuff is getting things back to what made them work. It’s the same thing when they hired me to do Looney Tunes: “Bugs Bunny is washed up, nobody’s interested in the toys, we had to close the Warner Stores, we need to freshen Bugs Bunny up.”

Me and the other writers said, “you don’t need to freshen him up. You’ve got to get back what was working about Bugs Bunny. You’ve managed to cut out everything.” And it’s the same with Plastic Man. My problem with the Justice League stuff is that he never turned into anything. His neck always got long. He’s Plastic Man and that’s the joke. The old formula was straight crime story. He finds some kind of crime committed. He has to track down the criminal, and he has to fight the criminal. But he uses his clever powers.

He doesn’t fight a criminal the way Superman does. Superman would pick up a car, or use rays out of his eyes or something. Plastic Man would usually try to trick them. He might disguise himself as the criminal’s henchman, or even the criminal’s car. Guy gets in the car and it turns out to be Plastic Man – things like that.

That’s the other thing – there’s always the surprises. When you’re reading the book, you start looking for the red object. And so do the criminals a lot of times. They’re like, “wait a minute! That red table must be Plastic Man!” and they shoot the table full of holes. And it turns out to be he’s the bullets. 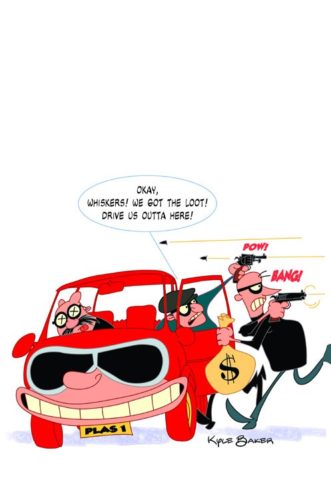 DM: What’s been the most fun thing about working on Plastic Man?

KB: For one thing, I like the fact that I don’t have to deal with anatomy. That’s refreshing. It’s impossible to draw the guy wrong.

DM: It was originally announced as a mini-series. So now your first four issues look to be definitely in the spirit of Cole, but I’ve read that the next is this big continuity heavy thing. Are you going to be parodying the whole crossover thing?

KB: Not really. Everything I do…I’m more for entertainment value, and I’m more a classical storyteller. You try to have a beginning and an end, and the character has to have a clear goal. Superhero stories, I get confused. I see what is selling, and even just judging from the response I’ve gotten from getting back to regular superhero stuff, like Captain America…I’ve been getting comments from the fans and stuff. You just have to relearn the market.

I’m from the old school. The last time I did comic books was in the eighties, and we used to have certain rules that don’t seem to apply anymore. One was, don’t use a lot of dialogue, because most of the readers were children. We also used to have what (Jim) Shooter used to call the Popsicle principle, which was that your competition was a Popsicle. Your price could never go above the price of a Popsicle. Your customer is a kid in a Seven-Eleven. He comes in with a dollar his dad gave him, and he’s like he can buy a Popsicle, a candy bar, play Space Invaders or buy a comic book.

The other thing was, you always had to assume that the reader had never read your comic book before. So every month, Daredevil had to say, at some point in the story, “ever since the accident that blinded me, I’ve had superpowers.” Just for the kid that this was his first issue of Daredevil.

And now I pick up books and I want to get into them. And I can’t get into them because they’re so inside, and I’ve been doing it for twenty years. I pick up an issue of Justice League, and I can’t tell you what’s going on. And it seems to be, I keep going back to this example, and I hate to pick on this book, but – Jim Lee’s Batman. I love Jim Lee. I picked it up because I like the talent involved and stuff, but that’s the example. I picked it up. I haven’t read a Batman book in ten years, and I thought “I love these guys, I’m going to check it out.”

For example, Poison Ivy shows up with Superman. And Superman starts beating the crap out of Batman. Thank God I saw the Uma Thurman movie, because there was no mention of the fact that Poison Ivy is a woman who kisses people and turns them evil. There was never a scene of Poison Ivy kissing Superman. Ever. They just show up together. Poison Ivy never does anything except pose. So it seems to me that the fans really like stuff that’s super self-referential and so continuity-heavy. 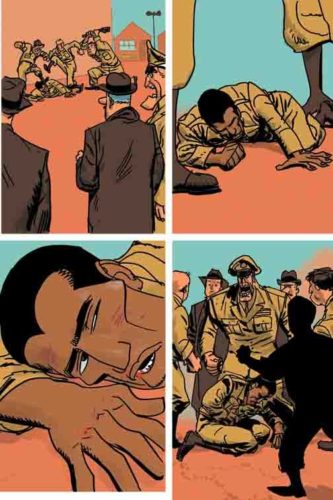 Everybody was upset because our story started at Pearl Harbor and (deepens voice) everybody knows the first issue of Captain America was before Pearl Harbor, and then our twist was that Captain America had been around all along, and the government was trying to reproduce the formula. The doctor had been killed.

Once that happened, everybody was like, oh, we love you. It seems to me that the fans care more about that sort of thing. And the fans really seem to be paying lots of money — and that’s why I’m not knocking it and why I’m going to do it – fans seem to want to pay lots of money for photorealistic images of superheroes not using their powers.

Full page pin-ups of superheroes standing around for photos.

So the second arc is going to be me posing my most muscular friends in photographs, and then tracing the photograph. Having them stand around and talking. Characters just show up and refer to previous episodes because fans really seem to enjoy that. And I want to see if the sales go up. And I’ve discussed it with Joey (Cavalieri).

This is what is selling. I’m not making this up.