With Wonder-Con 2017 less than a week away, it’s only fitting to revisit a dream we first found out about there in 2015 — the Hollywood Science Fiction Museum. Curating props, sets, costumes, and other memorabilia from important science fiction movies and television shows, the Museum doesn’t have a permanent home yet, but they will be touring an exhibition in late 2017.

At WonderCon, they will feature something that founder Huston Huddleston thought was lost — and so did most fans. Early in the 1970s, the seven main cast members of Star Trek were recreated in wax for the Movieland Wax Museum, and as Huddleston points out, only a few years after the series went off the air, so even age-wise, these figures looked close to how the actors appeared on the series.

But the Movieland Wax Museum, located in Buena Park near Knott’s Berry Farm, closed in 2005 and auctioned off all their figures, and the Star Trek set and mannequins disappeared. It turns out that one collector had them all, and offered them to the Hollywood Science Fiction Museum.

Next week at WonderCon 2017 in Anaheim, the set and the figure of Leonard Nimoy as Mr. Spock will be on display. The full cast will be in the touring exhibition.

So how can you help? Well, these figures need a little restoration. Apparently whoever had run the Wax Museum in the 90s “spruced them up” without great attention to detail. But make-up wizard and Hollywood Science Fiction Museum board member Greg Nicotero plans to redo all that and bring the figures back to their original glory. It’s just going to take a little extra funding for the non-profit organization to do it.

They’ve launched a Kickstarter campaign which ends this week — if I’d known earlier, I’d have boosted the signal earlier. I begged my parents to take me to the Movieland Wax Museum when I was a kid in order to see these figures, and somewhere I have a photo taken with an extra William Shatner figure. Believe me, for my parents, this was a sacrifice.

If you’re interested, help out. It is tax deductible, and let’s face it, fans, it really is up to us to help save our culture. 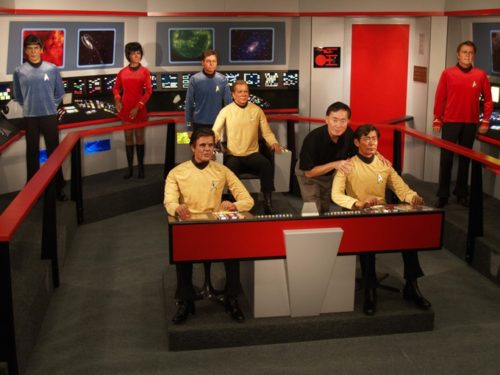